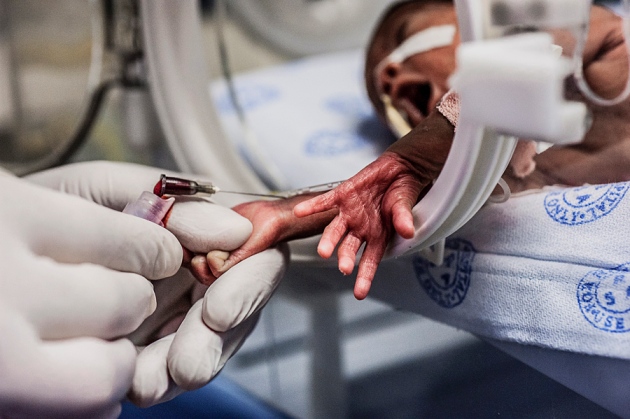 The genomes of ill newborns can be sequenced in less than 24 hours to give clinicians a rapid diagnosis.

By two months of age, the boy was near death. He had spent his entire short life in the neonatal intensive care unit (NICU) at Children’s Mercy Hospital in Kansas City, Missouri, while physicians tried to work out the cause of his abnormalities. When his liver failed in April 2013, the medical staff warned his parents that the outlook was grim.

Then geneticist Stephen Kingsmore and his team at Children’s Mercy took on the case. Within three days, they had sequenced the genomes of the baby and his parents, and identified a rare mutation that was common to the child and both of his parents. The mutation turned out to be linked to a disease in which an overactive immune system damages the liver and spleen. Armed with a diagnosis, the baby’s physicians put him on drugs to lower his immune response. The boy is now at home and healthy. Had physicians sent his DNA off for a conventional genomic test, the diagnosis could have taken more than a month — by which time he would probably have died.

The boy is one of 44 sick infants whose genomes Kingsmore’s group has sequenced using a process that can provide a diagnosis in as little as 24 hours. In 28 of these cases, the researchers have been able to diagnose the baby’s condition. And in about half of these, they have been able to recommend changes in treatment, Kingsmore reported on 19 September at the Genomics of Common Diseases meeting in Potomac, Maryland. On 6 October, his group will kick off a larger project to sequence hundreds of babies’ genomes. It will be the first of four newborn-sequencing studies that each received multimillion-dollar grants from the US National Institutes of Health (NIH) in September 2013. The studies will address both the feasibility and the ethics of a process that could soon become standard for inexplicably ill newborns.

Over the next five years, Kingsmore’s group will sequence the genomes of 500 sick babies from the Children’s Mercy Hospital NICU and compare the infants’ clinical outcomes with those of 500 NICU babies who are diagnosed using conventional genetic and metabolic tests. The researchers will assess whether rapid sequencing allows babies to avoid unnecessary tests and unhelpful treatments, and whether it helps parents to make decisions about care when the child is diagnosed as having a fatal disease. Even when an infant does die, Kingsmore says, a genome sequence and diagnosis can provide closure to parents and give more information about the genetic conditions they carry.

Kingsmore calls the rapid sequencing technique a ‘factory’ approach, in which four or five specialists each perform one step of the process — from the blood draw to the final diagnosis — as quickly as possible. The group collects DNA from both of the parents and the baby to quickly identify mutations in the child’s genome, then sequences the DNA and uses custom software to target specific parts of the genome on the basis of their symptoms. After making a gene-based diagnosis and delivering relevant information to the baby’s physician, the group stores the sequence data anonymously in a secure database for use in future studies.

“Everybody is keen to see whether this is the start of a new approach.”

Misha Angrist, a genomic-policy expert at Duke University in Durham, North Carolina, says that although the 24-hour genome process is impressive, it is not clear whether genomic sequencing of newborns will soon become standard practice. Many questions remain about who will pay for sequencing, who should have access to the data and how far clinicians should go in extracting genome information that is unrelated to the disease at hand. Then there is the question of how informative the process is. “I think it’s really important that we do these experiments so that we start to see what that yield is,” Angrist says.

So far, only the Kansas City team has been cleared to begin trials, thanks to a waiver from the US Food and Drug Administration (FDA) that allows sequencing of very ill babies. Normally, a test must be experimentally proven before being used to diagnose patients. “These are very pioneering studies,” Kingsmore says. “I think that everybody is keen to see whether this is the start of a new approach at FDA, and whether it will happen in the future with similar studies.”

The other NIH-funded teams are awaiting approval from the FDA or from internal ethics-review boards. In Boston, Massachusetts, a group led by physicians Alan Beggs of Boston Children’s Hospital and Robert Green of the Brigham and Women’s Hospital is planning a study of 240 healthy babies and 240 from NICUs. The team will randomly sequence the exome — the protein-encoding portions of the genome — for half of each group of infants to determine whether those data alone can improve children’s health. Exome sequencing is cheaper, albeit less comprehensive, than whole-genome sequencing.

A third team, led by geneticists Cynthia Powell and Jonathan Berg of the University of North Carolina in Chapel Hill, plans to sequence the genomes of 400 babies with known genetic diseases, such as cystic fibrosis, to see whether they can glean extra information about the disorders. And medical geneticist Robert Nussbaum’s group at the University of California in San Francisco will sequence exomes from 1,400 blood­spots, previously collected from infants at birth, to determine whether this information is useful for diagnosis.

Each team includes ethicists who will grapple with questions such as disclosing information that is unrelated to the diagnosis. “People are sensitive about the power of information in genomics and rightly so,” Green says. Those concerns are magnified when they involve children.