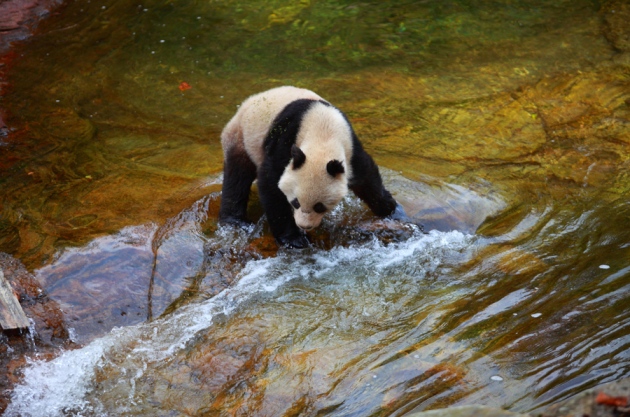 Wild pandas, such as this bear in Shaanxi Province, may be recovering their ground in China.

The number of giant pandas living in the wild has risen by a sixth over the past decade, according to a long-anticipated survey unveiled by China’s State Forestry Administration on 28 February. But experts say it is unclear whether the results can be compared to previous national counts. The argument is bound to re-ignite the debate over whether the iconic bear should still be categorized as an endangered species.

At a press conference in Beijing, deputy forestry minister Chen Fengxue said that thousands of people combing 4.36 million hectares of forests in Sichuan, Shaanxi and Gansu provinces from 2011 to 2014 had found evidence of 1,864 pandas living in the wild. The previous survey, conducted in 1998–2002, reported 1,596 pandas. The rise, said Chen, is a result of conservation policies that encourage forest protection and restoration. The survey shows that about two-thirds of pandas reside in the country’s 67 nature reserves — including 27 reserves that were created in the past decade. Overall, the area in which wild pandas live has increased by 11.8% to 2.58 million hectares.

"I am pleased that there seems to be an increase in pandas," says David Garshelis, a conservation biologist at Minnesota Department of Natural Resources in Grand Rapids and co-chair of the Bear Specialist Group at the International Union for Conservation of Nature (IUCN). But the extent of this increase is questionable, he says. The latest study — China's fourth national panda survey since the 1970s — searched an area around 72% larger than the previous count, making it hard to compare the two figures. Garshelis also wants to know the survey's margin of error, which — as in the 1998–2002 study — was not given.

Wei Fuwen, deputy director at the Institute of Zoology at the Chinese Academy of Sciences (CAS) in Beijing and chair of the scientific committee of the fourth panda survey, says most of the larger region combed relates to new potential habitats resulting from conservation efforts since 1998-2002. He doesn't think this greatly confuses the comparison with the previous survey. The way the survey was conducted means a margin of error can't be calculated, he adds.

The survey has important implications for the conservation status of pandas, says Garshelis. If the IUCN agrees that the panda population is increasing, there would be a five-year waiting period to assess the stability of the situation before the bear's conservation status was downgraded to 'vulnerable', he says. IUCN only categorizes a species as 'endangered' if its total mature population numbers less than 2,500 and that population is declining (or if the largest single population cluster has fewer than 250 individuals). But the IUCN is likely to maintain an "endangered" listing for pandas despite the survey findings, he adds, because cliamte projections suggest habitats hospitable to bamboo will decline in future.

Not black and white

Critics have often questioned the integrity of China’s panda surveys, arguing that they are highly influenced by the political motives of government officials and conservation groups alike. “It’s a fine balancing act, so officials can claim the credit for rising panda populations but the number is not too high to diminish conservation funds,” says a Beijing-based researcher who works closely with the forestry ministry and asked not to be named.

There are also concerns about the methods used to estimate panda numbers. The bears' reclusive nature and mountainous habitat make direct counting impossible, so the survey combined two indirect counting techniques. The first method, genotyping DNA extracted from mucus in faecal samples, can give higher numbers than the more traditional approach: studying the length of intact bamboo fragments left in excrement to identify individuals by the size of their bites. 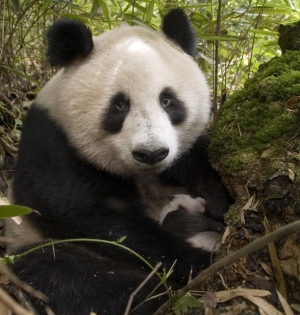 In areas where panda populations are relatively dense, the bite-size method can “grossly underestimate” the number of animals, says Wei Fuwen, deputy director at the Institute of Zoology at the Chinese Academy of Sciences (CAS) in Beijing and chair of the scientific committee of the fourth panda survey. A DNA-based study in 2006 showed, for example, that there were 66 different bears in the Wanglang nature reserve in Sichuan province, more than double the 27 found in the reserve by bamboo inspection in the 1998–2002 survey1. In more sparsely populated habitats, the two counting methods are likely to give more similar results, Wei says.

The new survey relied mainly on inspection of bamboo in faeces; only 1,308 droppings were subjected to DNA analyses, representing 336 individuals. Wei says the DNA method, when used, did give a higher count, but neither he nor the forestry ministry would reveal the difference.

One thing that even the fiercest critics agree on is that the panda population is far from safe, even if it is actually increasing. “While earlier threats of poaching and deforestation have largely become a thing of the past, panda habitats are increasingly fragmented by roads, railways, dams and mines,” says Ouyang Zhiyun, deputy director of the CAS Research Centre for Eco-Environmental Sciences in Beijing.

The survey shows that although their total habitable area has increased in the past decade, pandas now dwell in 33 isolated populations separated by insurmountable physical barriers — up from 15 in the last count. Twenty-two of these populations each have less than 30 individuals and are at high risk of extinction.

“This could have devastating consequences,” says Fan Zhiyong, director of the species programme of the WWF China conservation group. “There is an urgent need to stop further habitat fragmentation and to construct ecological corridors to connect isolated panda populations.”