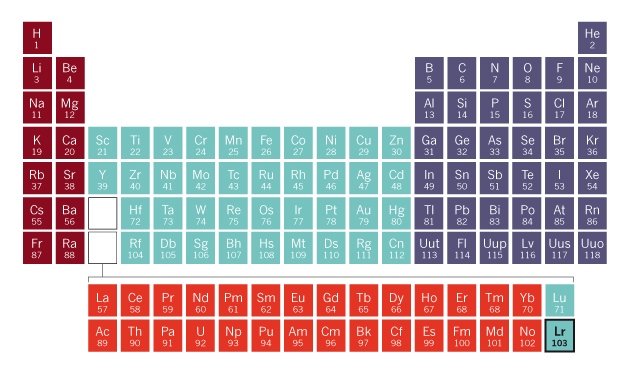 Physicists have measured the ease of taking an electron from lawrencium (element 103), which sits in the f-block annex of the Periodic Table.

Measurements of an artificial radioactive element called lawrencium could revive an arcane controversy over the element’s position in the periodic table — and the structure of the table itself.

An international team of physicists and chemists reports in Nature1 that it takes very little energy to strip an electron out of an atom of lawrencium, element 103. The measurement is a tour de force of chemistry, because the radioactive element does not exist in nature, can be synthesized only in vanishingly small amounts, and lasts for mere seconds.

Lawrencium, named after physicist Ernest Lawrence, the inventor of the cyclotron particle accelerator, is the heaviest element for which researchers have yet measured the fundamental property known as the first ionization energy — the energy required to turn the atom into an ion by ripping out its most easily accessible electron. That measurement underpins researchers’ understanding of an atom’s chemistry, but until now had been known only for the elements up to einsteinium (atomic number 99).

Researchers at the Japan Atomic Energy Agency (JAEA) in Tokai created lawrencium by firing boron atoms at a target made of californium — itself an artificial isotope. That produced one atom of lawrencium-256 (an isotope with 103 protons and 153 neutrons) every few seconds. The isotope's half-life is about 27 seconds.

The researchers captured these atoms in a mist of cadmium iodide and deposited them onto a metal surface heated to more than 2,700 kelvin. The intense heat was enough to kick one electron off some of the atoms, and by counting how many of the atoms were ionized in this way, the team was able to calculate the energy it took — only 4.96 electronvolts, which is unusually low, says JAEA chemist Tetsuya Sato, a co-author of the paper. It is the fifth-lowest first ionization energy in the periodic table.

The experiment implies that lawrencium’s outermost electron is very loosely bound, similar to that of the elements in the leftmost column of the periodic table, such as sodium and potassium. That matches a theoretical prediction by co-authors at Tel Aviv University in Israel, and may inform a debate about where the element should sit in the periodic table.

The periodic table is arranged into columns and blocks that are supposed to mirror how elements’ outermost electrons are arrayed. Elements are grouped into sections called s, p, d and f blocks — mirroring the names given to distinct types of electron orbital. (Orbitals are fuzzy regions of space that electrons are most likely to occupy around an atom’s core, as calculated using quantum theory: s denotes a spherical region, p refers to a dumb-bell-shaped region, and the others are more complicated). The ease with which outermost electrons can be removed or added to an element determines the element's chemical reactivity — which is why elements in the same column of the table tend to have similar chemical behaviours.

Some chemists argue that lawrencium (and its cousin lutetium, one row above it in the table) has similar chemistry to scandium and yttrium at the left of the table’s d-block, and should sit under these two elements. Many standard periodic tables disagree: they place lawrencium as the last element of two rows of 30 elements called the lanthanides and actinides (because the two rows start with the elements lanthanum and actinium), and put both rows as an annex at the bottom of the table. Other tables, including the one provided by the International Union of Pure and Applied Chemistry (IUPAC), chemistry’s governing body, argue that the f-block annex in its entirety belongs in the two spots beneath scandium and yttrium, essentially a sub-unit of the d-block.

For all the talk of d-blocks and f-blocks, the experiment and numerical modelling imply that lawrencium’s outermost electron actually occupies a dumb-bell-shaped p orbital. A textbook accounting of electrons would suggest that this p orbital should not be filled, but its energy is lowered by special relativity because lawrencium’s inner electrons orbit at a significant fraction of the speed of light, with cascading effects on the outer electrons. (A similar effect has been found in other elements, such as the super-heavy seaborgium.)

Some authors of the Nature paper say that their study confirms that the element belongs with the actinides in the f-block. “The very low ionization potential is wonderfully supportive of this idea,” says Matthias Schädel, who headed the JAEA's super-heavy-element group until his retirement last week. In the 1980s, he was among those who pioneered experiments that he says showed similarities between lawrencium and the f-type elements.

But William Jensen, a chemist at the University of Cincinnati in Ohio, says that the latest study shows exactly the opposite. He says that most actinides have first ionization energies that are higher than those of the lanthanides above them in the periodic table; lawrencium bucks that trend, making it more similar to d-group elements. He articulates the case for putting lawrencium in the d-block in a paper he published in Foundations of Chemistry on 21 March2.

Sato does not think that the evidence in his team’s paper answers the question either way. IUPAC does not yet have an official position on whether lutetium and lawrencium would fit better in the f- or the d-block, says Jan Reedijk, president of IUPAC's inorganic-chemistry division. “The present paper for sure might help to restart or boost this discussion.” He adds that the organization might take up the issue in a meeting this summer.

Most working chemists are not even aware of the controversy, says Jensen — but that is a shame, he adds. “They should be concerned about having a properly consistent periodic table.”