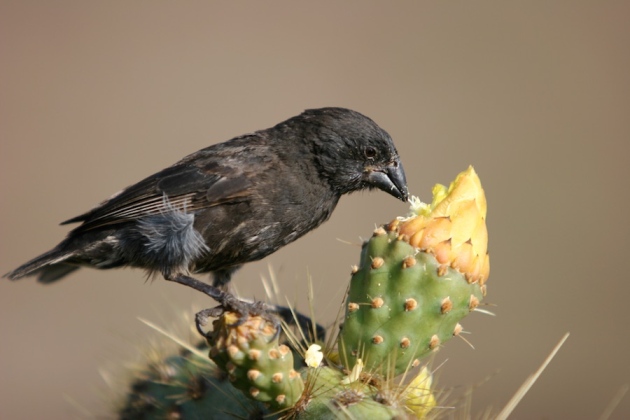 Researchers have identified genes influencing the beak size of finches such as Geospiza fortis.

Researchers are pinpointing the genes that lie behind the varied beaks of Darwin’s finches – the iconic birds whose facial variations have become a classic example of Charles Darwin's theory of natural selection.

Last year, researchers identified a gene that helps to determine the shape of the birds’ beaks1. Today in Science, they report a different gene that controls beak size2. Shifts in this gene underlay an evolutionary change that researchers watched in 2004–05, during a drought that ravaged the Galapagos Islands, where the finches live. The beak sizes of one population of finches shrank, so as to avoid competing for food sources with a different kind of finch – and their genetics changed accordingly.

“A big question was, ‘Is it possible to identify genes underlying such evolution in action, even in a natural population?’,” says Leif Andersson, a geneticist at Uppsala University in Sweden and one of the study’s authors. “We were able to nail down genes that have directly played a role in this evolutionary change.”

The story begins about two million years ago, when the common ancestor of all Darwin’s finches arrived on the Galapagos Islands. By the time of Charles Darwin’s visit in 1835, the birds had diversified into more than a dozen species, each adapted to different ecological niches. Some had massive beaks for cracking seeds, some had delicate beaks for snatching insects, and some even had sharp beaks for feeding on blood.

To examine the genetic basis for this variation, the researchers compared the genomes of 60 birds representing six species of Darwin’s finches, along with 120 specimens from other species to help them tease out phylogenetic relationships. As expected, closely related species had the most similar genomes.

But in those six finch species one region of the genome correlated more with bird size than with relatedness. Small species had one variation of this genomic region, large species had another and medium-sized species had a mixture of the two, suggesting that at least one of the genes in this region affected size. The most likely candidate was HMGA2, which is known to affect size and face structure in other animals. Further analysis showed that in Darwin’s finches, the HMGA2 region is especially important in controlling the size of the beak.

The researchers then looked at the role of HMGA2 in a dramatic evolutionary event. After drought struck the Galapagos in 2003, many of the medium ground finches (Geospiza fortis) with larger-than-average beaks starved to death. They couldn’t compete with a bigger species (Geospiza magnirostris) that had recently colonized the island and was better at eating large seeds. After the drought, the medium ground finches that managed to survive had smaller beaks than those that had perished, probably because they were better suited to eating the small seeds that their competitors avoided.

The discovery opens up new questions for biologists to explore, such as when gene variants arise and how they contribute to splits between species, says Dolph Schluter, an evolutionary biologist at the University of British Columbia in Vancouver, Canada.

“On the one hand it doesn't change anything, in that we already knew there was an evolutionary response to competition during that drought,” says Schluter. “But on the other hand, it changes everything, because we can point to a physical, material basis for that change.”

A previous version of this story incorrectly referred to the gene involved as HGMA2. It is, in fact, HMGA2.