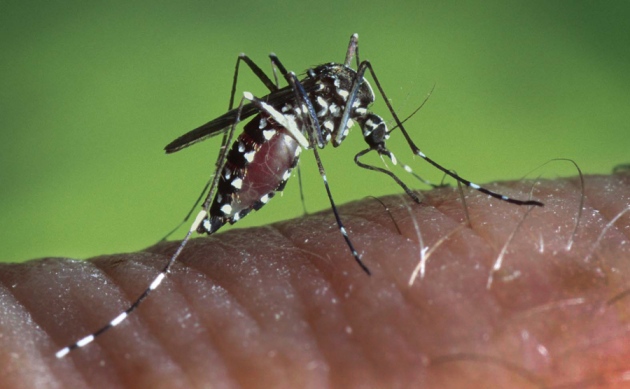 The buzz of tiny wings has been growing ever louder in Europe over the past decade, as invasive mosquitoes carrying exotic diseases such as chikungunya and dengue fever have taken up residence around the continent. Now Europe’s entomologists and public-health experts are joining forces to defend the region against the growing threat.

On 28 August, the European Centre for Disease Prevention and Control (ECDC) in Stockholm released guidelines that should help European countries to develop mosquito surveillance, which had become mostly unnecessary after malaria was largely eradicated from the continent in the mid-twentieth century. But the need for better vigilance has been growing again since the late 1990s, as the increased globalization of trade gives species such as the Asian tiger mosquito (Aedes albopictus) more opportunities to penetrate into Europe.

The surveillance data will feed into the three-year-old VBORNET consortium, a Europe-wide network of some 400 medical entomologists, microbiologists and public-health experts that is funded by the ECDC. The wealth of data they are assembling should help researchers to better understand how invasive mosquitoes are spreading and the risks they pose, and so to develop control strategies.

The latest guidelines provide an A–Z of mosquito surveillance, covering topics ranging from what sort of mosquito traps should be used in particular circumstances to resource management and policy-making advice. Francis Schaffner, head of integrated pest management at the consultancy Avia-GIS in Zoersel, Belgium, and one of the lead authors of the guidelines, hopes that they will encourage scientists, local authorities and governments to carry out more comprehensive surveillance. By recommending standardized surveillance reporting, the guidelines should also allow data generated by different researchers in different countries to be seamlessly combined into pan-European databases, he says.

A key target of surveillance is the Asian tiger mosquito, which can transmit at least 22 different viruses, including chikungunya and dengue. After it was reported in Albania in 1979, this native of southeast Asia spread to Italy in 1990 and has now expanded along the Mediterranean coast to nations such as France and Spain, as well as around the Black Sea (see ‘Multiplying mosquitoes’) (J. M. Medlock et al. Vector-Borne Zoonotic Dis. 12, 435–447; 2012). At least five other invasive mosquitoes capable of spreading diseases are also gaining ground in Europe, including Aedes aegypti, which can transmit dengue and other diseases. 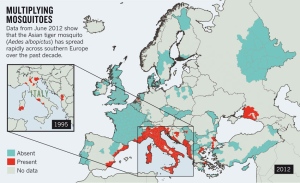 The international tyre business brings most of the unwanted arrivals. Mosquitoes can breed in small volumes of water, such as rainwater in tyres, and invasive forms have drought-resistant eggs that enable stowaways to survive long-distance transport before being revived by rain once they reach their destinations. The invaders can also hitch a ride on imported plants, such as lucky bamboo (Dracaena species). In the future, climate change could accelerate the spread of these sub-tropical and tropical species: predictive models suggest that invasive mosquitoes could find suitable habitats in northern Europe by 2030.

In 2007, Italy saw an outbreak of several hundred cases of chikungunya, which causes nausea, vomiting and debilitating joint pain. Dengue fever, which causes similar symptoms and can be fatal, hit a handful of people in France and Croatia in 2010. And there has been a steady rise in cases of West Nile virus, the fever that is currently notching up a record year for infections in the United States.

Surveillance remains patchy or non-existent in many of the most affected countries around Europe, including Portugal, Greece, Turkey and those bordering the Black Sea. Monitoring insects is expensive and time-consuming, and governments that are preoccupied with existing health challenges may be reluctant to put funds towards tracking potential future threats. But one underlying message of the report is that early surveillance is ultimately cheaper than dealing with an established pest, which can require widespread spraying with insecticides.

“The latest guidelines provide an A-Z of mosquito surveillance.”

In the Netherlands, for example, Asian tiger mosquitoes are introduced every year, but surveillance and control measures have so far prevented them from becoming established, says Marieta Braks, an entomologist at the National Institute for Public Health and the Environment in Bilthoven, and leader of VBORNET’s strategic consultation group. The Dutch authorities pay close attention to companies that import tyres from countries harbouring dangerous mosquitoes, and that stock tyres outdoors, where rain could allow mosquito eggs to hatch. In countries such as Italy, where the tiger mosquito is already widespread, surveillance is instead geared more towards keeping numbers under control.

VBORNET’s geographical information system allows scientists to combine surveillance data with environmental factors, including temperature and humidity, to better track the main invasive mosquito species. Models based on these combined data can reveal, for example, how environmental conditions can affect mosquitoes’ ability to transmit pathogens, and so provide information on the likelihood of outbreaks in various regions.

The maps may also perform a useful peer-pressure function, says Braks, by highlighting where researchers and authorities have failed to supply and share data. “What we hope is that no one will want to be a blank on the map.”