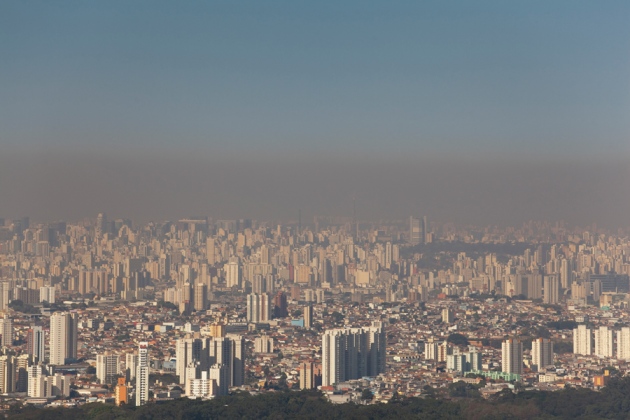 The smog In São Paulo, Brazil.

Running vehicles on ethanol rather than petrol can increase ground-level ozone pollution, according to a study of fuel use in São Paulo, Brazil.

Ozone (O3) is a major urban pollutant that can cause severe respiratory problems. It can form when sunlight triggers chemical reactions involving hydrocarbons and nitrogen oxides (NOx) emitted by vehicles.

Ethanol has been promoted as a ‘green’ fuel because its combustion tends to produce lower emissions of carbon dioxide, hydrocarbons and NOx than petrol. But the impact on air quality of a wholesale transition from petrol to ethanol has been difficult to assess, with different atmospheric chemistry models predicting a variety of consequences.

Alberto Salvo, an economist at the National University of Singapore, and Franz Geiger, a physical chemist at Northwestern University in Evanston, Illinois, have now answered the question with hard data. Their study, published today in Nature Geoscience1, unpacks what happened when the motorists of São Paulo — the largest city in the Southern Hemisphere — suddenly changed their fuel habits.

In 2011, about 40% of the city’s 6 million light vehicles — mostly cars — were able to burn pure ethanol or a petrol-ethanol blend, and both fuels were widely available. Consumers in São Paulo thus had more choice over their fuel than almost anywhere else in the world, says Salvo.

Between 2009 and 2011, the price of ethanol rose and fell in response to fluctuations in the global prices of sugar, which is used to produce ethanol via fermentation. But the government-controlled gasoline price remained steady. This led to a huge shift in fuel consumption — wholesalers’ figures suggest that gasoline’s share of total transport fuel rose from 42% to 68%. “Our study is the only one where you have a large switch over a relatively short timescale,” says Salvo.

São Paulo also has an extensive network of air-monitoring stations that record the atmospheric consequences of its notorious traffic congestion. Salvo and Geiger collated these air-quality measurements and used other data sets — detailing meteorological and traffic conditions, for example — to weed out other factors that would have affected air quality over that period. Overall, they report, the rise in gasoline consumption caused an average drop of 15 micrograms per cubic metre (15 μgm–3) in ground-level ozone concentration, down from a weekday average of 68 μgm–3.

But air-quality campaigners should not start advocating for petrol instead of ethanol quite yet. Increased petrol burning clearly raised levels of NOx, which also poses direct health concerns, and it probably boosted the amount of particulate matter in the air, something the study did not look at. And because every city has its own unique air chemistry, a similar fuel switch might produce very different results in London or Los Angeles. Nevertheless, says Salvo, the findings illustrate that “ethanol is not a panacea”.

So how could burning more petrol, which puts more of the ingredients for ozone formation into the air, actually reduce São Paulo’s ozone levels?

As nitrogen dioxide becomes more abundant in the air, it increasingly combines with hydroxyl radicals to form nitric acid. This removal of hydroxyl radicals shuts down the reaction that forms ozone. “It’s a really strong quenching effect,” says Sasha Madronich, an atmospheric chemist at the US National Center for Atmospheric Research in Boulder, Colorado, who wrote an accompanying News and Views article on the São Paulo study2. At high NOx levels, this quenching begins to outweigh ozone synthesis, and ozone levels drop.

Theoretical models have predicted that such an ‘NOx-inhibited’ situation could arise in cities with relatively high NOx levels, but “it’s never been observed, because there’s no place to observe it”, says Geiger.

The researchers say that their method of combining disparate data sets to tease out the effects of fuel changes could now be used in other cities. Geiger acknowledges that São Paulo is “the best-case scenario in terms of data availability”, but hopes to apply the same method to Chicago, Illinois, which might enable his team to predict the impact of a major shift to vehicles powered by electricity or natural gas, for example.

And by uncovering the real-world impact of fuel changes in São Paulo, the researchers have provided a useful test bed for air-pollution models, adds Madronich. “If a model cannot reproduce these results,” he says, “that’s a problem for the model.”