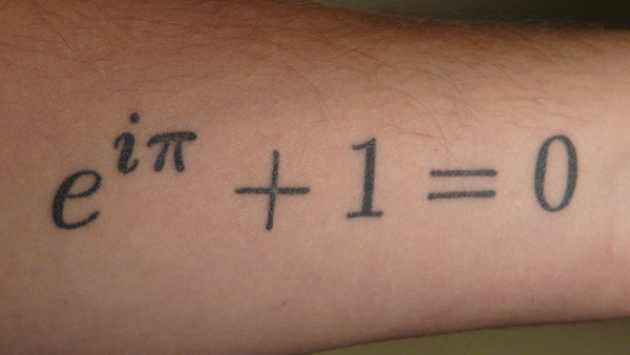 Euler's formula, linking the numbers i, π and e, is so revered that some mathematicians, such as Xander Henderson of the University of Nevada in Reno, have had it tattooed on their bodies.

When mathematicians describe equations as beautiful, they are not lying. Brain scans show that their minds respond to beautiful equations in the same way other people respond to great paintings or masterful music. The finding could bring neuroscientists closer to understanding the neural basis of beauty, a concept that is surprisingly hard to define.

In the study, researchers led by Semir Zeki of University College London asked 16 mathematicians to rate 60 equations on a scale ranging from "ugly" to "beautiful." Two weeks later, the mathematicians viewed the same equations and rated them again while lying inside a functional magnetic resonance imaging (fMRI) scanner. The scientists found that the more beautiful an equation was to the mathematician, the more activity his or her brain showed in an area called the A1 field of the medial orbitofrontal cortex.

The orbitofrontal cortex is associated with emotion, and this particular region of it has shown in previous tests to be correlated with emotional responses to visual and musical beauty. The researchers wondered whether the trend would extend to mathematical beauty, which "has a much deeper intellectual source than visual or musical beauty, which are more 'sensible' and perceptually based," they wrote in a paper reporting their results published on 13 February in Frontiers of Human Neuroscience.

Investigating mathematical beauty allowed the researchers to test the role of culture and learning in aesthetic appreciation. The scientists hypothesized that while people with no musical or artistic training can still appreciate Beethoven’s and Michelangelo's works, only those who understand the meaning behind certain mathematical formulas would find them beautiful.

To test this idea, the researchers also showed the equations to a control group of non-mathematicians, and found that their brains showed a lesser emotional response. "We had one person who saw nothing in these equations of any kind," Zeki says. However, the study showed that even without understanding all the equations, some of the lay participants found certain formulas beautiful anyway, perhaps because of their shape, symmetry and other aesthetic qualities, the scientists surmise.

Mathematicians say they are unsurprised by the findings. "When I see a beautiful mathematical construction, or an unexpected and wonderfully intricate argument with precise logical interlocking pieces in a proof, I do feel the same way as when I see some art that amazes me," says mathematician Colin Adams of Williams College in Williamstown, Massachusetts. Daina Taimina, a mathematician at Cornell University in Ithaca, New York, says beautiful math results "sound like a melody. For me equations are beautiful if they have elegant solution or lead to unexpected, surprising results."

Understanding just what beauty is, not to mention what makes a thing beautiful, is not easy. Beauty is not simply something pleasing that brings happiness. Sad things, after all, can be beautiful. "There is the experience of beauty in pain," Zeki says. Take Michelangelo's Pietà, a statue of the Virgin Mary holding the dead Jesus Christ in her arms. "It's not a joyful thing, but it's very beautiful."

Some scientists question whether beauty is too complicated to be captured in an fMRI scan. "The concept of beauty is a distraction to contemporary neuroscientific investigation," says neuroscientist Bevil Conway of Wellesley College in Wellesley, Massachusetts. "The glib use of this term in fMRI studies shows an ignorance of the vast history of philosophy on beauty that has left little doubt that the concept cannot be tucked neatly into a box." Conway says he is a fan of Zeki's work and that the study's findings are interesting. However, the interplay of reward, decision-making and emotional reaction that constitutes the brain's response to beauty makes the term too slippery an idea to pin down. "That there should be some common machinery for the complex interplay of mechanisms responsible for [appreciating beauty] is a valuable contribution, but it sheds little, if any, insight on what constitutes beauty."

Zeki and his colleagues admit that beauty is not perfectly defined, but say their studies could lead toward a deeper understanding of the idea. "The question we address is what neural mechanisms allow us to experience beauty," Zeki says. "The central issue that emerges from this work for the future is, why is it that an equation is beautiful?"

The study found, for example, that the beauty of equations is not entirely subjective. Most of the mathematicians agreed on which equations were beautiful and which were ugly, with Euler's identity, 1+eiπ=0, consistently rated the most attractive equation in the lot. "Here are these three fundamental numbers, e, π and i," Adams says, "all defined independently and all critically important in their own way, and suddenly you have this relationship between them encompassed in this equation that has a grand total of seven symbols in it? It is dumbfounding.

On the bottom of the heap, mathematicians consistently rated Srinivasa Ramanujan's infinite series for 1/π most ugly.