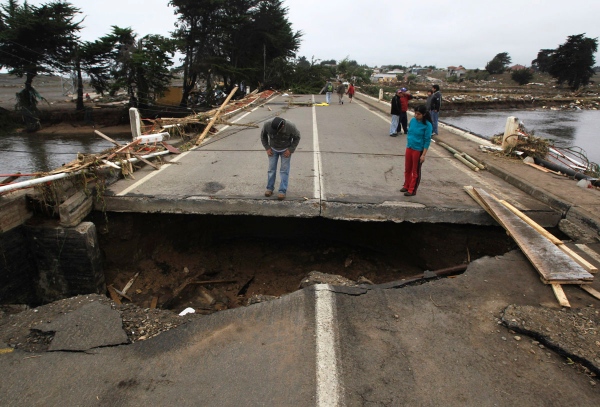 Large tremors, like the magnitude 8.8 earthquake that struck Pelluhue, Chile, in 2011, can spawn quakes at US well-injection sites.

Natural-gas extraction, geothermal-energy production and other activities that inject fluid underground have caused numerous earthquakes in the United States, scientists report today in a trio of papers in Science1–3.

Most of these quakes have been small, but some have exceeded magnitude 5.0. They include a magnitude-5.6 event that hit Oklahoma on 6 November 2011, damaging 14 homes and injuring two people, says William Ellsworth, a seismologist at the US Geological Survey in Menlo Park, California, and the author of one of the papers1.

He says that the annual number of earthquakes record at magnitude 3.0 or higher in the central and eastern United States has increased almost tenfold in the past decade — from an average of 21 per year between 1967 and 2000 to a maximum of 188 in 2011. A second study2, led by Nicholas van der Elst, a seismologist at Columbia University's Lamont-Doherty Earth Observatory in Palisades, New York, finds that at least half of the magnitude-4.5 or larger earthquakes that have struck the interior United States in the past decade have occurred near injection-well sites.

Ellsworth suspects that increased activity at natural-gas wells has altered stresses in earthquake-susceptible areas by increasing the fluid pore pressure in underground rock, lubricating pre-existing faults so they are more likely to rupture.

Previous research has linked hydraulic fracturing, or fracking, at such wells to nearby quakes. But Ellsworth says that the controversial technique — which uses high-pressure fluids to shatter rocks and release trapped natural gas — has never produced an earthquake larger than magnitude 3.6. He believes that it is not fracking itself, but the disposal of waste water from the process by reinjecting it into adjacent rock that has driven the increase in the number of bigger quakes.

Only a fraction of the more than 30,000 such disposal wells in the United States seems to be a problem. One way to work out which areas might be at risk, says van der Elst, is to watch what happens after large earthquakes — magnitude 8.0 and higher — around the world, such as those that have afflicted Japan, Chile and Sumatra in recent years.

Such events send waves rippling along the entire surface of the planet. At most well sites, these have little effect, but in a few cases they produce swarms of small tremors that are followed, months later, by larger, locally generated earthquakes. Van der Elst says that this type of seismic swarm might serve as a warning that an injection-well zone is on the verge of overloading its nearby faults, potentially producing a damaging earthquake.

It is not a foolproof method. Ivan Wong, a seismologist and vice-president of URS Corporation, a consulting firm in Oakland, California, says that van der Elst's study is groundbreaking. But in some cases, he notes, well activity has induced large earthquakes without any warning swarms. Stephen Horton, a seismologist at the University of Memphis, Tennessee, says that suggests that injection wells may spawn earthquakes in at least two different ways.

In another study published today3, earthquake physicist Emily Brodsky of the University of California, Santa Cruz, looked at the Salton Sea Geothermal Field, where water is injected into the southern end of California's San Andreas Fault, to be turned into steam by Earth's heat and used to drive electricity-generating turbines. Brodsky found that the rate at which water is lost during power generation is well correlated with earthquake incidence.

Ultimately, such site-specific data will prove crucial in guiding decisions by well operators and regulators seeking to limit seismic risk, she says. "Without that, we’re stuck with vague generalities.”