As plumes of pollution rise over the booming industrial towns of Asia, satellite data could help to alert people in other regions to the approach of drifting smog.

A team of researchers from the United States has conducted the first high-resolution analysis of ozone — the main constituent of smog — travelling from Asia to the western United States. The group's findings, published last month in the Journal of Geophysical Research1, indicate that the contribution of Asian emissions to intercontinental pollution is higher than was previously believed. 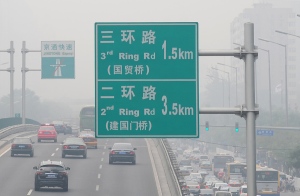 Smog that originates in China can make its way to the United States.

Scientists have been documenting the phenomenon of pollution crossing the Pacific Ocean since the 1990s. Most research so far has focused on how imported emissions affect average pollution levels, but the latest analysis goes further, says Meiyun Lin, an atmospheric chemist at Princeton University in New Jersey, who is the lead author of the study. “We show that Asian emissions directly contribute to ground-level pollution in the United States.”

Using chemical modelling, Lin and her colleagues distinguished between locally generated pollution and that arriving from thousands of miles away. They analysed air-quality data from satellites and ground measurements to track the passage of ozone from Asia’s churning factories to the western United States over the course of a few days in mid-2010.

They found that the majority of US ground pollution came from local sources, but as much as 20% was attributable to Asian emissions.

Kathy Law, a chemist at the LATMOS-CNRS atmospheric-science and astrophysics research institute in Paris, says the results show that controlling long-range pollution is an international issue.

Under the current US Environmental Protection Agency (EPA) National Ambient Air Quality Standards, ozone should not exceed 75 parts per billion of the atmosphere. Lin and her colleagues found that on days when ozone levels in US cities were higher than the maximum, Asian emissions pushed them over the top more than half the time.

Terry Keating, an air-quality scientist at the EPA Office of Air and Radiation in Washington DC, says that although the study contributes to efforts to understand how global emissions affect regional pollution, further investigation is needed to quantify the impact. He adds, however, that satellite data could be useful for forecasting spikes in pollution.

The findings carry significant implications not only for regulating local emissions, but also for negotiating international standards. Although ozone emissions have been falling in the United States and Europe, they have been on the rise in Asia, and especially in China.

Alongside the Asia's rapid economic growth, expanding indutry contributes to a measurbale increase in ozone pollution in the US at a rate of 0.8–1% each year, says Daniel Jaffe, a chemist at the University of Washington Bothell. “That’s not a trivial amount.”

Although the US government is working with China to help to improve air quality, negotiating international emissions standards is a challenging and often volatile issue.

However, Jaffe suggests that it is in this context — rife with political tension — that forecasting might prove most useful. Even if governments don’t act immediately to lower ozone standards, an early-warning system could still protect the people who are most susceptible to health risks related to air quality.