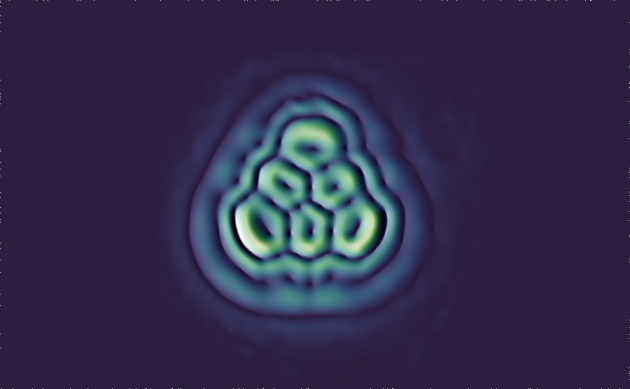 A 3D simulation of triangulene, based on a scanning-probe-microscope image of the molecule on a copper surface.

Researchers at IBM have created an elusive molecule by knocking around atoms using a needle-like microscope tip. The flat, triangular fragment of a mesh of carbon atoms, called triangulene1, is too unstable to be made by conventional chemical synthesis, and could find use in electronics.

This isn't the first time that atomic manipulation has been used to create unstable molecules that couldn’t be made conventionally — but this one is especially desirable. “Triangulene is the first molecule that we’ve made that chemists have tried hard, and failed, to make already,” says Leo Gross, who led the IBM team at the firm’s laboratories in Zurich, Switzerland.

The creation of triangulene demonstrates a new type of chemical synthesis, says Philip Moriarty, a nanoscientist who specializes in molecular manipulation at the University of Nottingham, UK. In conventional synthesis, chemists react molecules together to build up larger structures. Here, by contrast, atoms on individual molecules were physically manipulated using a microscope.

But making molecules one at a time will be useful only in particular situations. And the method is unlikely to work for those with complicated shapes or structures that make it hard to identify or target individual atoms.

Triangulene is similar to a fragment of graphene, the atom-thick material in which carbon atoms are joined in a hexagonal mesh. The new molecule is made up of six hexagons of carbon joined along their edges to form a triangle, with hydrogen atoms around the sides (see ‘Radical triangle’). Two of the outer carbon atoms contain unpaired electrons that can’t pair up to make a stable bond.

Such a molecule is highly unstable because the unpaired electrons tend to react with anything around them. “As soon as you synthesize it, it will oxidize,” says Niko Pavliček, a member of the IBM team. So far, the closest conventional synthesis has come to making molecules of this sort involves buffering the reactive edges with bulky hydrocarbon appendages2.

The IBM team turned to a scanning probe microscope, which has a needle-sharp tip that ‘feels’ a material’s shape. The technique is usually used to image molecules, by measuring attractive forces between the tip and sample, or the electric currents that pass between them. The IBM team has demonstrated3 that, if the tip has a small molecule such as carbon monoxide attached to it, force microscopy can provide images of such high resolution that they resemble the ball-and-stick diagrams of chemistry textbooks.

Gross’s team has already shown how the microscope can be used to direct the course of chemical reactions and make unstable 'intermediate' molecules4. To produce triangulene, the team began with a precursor molecule called dihydrotriangulene, which lacks the reactive unpaired electrons. The precursors were synthesized by chemists at the University of Warwick in Coventry, UK.

The researchers deposited these molecules on a surface — salt, solid xenon and copper are all suitable — and inspected them under the microscope. They then used two successive voltage pulses from the tip, carefully positioned above the molecules, to blast off two hydrogen atoms and create the unpaired electrons. The work is published in Nature Nanotechnology1.

The team then imaged the products with the microscope, first picking up a carbon monoxide molecule to acquire the high resolution. The images had the shape and symmetry predicted for triangulene. Under the high-vacuum, low-temperature conditions of the experiments, the molecules remained stable for as long as the researchers looked. 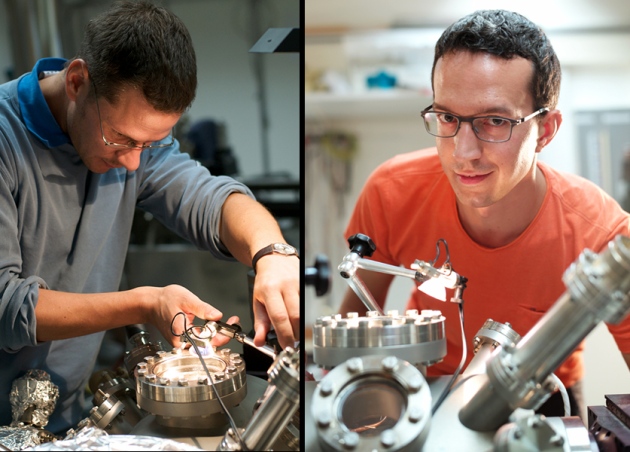 “To my knowledge, this is the first synthesis of unsubstituted triangulene,” says chemist Takeji Takui of Osaka City University in Japan, who has previously synthesized triangulene-type molecules2.

Moriarty calls the work elegant, but is surprised that triangulene remained stable on a copper surface, where he might have expected it to react with the metal. In one set of experiments, says Pavliček, the molecule was still sitting on the copper four days after the team made it.

The researchers also probed triangulene’s magnetic properties. They found that, as they had expected, the two unpaired electrons have aligned spins — the quantum-mechanical property that gives electrons a magnetic orientation.

Graphene: The quest for supercarbon

This property could make triangulene useful in electronics, they say. Takui agrees, and foresees applications in quantum computing, quantum information processing and a field known as spintronics, in which devices manipulate electron spins to encode and process information.

Making molecules one at a time might not seem very promising, but Gross points out that current quantum computers, such as the Quantum Experience developed at IBM, use only a handful of quantum bits, or qubits, each of which could correspond to a single molecule. Even if you need to make 100 such molecules “by hand”, he says, “it would be worth going through that manual labour”.

And although it’s not clear how easily the approach could be applied to molecules that aren’t flat, Gross says that such atom manipulation can be performed for 3D molecules to some extent.

Even with triangulene and related graphene-like fragments, “there’s a lot of exciting science still to be done”, says Moriarty. The IBM team “continues to set a high bar for the rest of us”, he adds.