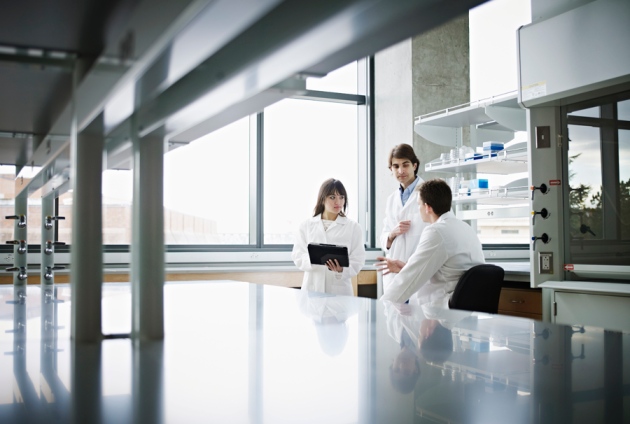 In biology-related fields, research groups run by male academics — especially eminent ones such as Nobel laureates — tend to have fewer female staff than average.

Leading male researchers in the life sciences employ fewer women than do their female peers, according to a study of US laboratories. The effect is particularly pronounced in labs run by ‘elite’ male principal investigators, who train significantly fewer women than do other male professors, the authors have found. Their study appears in this week's Proceedings of the National Academy of Sciences1.

Because a disproportionate number of assistant professors are appointed from such elite labs, the authors suggest that the skew could help to explain why women account for just 18% of full professors in the biological sciences, despite making up more than half of PhD graduates in the field.

Running a lab with a staff that is more than half male does not necessarily make someone sexist, says Jason Sheltzer, a cancer biologist at the Massachusetts Institute of Technology in Cambridge, and a co-author of the study. “We do think that maybe this shows the need for elite faculty members to make a stronger, more proactive effort to reach out to talented women.”

Sheltzer and his co-author Joan Smith, a software engineer at Twitter, also in Cambridge, looked at publicly available data on more than 9,000 graduate students and postdoctoral fellows in 39 departments at 24 top US research institutions.

The more decorated the professor, the greater the skew. In groups run by elite male faculty — those who are members of the US National Academy of Science (NAS) or who receive funding from the Howard Hughes Medical Institute (HHMI) — the proportion of female postdocs drops to 31%. The largest gender gap is in the labs of the 22 male Nobel prizewinners included in the study, where male postdocs outnumber women three to one. 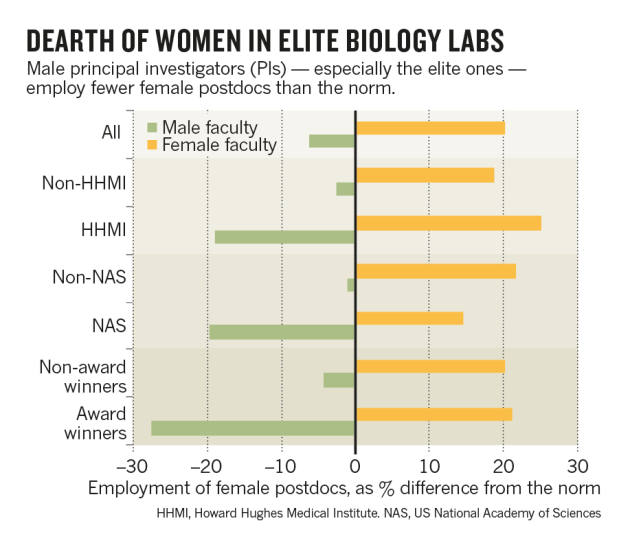 Women professors show no such bias, the study found. Female HHMI investigators and NAS members employ roughly the same proportion of women as do other female faculty, and winners of Nobel prizes or major research awards seem to train slightly more female graduate students than their less-decorated colleagues.

A further finding hints at the potential impact of such bias. Appointees to assistant-professor positions, which are highly coveted, were predominantly drawn from postdocs trained in elite labs. As around four out of five elite principal investigators are male, the skewed gender ratios in these ‘feeder’ labs leaves fewer women in the competitive pool for faculty positions. “These elite labs appeared to be serving as a gateway to the professoriate. This underscores how important the issue is,” says Sheltzer.

Many factors could be behind the skew, say the authors, although they note that differences in faculty age, rank, lab size or discipline do not explain the results.

One possible reason is unconscious or implicit bias on the part of principal investigators. In simulated hiring situations, both men and women faculty have been found to show bias in favour of males when reviewing applicants for a laboratory-manager position2 and in how often they respond to requests to meet with prospective students. In both setups, the fictitious ‘applicants’ were indistinguishable apart from their names.

Why female investigators seemed in the latest study not to favour male trainees is unclear, says Sheltzer. Curt Rice, vice-president of research and development at the University of Tromsø in Norway, who studies gender equality and is head of the Norwegian Committee on Gender Balance in Research, says that the results might reflect factors missed in simulated studies. Women professors might, for example, be more likely to mentor their junior colleagues, leading more young women to apply to female-led labs, he suggests.

Indeed, self-selection away from elite labs by female academics is another potential reason behind the skew, say the authors, pointing to studies finding that women often underestimate their skill level3 and are less likely than men to expect their spouses to make career sacrifices on their behalf4. For Rice, rather than a real choice, much of this apparent self-selection is down to female trainees acting on the messages they receive. “Maybe these women have gone through the PhD process, experienced the effects of implicit bias, realised they’re held out of various important networks and that there are few women among their role models, and they take the consequences of that," he says.

The authors dismiss the notion that any gap in applicant quality could be behind the gender gap in elite labs -- something that might seem obvious, but is important to stress as the question is still asked, says Rice. The paper highlights that not only do elite women PIs employ as many female trainees as other female professors, but at graduate level women and men win equal numbers of competitive fellowships from agencies such as the US National Science Foundation. “Once again, this study shows that quality alone is not the sole criterion for hiring people,” says Rice.

The underrepresentation of women in science slows the progress of discovery by artificially excluding people who have the ability to make significant contributions, adds Sheltzer. “There may be more of a need for male principal investigators to reach out and collaborate with these talented women, at talks, conferences and interviews, and bring them in to work in their lab.”