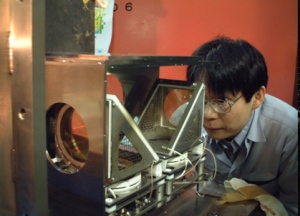 Is it in there? Researchers at RIKEN in Japan claim conclusive proof that they have created element 113.

After nine years of painstaking experiment, researchers in Japan reported yesterday1 that they have created a third atom of the element 113. That success, according to experts in the field, could see the element officially added to the periodic table. It would be the first artificial element to be discovered in East Asia, potentially giving the Japanese team the right to name it.

But that privilege is not assured. US and Russian researchers have also been hard at work on element 113, and say that they have created 56 atoms of it since 2003.

None of these sightings has been confirmed by the independent committee of experts appointed to rule on such matters. That shows how hard it is to prove the creation of new superheavy elements, although it also highlights the bureaucratic nature of the process set up to approve findings.

Since 2003, the Japanese team, led by Kosuke Morita, has been bombarding a bismuth target with a beam of zinc atoms at RIKEN’s Nishina Center for Accelerator-based Science in Saitama, near Tokyo. Their goal was to fuse the atomic nuclei of these elements to produce an atom with 113 protons and 165 neutrons in its nucleus.

This fusion is extremely unlikely. Over nine years, the beam has been switched on for a total of 553 days, during which time 130 quintillion (1.3 × 1020) atoms of zinc have been fired at the bismuth target. Indeed, says Morita, the team knew that success would be unlikely from the start: they calculated that they would see only 3–6 successes in every 100 quintillion attempts.

The team had their hopes up early. By 2004, they had spotted what seemed to be an atom of element 113 (ref. 2). But successful fusions cannot be observed directly. Jamming that many protons and neutrons together creates an unstable tumult of forces, and the atom falls apart within a few milliseconds. It decays, either splitting into two smaller portions (‘fission’) or spitting out a series of small, charged particles ('α-decay') that are detected when they embed themselves in a surrounding silicon semiconductor. The timings and energies of these decay products hint at what the original material was, but they provide certainty only if the final decay product is one whose properties are already known.

In the first two of RIKEN's possible observations of the element, researchers recorded four α-decays followed by a fission reaction, which they assumed came from an isotope of dubnium (element 105). But it wasn’t clear that the chain of α-decays began with element 113. That, at least, was the conclusion of last year’s technical report3 from the body that pronounces on such matters, a group of experts drawn from the International Union of Pure and Applied Chemistry (IUPAC) and the International Union of Pure and Applied Physics (IUPAP).

Nor were the technical experts satisfied with separate observations reported in 2004 by a team of scientists at the Lawrence Livermore National Laboratory in California and the Joint Institute for Nuclear Research in Dubna, Russia4. That team used a different reaction, slamming calcium into a target of americium (element 95) to create element 115. When this element fell apart, decaying to a stable dubnium end product, it was thought to produce element 113 along the way.

The Dubna experiments — which would have created different, more stable, isotopes of 113 — had the advantage that their reaction, in theory, worked 300–500 times as often as the Japanese experiment, says Yuri Oganessian, who works at the Dubna facility. On the other hand, each of the isotopes in the decay chain was new and had never been studied before. The team would have to study the chemical properties of the final atom in the chain to prove that it was dubnium, and therefore that element 113 had existed fleetingly inside their experiment, in order to satisfy IUPAC and IUPAP.

“I’d say this fulfils all IUPAC’s requirements, and I’d be happy to give it to them.”

As a result, there are blanks on the periodic table where elements 115 and 113 would be — even though elements 112, 114 and 116 have been officially approved.

The latest RIKEN results seem to answer all critics, because their atom of 113 decayed by spitting out a chain of six α-particles, in well-known and previously observed reactions1. “I’d say this fulfils all IUPAC’s requirements, and I’d be happy to give it to them,” says Rolf-Dietmar Herzberg, a nuclear physicist at the University of Liverpool, UK, who studies super-heavy elements.

Other researchers contacted by Nature were more equivocal. In January this year, the Dubna team reported work done between November 2010 and March 2011, including chemical analyses of the dubnium end product5.

Ultimately, naming rights will depend on the committee’s decision. Paul Karol, a chemist at Carnegie Mellon University in Pittsburgh, Pennsylvania, who was on the technical committee that turned down 113 and 115 last year, says that the panel will now consider both groups’ claims. No one should get their hopes up for a speedy resolution: last year’s report took three years from experiments to decision. But Karol says that was an exceptional delay and this review will be faster.

In a 2004 newsletter that RIKEN published shortly after the team’s first claimed observation, the names ‘rikenium’ and ‘japonium’ were suggested for element 113 (temporarily called ununtrium). According to the IUPAC, elements cannot be named after an institute, so ‘japonium’ would seem to be the front-runner.

Meanwhile, Morita says that the Japanese experiment shuts down on 1 October, and the researchers will be moving on to the next undetected elements — numbers 119 and 120. Once again, the chase is on: a team at the GSI Helmholtz Centre for Heavy Ion Research in Darmstadt, Germany, has spent the past five months searching for element 119, with a calculated “80–90% chance of success”, according to the project’s director Christoph Düllman.