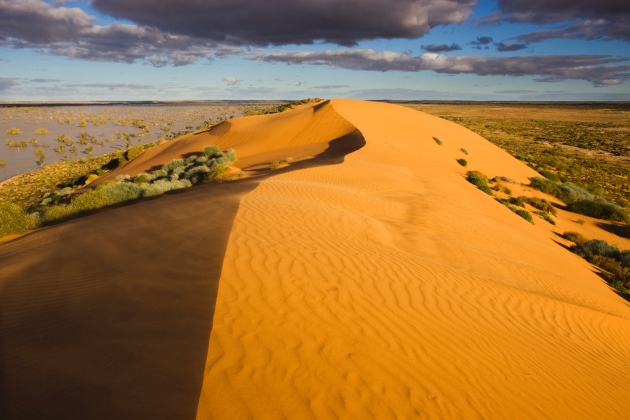 Every year since 1990, ecologist Glenda Wardle of the University of Sydney has ventured to the same expanse of desert in central Australia to take stock of its flora and fauna. But this year may be the last time Wardle can collect data from the 8,000-square-kilometre site in the Simpson Desert. The consortium that operates her research area and 11 other long-term sites, comprising more than 1,100 individual field plots, will stop funding this network by the end of the year because of budget cuts and shifting priorities, say its leaders.

Without this money, which covers a large portion of the operating costs at these sites, 6 of the 12 will probably close, says ecologist David Lindenmayer, who is the science director of the network and is based at the Australian National University in Canberra. This would break time-series data that scientists have collected over decades, he says.

“It’s a foolish decision given the environmental effects that are occurring throughout the world, and especially in Australia,” says Gene Likens, an ecologist at the Cary Institute of Ecosystem Studies in Millbrook, New York. Without the information collected at these long-term sites, he says, it will be impossible to know how to manage these landscapes effectively under climate change.

Other researchers, however, concede that tight budgets mean that not all facilities can be funded.

As Australia plans to cut its ecosystem-surveillance network, other countries are expanding theirs. The US National Science Foundation, for example, announced in March that it would expand its own network of 25 long-term ecological research (LTER) sites by adding 3 new ones. “Terminating Australia’s LTER network is totally out of step with international trends and national imperatives,” wrote Lindenmayer and 68 authors in a letter published in Science1 on 11 August. They say urgent and direct investment by the Australian government is crucial.

The cuts in Australia follow years of piecemeal support for ecological research infrastructure. Only five years ago, the government tasked a consortium known as the Terrestrial Ecosystem Research Network (TERN) with bringing together the country’s existing LTER sites. The dozen sites in the resulting Long Term Ecological Research Network (LTERN) cover deserts, rainforest, savannahs and alpine regions and collect data to answer questions specific to each ecosystem. The oldest field locations have been running continuously for 73 years.

In June, TERN director Beryl Morris and chair of the advisory board Lyn Beazley sent a letter to LTERN’s executive director, Emma Burns, stating that the network would not be funded beyond 2017. “I was completely blindsided,” says Burns, an ecologist at the Australian National University.

Burns says the reason given for cutting LTERN's funding, along with support for a complementary ecosystem-modelling facility known as eMAST, was so that TERN could meet the needs of the government’s planned environmental prediction system while staying within its budget, which is Aus$6 million (US$4.7 million) for 2016–17, a decrease of more than 50% since 2010–11. The government did not respond to questions from Nature about the future of LTERN.

Morris, who is based at the University of Queensland in Brisbane, where TERN is administered, says that TERN is funded as research infrastructure and must now develop an environmental prediction system open to all researchers. To do that, she says, it must collect data on a “continental scale that is generalized, not bespoke, so you can predict from it”.

But Burns says the local and international scientific communities do not agree that TERN can deliver an environmental prediction system without LTERN. Time-series data and modelling are essential to a prediction system, says Wardle.

Michael Mirtl, who chairs the International LTER Network and is based at the Helmholtz Centre for Environmental Research in Leipzig, Germany, says the network’s closure will be a loss for groups in other countries that looked to Australia for guidance on how to integrate an LTER network and other surveillance systems with data processing and modelling systems. “I think many people in Australia making decisions were simply not aware of how excellent the Australian achievement was in the field,” says Mirtl.

Plans to withdraw funding from LTERN resurrect an ongoing debate in ecology about whether it is better to invest limited resources for environmental forecasting in broad-scale surveillance — generating lots of data by taking the same measurements in the same way at sites across the landscape — or in targeted ecological monitoring, which looks for drivers of change in specific ecosystems.

Likens says that standardized surveillance and “instruments are useful”, but he and others, such as Lindenmayer, believe that monitoring should be driven by researchers asking questions that answer problems. In the tropics of northern Queensland, for example, cyclones are the main driver of environmental change, whereas in parts of inland Australia, cattle grazing is the biggest factor. “That means you can’t just measure the same things in different environments,” says Lindenmayer.

Ecologist Ben Sparrow of the University of Adelaide and environmental chemist Mike Liddell of James Cook University in Cairns, both of whom direct other TERN facilities, say TERN doesn’t have the money to keep all its facilities running. Sparrow says that arguing over the merits of broad-scale surveillance and targeted monitoring is not constructive: both systems are necessary for understanding the environment, as is remote sensing using satellites. “The fundamental point is the lack of resourcing from the government,” says Sparrow.