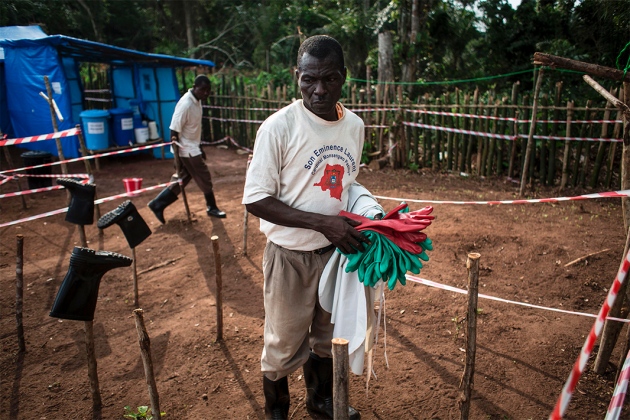 A health worker at an Ebola quarantine unit in Muma, a village in the Democratic Republic of the Congo, on 11 June.

Epidemiologist Anne Rimoin boarded a flight to Kinshasa on 19 May with a precious cargo in her luggage: the components of a diagnostic test for Ebola.

Rimoin hoped that the test, the GeneXpert Ebola Assay, would help officials to track cases in the latest Ebola outbreak, which was declared in the Democratic Republic of the Congo (DRC) on 11 May. The test was developed during the disastrous 2014 Ebola epidemic in West Africa.

The existence of the Ebola assay is a sign that the world’s ability to respond to outbreaks of the virus has improved. But the test was not available where it was needed when Ebola erupted in the DRC, says Rimoin, of the University of California, Los Angeles, who has worked with the Congolese Ministry of Health for 15 years. “The fact that I had to go out there with diagnostics in my briefcase is an example of the fact that we’re not fully prepared on that score,” she says.

On 2 July, the Congolese government and the World Health Organization (WHO) declared an end to the DRC outbreak — but public-health officials caution that its low death toll doesn’t prove that the world has learnt all the lessons of the West African crisis. They credit the fact that only four people died to the expertise of Congolese officials, who had dealt with seven previous Ebola outbreaks, and to the remoteness of the northern Bas Uele province where the outbreak occurred.

“The response was good, but it would not be valid to say that this shows that we’re ready for a larger response in a bigger context — that remains to be seen,” says Daniel Bausch, director of the UK Public Health Rapid Support Team, an agency created to fill some of the gaps exposed by the 2014 crisis.

International agencies sent personnel and equipment in response to the most recent outbreak much faster than they did in 2014, when months of delays allowed the West African epidemic to spiral out of control and eventually claim more than 11,000 lives. That failure led to calls for drastic improvements in the world’s public-health safety net, some of which have been heeded.

The WHO, which was widely criticized for responding too slowly to the 2014 outbreak, has created a Health Emergencies Programme in response. The WHO deployed 50 people to the DRC starting three days after the most recent outbreak was declared.

But other parts of the response came too slowly. Although an experimental Ebola vaccine was shown to be effective against the disease in the 2014 outbreak, its use in the DRC wasn’t approved until 29 May. The vaccine was ultimately never shipped to the country because no new cases emerged after that date.

The latest outbreak apparently began in April, when a 39-year-old man began vomiting and bleeding after handling the carcass of a dead wild boar in a forest in Likati. The man died while en route to a hospital; within days, two people who had helped to transport him fell ill themselves, as did their contacts.

Health workers shipped blood samples from contacts of these three people to a lab at the National Institute for Biomedical Research in Kinshasa, which found two cases positive for Ebola; a total of five people ultimately tested positive. Samples were also shipped to the International Centre for Medical Research in Franceville, Gabon, which analysed the viral genetic sequences of one of the samples.

The lab found that the Ebola strain that caused the Congolese outbreak is similar to one first seen in 1995 in Kikwit, DRC, a few thousand kilometres southwest of Likati, says Jean-Jacques Muyembe-Tamfum, director of the National Institute for Biomedical Research.

By contrast, when the 2014 Ebola outbreak began with a suspected case in Guinea, there were no labs in the country that could test for the virus. So public-health officials had to ship viral samples out of Africa for sequencing.

But the most crucial difference between the two outbreaks may have been the level of community engagement with efforts to halt Ebola’s spread. Muyembe-Tamfum was on the team that investigated the 1995 Kikwit outbreak, as well as on the team that worked on the very first Ebola outbreak in Yambuku, DRC, in 1976. The people of his country are no strangers to Ebola — whereas in West Africa, communities hid from and even killed officials seeking to track the disease in Sierra Leone, Guinea and Liberia.

“We are lucky because our population will collaborate with medical teams,” Muyembe-Tamfum says. “In the West African epidemic, community engagement came too late.”

Updated to reflect that the World Health Organization has declared the end of the DRC Ebola outbreak.