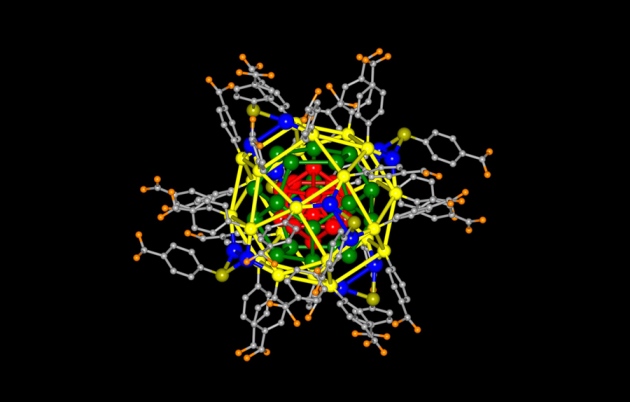 Researchers created silver nanoparticles that are chemically stable owing to a robust core of 32 silver atoms (red and green) that together behave as a single atom of a noble gas.

In the realm of nanoparticles, gold reigns supreme. Stable and easy to handle, gold nanoparticles have been used to image cells, deliver drugs and detect disease biomarkers. Silver, by contrast, has suffered from a tarnished reputation, because it is more easily oxidized than gold. It is cheaper, but its nanoparticles degrade far too easily for most uses.

Two teams of chemists are now burnishing silver’s status. They have independently developed methods to make robust silver nanoparticles on a large scale — and have worked out what makes them stable. “It bodes very well for manufacture,” says Terry Bigioni, a chemist at the University of Toledo in Ohio, who led one of the groups and hopes to use the nanoparticles to build more efficient solar cells.

The core of each nanoparticle behaves like a single ‘superatom’, with electrons orbiting it in a configuration simlar to that seen in the noble gas krypton. This makes the silver atoms there extremely resistant to chemical attack.

Bigioni’s nanoparticles each contain 44 atoms of silver, arranged in a highly symmetrical pattern. The heart of each particle is a hollow icosahedron of 12 silver atoms, surrounded by a dodecahedron of a further 20 atoms to produce a compact and extremely stable structure. The remaining 12 silver atoms are bonded to sulphur-containing molecules to form a protective cage around the core (see image above).

Each particle is less than 3 nanometres wide, a scale where the silver has very different optical and chemical properties to the bulk metal.

Bigioni’s recipe mixes one of the cheapest silver salts — silver nitrate — with other inexpensive reagents in water and ethanol. The simple, reliable method gives yields higher than 95%, and can produce up to 140 grams of silver nanoparticles in a single batch — hundreds of times more than routes to other nanoparticles. “It’s very different from any other nanoparticle synthesis I’ve ever encountered,” says Bigioni. “This is something a high-school student could do.” The procedure is described this week in Nature1.

Meanwhile, a team led by Nanfeng Zheng, a chemist at Xiamen University in China, unveils other 44-silver-atom nanoparticles in Nature Communications2. The researchers used an alternative recipe and slightly different sulphur-bearing molecules to create the protective shell, but otherwise the products “are really similar”, says Francesco Stellacci, a nanomaterials scientist at the Swiss Federal Institute of Technology in Lausanne. “They arrived at the same results independently, in friendly competition. It’s impressive.”

Last year, Stellacci reported his own synthesis of one of the silver nanoparticles subsequently prepared by Zheng3, but he and his colleagues were still working on the method and had not yet nailed down a structure.

Zheng’s group also made silver clusters containing a central icosahedron of 12 gold atoms. “Our tests demonstrated that the mixed silver–gold particles are far more stable than the pure silver particles,” he says. Together, the two papers offer “the first crystal structures of a silver nanoparticle”, says Bigioni.

Bigioni and Zheng found that the particles have a unique arrangement of electrons that makes them supremely stable. A lone silver atom bears an unpaired electron that is easily removed in oxidation reactions. But in the nanoparticles, most of these electrons are tied up in bonds with the sulphur atoms — and the remaining 18 are all safely locked away in the core.

The 32 silver atoms there share a set of energy levels that are neatly filled by the electrons. Since this pattern matches the outer layers of electrons in unreactive krypton, the metal atoms behave like a superatom of the noble gas, and their electrons would have to make a huge energy leap to become involved in a chemical reaction.

Conventional methods for making nanoparticles often produce a wide range of sizes, with quality varying from batch to batch. But Bigioni and Zheng's procedures made only particles with 44 metal atoms, no more or less. Not only does this make it easy to purify the particles, says Bigioni, but it would also make the properties and quality of the particles much more predictable, easing the path to regulatory approval for any biomedical uses of the particles, such as delivering antibiotic silver atoms to a microbe.

Furthermore, the silver clusters can absorb about ten times as much light as the ruthenium dyes used in dye-sensitized solar cells, and Bigioni is already discussing the commercial opportunities with a solar-cell company. “These particles are very good at absorbing light,” he says. “That’s a major advantage of silver over gold.”