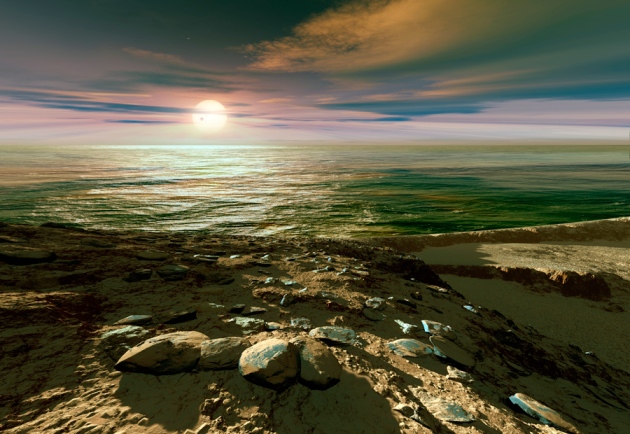 Habitable Earth-like exoplanets may be rarer than has been recently suggested.

If our planet were just a little closer to the Sun, a runaway greenhouse effect would render it unliveable, a climate model suggests. The simulation, which helps to define the inner edge of a star system’s 'habitable zone', drastically reduces the fraction of Sun-like stars that might harbour a rocky planet suitable for life, according to some scientists. But others note that the model, although detailed, might be too restrictive because it applies only to Earth-like planets on which water is abundant.

As far as is known, life depends on liquid water — which Earth has lots of. But if the planet were to receive about one-tenth more solar radiation than it does now, that blessing would become a curse: water vapour traps heat just like atmospheric carbon dioxide, and on a warmer world more water would evaporate, boosting the greenhouse effect and thus trapping even more heat. That destabilizing feedback, or runaway greenhouse effect, would eventually rob the planet of its oceans, says Jérémy Leconte, a planetary scientist at the Pierre Simon Laplace Institute in Paris.

Previous models used to estimate the radiation levels at which a planet’s runaway greenhouse effect kicks in — or when the atmosphere’s water vapour is broken apart and lost to space — do not do such a good job, says Leconte. That is because those models are one-dimensional, meaning that they assume that all variables involved are uniform in horizontal directions and consider only how those variables change as a function of altitude.

Many of the nuances of atmospheric circulation that help to stabilize climate, as well as the potential cooling effect of clouds, are sacrificed for the sake of simplicity in such models. In this week’s Nature, by contrast, Leconte and his colleagues describe1 a more detailed, three-dimensional simulation of hot, extremely moist planetary atmospheres. Adding three-dimensionality “made this a fine study that’s way ahead of the game”, says James Kasting, a planetary scientist at Pennsylvania State University in University Park.

Whereas previous models showed increased warming creating a predominance of low-altitude clouds — which on balance tend to cool the planet’s surface — Leconte and his colleagues found that in their model, cloud formation shifts towards high altitudes as the planet warms. The cirrus clouds formed tend to trap heat, which leads to more evaporation and an accelerated greenhouse effect.

This vicious cycle is moderated by the large-scale circulation of the atmosphere, which creates cloud-free areas in mid-latitude regions that lets surface heat there radiate back into space. Taking all these factors into account, the model suggests that the inner edge of the Solar System’s habitable zone is about 142 million kilometres from the Sun, or about 95% of Earth’s average orbital distance.

The results “actually extend the inner edge of the habitable zone toward the Sun”, says Leconte, compared to an earlier estimate2 that put the 'red line' for the runaway effect at just 99% of Earth's average orbital distance.

But other papers have used much more optimistic estimates of the habitable zone. In one study published earlier this year3, Andrew Howard, an astronomer at the University of Hawaii at Manoa in Honolulu, and his co-authors said that planets could host life even if they were 50% closer to their stars than Earth is from the Sun. Using that inner boundary of the habitable zone, they calculated that perhaps 22% of Sun-like stars in the Milky Way could be orbited by life-friendly planets.

That 22% estimate probably needs to be cut in half, Kasting and a co-author write in a News & Views4 that accompanies Leconte's paper. But the latest study is limited to assessing Earth-like planets with an abundance of water, says Howard, whereas his team considered a variety of planets, including those that may sport only a limited amount of water. For such a planet, he suggests, a runaway greenhouse effect driven by water vapour may not be a substantial threat.