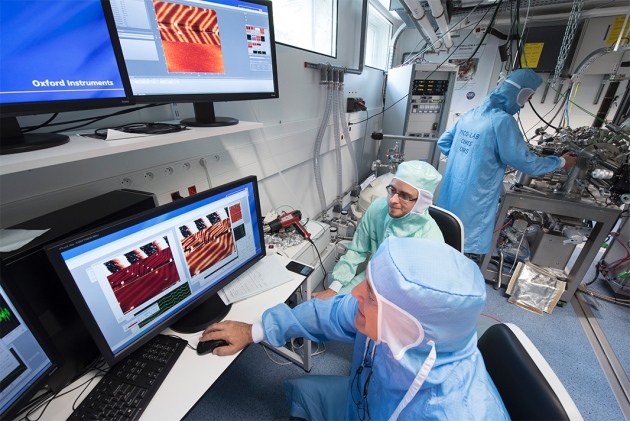 Molecules as seen through a scanning tunnelling microscope at the Centre for Materials Elaboration and Structural Studies in Toulouse. The same instrument will be used to drive molecules in the world’s first nanocar race.

Six teams from three continents are preparing for a unique race on a polished gold track in the south of France this month. But this is no luxurious supercar event: competitors will be racing single molecules. In 36 hours, they aim to move them a distance of 100 nanometres — about one-thousandth the width of a human hair — on a laboratory track held in a vacuum and chilled to a few degrees above absolute zero.

The contest is being billed as the world’s first nanocar race, and the aim is to get people excited about nanotechnology and molecular machines, says co-organizer Christian Joachim, a chemist who works at the Centre for Materials Elaboration and Structural Studies in Toulouse, where the event will take place. He and Gwénaël Rapenne, a chemist at the University of Toulouse-Paul Sabatier, developed the contest after Joachim realized — following an interview with a journalist — that nanocars attracted much more public attention than did his research on fundamental aspects of nanotechnology.

The ‘Windmill’ nanocar travels over a surface: filmed during training at Dresden.

The race may also provide scientific insights for the contestants, who want to learn more about how their individual molecules interact with surfaces. That may help in the design of catalysts and, in the longer term, further the aim of creating molecular-scale technologies for transporting cargo or information, participants say. “It’s a gigantic experiment, performed by many people at the same time,” Joachim says. (Nature Nanotechnology, which is independent of Nature’s news team, is a sponsor of the race.)

The term nanocar is actually a misnomer, because the molecules involved in this race have no motors. (Future races may incorporate them, Joachim says.) And it is not clear whether the molecules will even roll along like wagons: a few designs might, but many lack axles and wheels. Drivers will use electrons from the tip of a scanning tunnelling microscope (STM) to help jolt their molecules along, typically by just 0.3 nano-metres each time — making 100 nanometres “a pretty long distance”, notes physicist Leonhard Grill of the University of Graz, Austria, who co-leads a US–Austrian team in the race.

Contestants are not allowed to directly push on their molecules with the STM tip. Some teams have designed their molecules so that the incoming electrons raise their energy states, causing vibrations or changes to molecular structures that jolt the racers along. Others expect electrostatic repulsion from the electrons to be the main driving force. Waka Nakanishi, an organic chemist at the National Institute for Materials Science in Tsukuba, Japan, has designed a nanocar with two sets of ‘flaps’ that are intended to flutter like butterfly wings when the molecule is energized by the STM tip (see ‘Molecular race’). Part of the reason for entering the race, she says, was to gain access to the Toulouse lab’s state-of-the-art STM to better understand the molecule’s behaviour.

Eric Masson, a chemist at Ohio University in Athens, hopes to find out whether the ‘wheels’ (pumpkin-shaped groups of atoms) of his team’s car will roll on the surface or simply slide. “We want to better understand the nature of the interaction between the molecule and the surface,” says Masson. 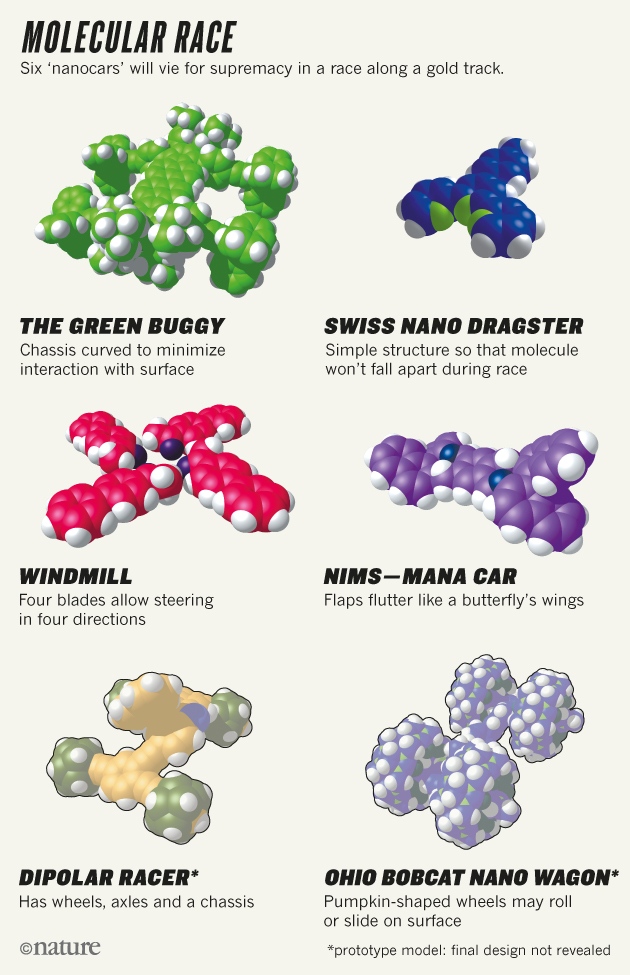 Simply watching the race progress is half the battle. After each attempted jolt, teams will take three minutes to scan their race track with the STM, and after each hour they will produce a short animation that will immediately be posted online. That way, says Joachim, everyone will be able to see the race streamed almost live.

Chemists have previously created tiny nanocars with wheels and axles — as well as molecular rotors and switches. The 2016 Nobel Prize in Chemistry, awarded to creators of nanomachines, has renewed interest in the field. However, the Nobel prizewinners worked mainly with large numbers of molecules in solution, Joachim says, whereas the researchers in this race are focusing on the interactions between single molecules and solid surfaces.

But cars on the nanoscale behave nothing like their real-life counterparts, making it hard to find uses for the machines. At these scales, electrostatic forces dominate and random thermal vibrations constantly shake molecules around. Consequently, nano-machines may end up behaving in un-expected or unpredictable ways, Grill says.

The Toulouse laboratory has an unusual STM with four scanning tips — most have only one — that will allow four teams to race at the same time, each on a different section of the gold surface. Six teams will compete this week to qualify for one of the four spots; the final race will begin on 28 April at 11 a.m. local time. The competitors will face many obstacles during the contest. Individual molecules in the race will often be lost or get stuck, and the trickiest part may be to negotiate the two turns in the track, Joachim says. He thinks the racers may require multiple restarts to cover the distance.