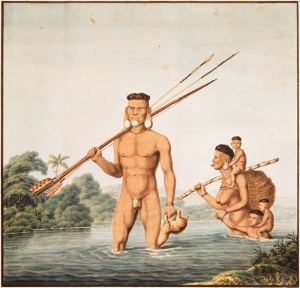 The Botocudo, a population indigenous to southeastern Brazil, share genetic markers with Polynesians.

Indigenous people that lived in southeastern Brazil in the late 1800s shared some genetic sequences with Polynesians, an analysis of their remains shows. The finding offers some support for the possibility that Pacific islanders traded with South America thousands of years ago, but researchers say that the distinctive DNA sequences, or haplogroups, may have entered the genomes of the native Brazilians through the slave trade during the nineteenth century.

Most scientists agree that humans arrived in the Americas between 15,000 and 20,000 years ago, probably via the Bering land bridge linking northeastern Asia with what is now Alaska. But the precise timing and the number of ‘migration waves’ is unclear, owing largely to variations in early Americans’ physical features, says Sérgio Pena, a molecular geneticist at the Federal University of Minas Gerais in Belo Horizonte, Brazil.

One broad group of these Palaeoamericans — the Botocudo people, who lived in inland regions of southeastern Brazil — stands out, having skull shapes that were intermediate between those of other Palaeoamericans and a presumed ancestral population in eastern Asia.

Now, a genetic analysis sheds light on the possible heritage of the Botocudo. Pena and his colleagues studied short stretches of mitochondrial DNA (mtDNA) in samples drilled from teeth in 14 Botocudo skulls kept in a museum collection in Rio de Janeiro. By analysing material from inside the teeth, the team minimized the possibility of contamination with DNA from the numerous people who have probably handled the skulls since they arrived at the museum in the late 1800s.

“But to call that haplogroup Polynesian is a bit of a misnomer,” says Lisa Matisoo-Smith, a molecular anthropologist at the University of Otago in Dunedin, New Zealand. The haplogroup is also found — albeit at a lower frequency — in populations living as far west as Madagascar.

Nevertheless, says Pena, it is a mystery how DNA from Palaeoamericans living in southeastern Brazil could include gene sequences typically found in Pacific islanders. “We have this finding,” he says. “Now we have to explain it.”

The researchers say that it is possible — but unlikely — that the DNA could have come from Polynesians who voyaged from remote islands to the western coast of South America. Those traders or their progeny would then have made their way to southeastern Brazil and settled or interbred with natives. But that, too, is improbable, says Pena, because the Andes are a formidable barrier that west coast residents typically did not climb or cross. Although researchers have suggested that ancestors of some species of chickens made their way to Chile through trade with pre-Columbian seafarers from Polynesia2, a subsequent study3 poked holes in that conclusion.

The researchers also entertain scenarios in which the haplogroup arrived in South America via the slave trade. Around 2,000 Polynesians were brought to Peru in the 1860s, and some could have ended up in Brazil, although the researchers say that they are not aware of any evidence that this occurred. And between 1817 and 1843, approximately 120,000 slaves were shipped from Madagascar to Brazil — and some of them were probably transported to areas where the Botocudo also lived. Although the researchers consider the latter scenario to be the most probable, Pena says: “We currently don’t have enough evidence to definitively reject any of these scenarios.”

“This is a pretty exciting initial result,” says Alice Storey, an archaeologist at the University of New England in Armidale, Australia. Further studies of genetic material from the skulls, including detailed analyses of nuclear DNA (which contains much longer genetic sequences than mtDNA), could offer more insight into the mysterious ancestry of the Botocudo, she says.