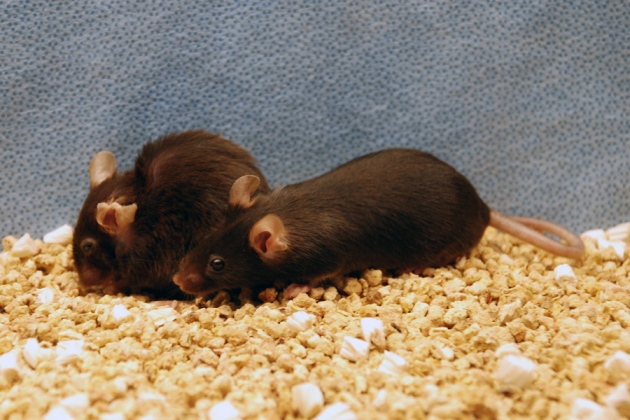 Two littermates, almost 2 years old; the mouse on the right had its senescent cells cleared by a drug from 1 year of age onwards.

Eliminating worn-out cells extends the healthy lives of lab mice — an indication that treatments aimed at killing off these cells, or blocking their effects, might also help to combat age-related diseases in humans.

As animals age, cells that are no longer able to divide — called senescent cells — accrue all over their bodies, releasing molecules that can harm nearby tissues. Senescent cells are linked to diseases of old age, such as kidney failure and type 2 diabetes.

To test the cells’ role in ageing, Darren Baker and Jan van Deursen, molecular biologists at the Mayo Clinic in Rochester, Minnesota, and their colleagues engineered mice so that their senescent cells would die off when the rodents were injected with a drug.

The work involved sophisticated genetic tinkering and extensive physiological testing, but the concept has an elegant simplicity to it. “We think these cells are bad when they accumulate. We remove them and see the consequences,” says Baker. “That’s how I try to explain it to my kids.”

Mice whose senescent cells were killed off over six months were healthier, in several ways, than a control group of transgenic mice in which these cells were allowed to build up. Their kidneys worked better and their hearts were more resilient to stress, they tended to explore their cages more and they developed cancers at a later age. Eliminating senescent cells also extended the lifespans of the mice by 20–30%, Baker and van Deursen report in Nature on 3 February1.

The research is a follow-up to a 2011 study, in which their team also found that eliminating senescent cells delayed the onset of diseases of old age in mice, although that work had been done in mice which had a mutation that causes premature ageing2.

In the hope of discovering therapies for diseases of old age, researchers are already looking for drugs that can directly eliminate senescent cells or stop them from churning out factors that damage neighbouring tissue. They include Baker and van Deursen, who have have licensed patents to develop such drugs to a company van Deursen has co-founded.

The team's experiment “gives you confidence that senescent cells are an important target," says Dominic Withers, a clinician-scientist who studies ageing at Imperial College London and who co-wrote a News and Views article for Nature that accompanies the Mayo Clinic report3. “I think that there is every chance this will be a viable therapeutic option.”