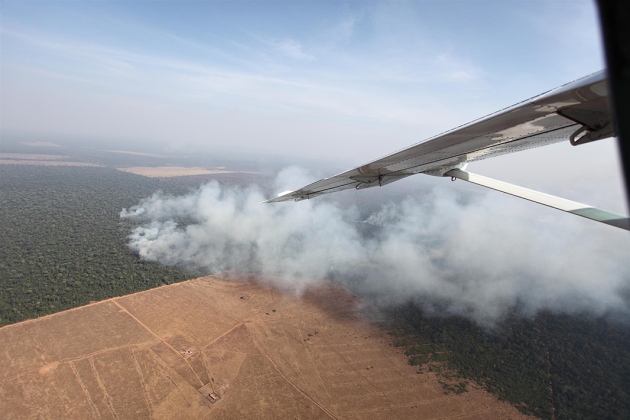 People burn parts of the Amazon to make way for farms or ranches.

Illegal deforestation in the Brazilian Amazon has spiked since 2015, bringing the rate to its highest level in 8 years. The finding has raised fears that the country could lose a decade’s worth of progress in forest protection.

In an analysis of satellite data released on 29 November, Brazil’s National Institute for Space Research (INPE) in São José dos Campos estimates that 7,989 square kilometres of land — nearly the size of Puerto Rico — was cleared between August 2015 and July 2016. The total was 29% above the previous year and 75% above the 2012 level, when deforestation hit a historic low of 4,571 square kilometres (see ‘Going up’).

The current trends illustrate a growing sense of impunity as well as betrayal among landowners who have yet to benefit from the sustainable-development agenda, says Daniel Nepstad, a tropical ecologist who heads the Earth Innovation Institute, an environmental organization in San Francisco, California. “There’s been a lot of talk about improving the lives and the bottom lines of farmers and ranchers if they stop clearing the forest,” Nepstad says, “and they are still waiting.” 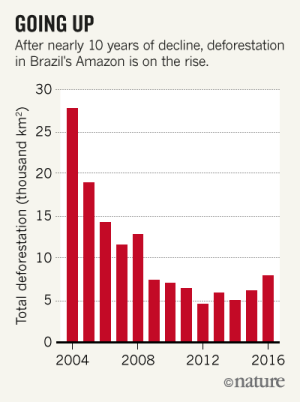 Brazil basked in the international limelight for nearly a decade after deforestation began to drop in 2005, thanks in part to stronger government enforcement as well as high-profile commitments to halt deforestation by the beef and soya-bean industries. But the government’s success sparked a political backlash. The Brazilian Congress relaxed the country’s forest protections in 2012, and many Brazilian lawmakers are pushing to further relax environmental laws to promote development across the Amazon.

Meanwhile, the country has been rocked by economic recession and ongoing political-corruption scandals. This has diverted both money and attention away from environmental enforcement, emboldening ranchers and illegal land traders to resume clearing land, says Paulo Barreto, a senior researcher at the Amazon Institute of People and the Environment, an activist group in Belém.

Barreto notes that beef prices have risen, as has the size of the forest tracts that are being cleared — a sign that the major players are investing in illegal deforestation. With the Brazilian government as weak as it is, Barreto says that he hopes the beef industry in particular will bolster its efforts to prevent the sale of cattle from newly cleared land.

This would be an act of self-interest, he adds, because the industry's public image, at home and abroad, depends on Brazil's continued success in protecting the Amazon. “In the end, this is bad for Brazil, not only in environmental terms but also in terms of agricultural markets.”