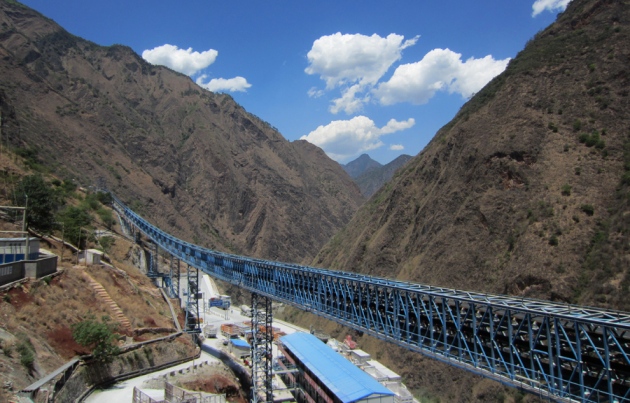 More than 1,000 metres underground, physicists have set traps of liquid xenon to catch their prey: hypothetical particles of dark matter that might very rarely interact with ordinary matter as they drift through Earth. With construction costs on the order of US$10 million each, such experiments are a relatively cheap way to work out the composition of 85% of the matter in the Universe. But does the world really need four of them?

Ongoing experiments in Italy, the United States and Japan are now being joined by a fourth in China, called PandaX (see ‘Dark and deep’). Installed in the deepest laboratory in the world, 2,500 metres under the marble mountain of JinPing in Sichuan province, PandaX will this year begin monitoring 120 kilograms of xenon. The team hopes to scale the tank up to 1 tonne by 2016, which would mean that the experiment had developed more quickly than any other dark-matter search. “We want to demonstrate that world-class research in dark matter is possible in China,” says Xiangdong Ji, a physicist at Shanghai Jiao Tong University in China and a spokesman for PandaX.

Dark-matter researchers in the West are excited by the ambition of the project, but some question the duplication of effort. “Spending all our money on different direct-detection experiments is not worth it,” says Stefan Funk, an astrophysicist at the SLAC National Accelerator Laboratory in Menlo Park, California, who admits that he is biased — he looks for dark matter indirectly, by watching the heavens for a possible γ-ray signal.

The proliferation of xenon experiments reflects infighting among the dark-matter hunters, as well as national ambitions to be first to answer one of physics’ most compelling questions. Observations of the rotation of galaxies and of the cosmic background radiation — the afterglow of the Big Bang — suggest that some 85% of matter in the Universe exerts gravitational pull, but does not radiate light. Leading theories suggest that such dark matter comes in the form of weakly interacting massive particles (WIMPs). If they exist, these would occasionally collide with nuclei of ordinary matter, so they could in principle be directly detected in a large tank of an atomically dense material such as xenon, which produces light when a nucleus recoils.

Such experiments are placed underground to minimize interference by cosmic rays that can mimic WIMPs. So far, they have seen nothing. The most progress has been made by XENON100, an experiment near L’Aquila, Italy, which has not detected a WIMP signal in 225 days of running time so far, ruling out the existence of heavier and more strongly interacting particles. In a few months, the XENON collaboration will start to scale up its detector to more than 1 tonne of xenon, making it 100 times more sensitive.

Enter PandaX, which was born when China’s National Natural Science Foundation and Ministry of Science and Technology funded a team that included members of the XENON collaboration. They set up an experiment of their own, deep within JinPing mountain, in a small laboratory that opened in 2011 after just two years of construction. PandaX hopes to rival XENON100’s current sensitivity for lighter WIMPs by the end of this year, although Ji acknowledges the challenges of working in a remote area of central China while relying on overseas suppliers for many parts. Just last week, the team was unable to cool down its experiment because of a delay in the delivery of liquid nitrogen. But because PandaX is more than a kilometre deeper than the other experiments, it needs less shielding from cosmic rays, which will make it easier to scale up.

China, together with a consortium of universities including some in the United States, is spending about $15 million to build PandaX, but the team would like more international partners. In January, PandaX applied to the US Department of Energy (DOE), which has not set up an agreement to work with the Chinese foundation, but the US agency declined. Instead, the DOE is spending its money on another group that split off from the XENON collaboration: the Large Underground Xenon (LUX) experiment at the Homestake gold mine in South Dakota.

“Spending all our money on different detection efforts is not worth it.”

Homestake was once meant to be the site of a major underground laboratory. But the lab’s main funder, the US National Science Foundation (NSF), dropped the idea in 2010 (see Nature http://doi.org/bcbr7z; 2010), leaving the DOE to run it alone and bear the whole cost of the constant pumping required to prevent the mine from flooding.

LUX might be the most vulnerable of all the xenon experiments, says Juan Collar, a physicist at the University of Chicago in Illinois who looks for lighter WIMPs with a number of smaller experiments. “The funding situation is really terrible,” he says. The DOE has indicated that it plans to reduce the number of large dark-matter experiments it funds in October, so LUX could face the axe. US contributions to XENON100 are funded through the NSF, so it won’t be subject to the winnowing process.

Rick Gaitskell, a physicist at Brown University in Providence, Rhode Island, and spokesman for LUX, says that the United States needs its own deep underground lab to maintain its dark-matter expertise. “Why would we give up that leadership position and move all that experience overseas?” he asks.

But Ji, who now has access to perhaps the best underground lab in the world, says that some consolidation is inevitable. The inter­national community is unlikely to support more than two xenon experiments with multi-tonne detectors, he says, and the United States will need to choose which effort to back. In the meantime, he says, it is not a bad idea to have many groups working to improve the technology. “That will help build the ultimate dark-matter experiment.”

This story originally gave the wrong value of 25 kg instead of 120 kg for the usable amount of xenon at PandaX. The text has been corrected to reflect this.