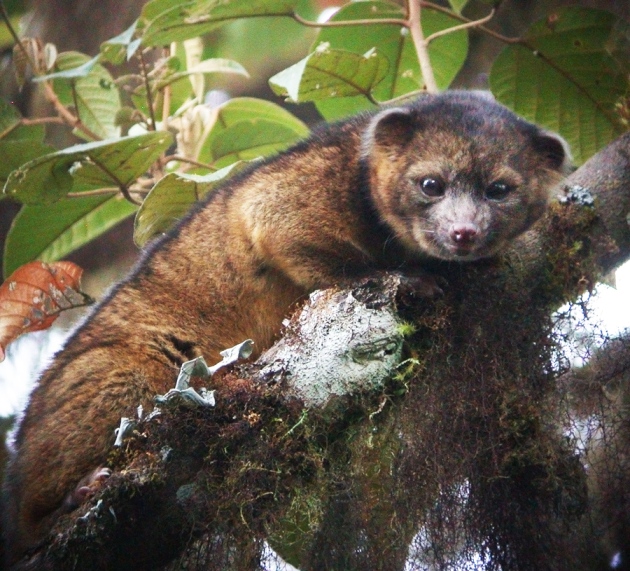 The olinguito (Bassaricyon neblina) was first discovered in the wild in Ecuador.

A misidentified mammal from the Andes mountains has been revealed as a previously unknown carnivore species — the first to be discovered in the Western Hemisphere for 35 years.

The olinguito (Bassaricyon neblina) is a member of the racoon family. It looks like a cross between a house cat and a teddy bear, say its discoverers, who publish their finding today in ZooKeys1. The zoologists first caught a glimpse of the nocturnal creature in the wild in 2006, during a night hike in Ecuador. They tracked down the 75-centimetre-long, bushy-tailed creature by sound, listening for rustling branches as it leapt from tree to tree, 30 metres above the ground in a cloud forest.

“Sometimes when you look up all you see is clouds”, says Roland Kays, zoologist at the North Carolina Museum of Natural Sciences in Raleigh and a co-author of the study. “I think that’s part of the reason they stayed hidden from science for so long.”

The research team was tipped off to the olinguito’s existence in 2004, from decades-old museum samples stored in metal cabinets in the archives of the Field Museum in Chicago, Illinois. Kristofer Helgen, a mammal curator at the Smithsonian National Museum of Natural History in Washington DC, was in Chicago to study Andean mammals called olingos, which make up several species in the genus Bassaricyon. He noticed that some of the museum’s dozens of olingo specimens had smaller skulls and more colourful fur than the rest.

On closer examination of specimens at other museums — some more than 100 years old — Helgen found that they made up a separate, closely related species with smaller ears than olingos, as well as shorter tails and different teeth. “Almost every feature will help you tell them apart,” says Helgen.

So the team went to Ecuador to track down a living specimen and collect some DNA. When they returned, the researchers compared the DNA with that of other animals in the racoon family. To their surprise, they found that there were already olinguito genetic sequences in DNA databases: the samples came from a zoo animal captured in 1967 in the mountains of Colombia. That olinguito, named Ringerl, had been thought to be an olingo, and had been sent to several US zoos in unsuccessful attempts to breed her with male olingos until she died in the mid-1970s.

Lawrence Heaney, curator of mammals at the Field Museum, is surprised that it took so long to identify the olinguito. However, he says, “there are lots and lots of new species undoubtedly still to be found in museum collections”.