Six years might seem like a long time to spend piecing together the structure of a scrap of tissue vastly smaller than a bead of sweat. But that is how long it has taken a team led by cell biologist Jeff Lichtman from Harvard University in Cambridge, Massachusetts, to digitally reconstruct a tiny cube of mouse brain tissue.

The resulting three-dimensional map1 is the first complete reconstruction of a piece of tissue in the mammalian neocortex, the most recently evolved region of the brain.

Covering just 1,500 cubic microns, it is still a far cry from reconstructing all 100 billion or so cells that make up the entire human brain. But Christof Koch, president of the Allen Institute for Brain Science in Seattle, Washington, notes that the various technologies involved will speed up “tremendously” over the next decade: “I would call this a very exciting promissory note,” he says.

Lichtman’s team already has its eyes on a much bigger challenge: reconstructing a cubic millimetre of rodent neocortex — a piece of tissue around 600,000 times larger than the present achievement. The researchers will be doing this as part of a consortium that earlier this month received preliminary approval for major funding by the US government agency IARPA (Intelligence Advanced Research Projects Activity), which promotes high-risk, high pay-off research. The goal of the consortium, based at Harvard and at the Massachusetts Institute of Technology (MIT) in Cambridge, is to map the function as well as the anatomyof this tiny brain volume, while also working out how it computes information as an animal learns.

The neocortex is of particular interest to neuroscientists, and is greatly expanded in humans compared with other mammals. As is the case with other brain areas, neocortical function is determined by how individual neurons are connected to each other through synapses. These tiny structures, which can be seen only with an electron microscope, allow chemical or electrical signals to pass between cells and can be pruned or created anew as an animal attunes itself to its environment. Most synapses are forged between the finger-like dendrites that branch from one end of a neuron and the long thin axons that separate dendrites from the neuron’s cell body.

Reconstructing a part of the neocortex to this level of detail required a multi-step procedure. First, a diamond blade shaved a region of a mouse neocortex called the somatosensory cortex into several thousand slices; these were then rolled onto a single long strip of a special plastic tape at a rate of 1,000 sections every 24 hours. The sections were imaged with a scanning electron microscope powerful enough to capture even the tiny vesicles that contain the chemical signalling molecules — known as neurotransmitters — in synapses. 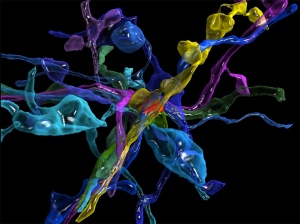 Digital reconstruction of mouse brain fragment is freely available to the scientific community.

To reconstruct their tiny cube of tissue, the team homed in at the highest resolution around the dendrites of two neighbouring neurons. The researchers aligned the relevant digital images so that the parts of each cell in each slice coincided with their positions on adjacent slices. To follow the individual cells through the different slices, they developed computer programs to assign a particular colour to every cell and to trace each one, either automatically or with input from researchers. The cube of tissue was too small to contain an entire cell, but large enough to contain fragments of more than 1,600 neurons and of other brain cells of at least six different types, as well as around 1,700 synapses.

One feature revealed by this reconstruction, which  is now freely available to the scientific community, was that one neuron does not form synapses with another neuron just because the two happen to be physically close to each other, as some neuroinformaticists had assumed. Instead, the cells have very clear preferences for particular neighbours. This had already been observed in the retina, a simpler part of the brain, and in the hippocampus, an evolutionarily older brain area. The answer to what confers these preferences may be found in ongoing studies to identify the molecular components of each synapse, says neuroscientist Seth Grant at the University of Edinburgh, UK.

The Lichtman team is now working on similarly-sized reconstructions of the corticial tissue of baby mice, in order to see if synpases behave the same way in an earlier stage of development. The researchers are also reconstructing a small piece off human brain acquired during surgery.

As well as improving our understanding of the brain, such reconstructions may inspire new methods of computing. The IARPA contract that is being negotiated with the Harvard–MIT consortium of 13 labs will be part of the agency’s Machine Intelligence from Cortical Networks (MICrONS) programme, and worth tens of millions of dollars, says MICrONS head Jacob Vogelstein. “The general goal of the MICrONS programme is to revolutionize machine learning by reverse-engineering from codes discovered in the brain,” says Vogelstein. “IARPA also invests in neuroscience because we are interested as well in understanding cognition — how people behave and make decisions.”