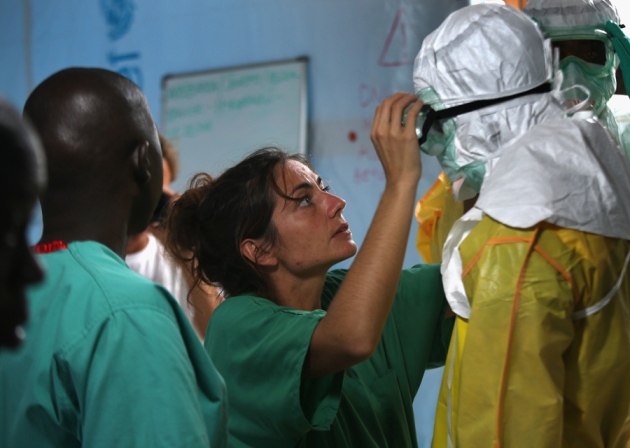 Twenty thousand people may get infected before the Ebola outbreak in West Africa ends.

Controlling the Ebola outbreak in West Africa will require a cash infusion of up to US$490 million from international donors over the next six to nine months, the World Health Organization (WHO) said on 28 August.

The figure, described in a WHO report, is significantly higher than the agency's 31 July request of $71 million to fight the outbreak. It is based on the WHO's estimate that more than 20,000 people could be infected in the course of the episode. The $490 million would pay only for immediate response to Ebola, not the long-term rebuilding of ravaged health-care systems in West Africa that experts say will be necessary once the disease is contained. “This is putting out the fire, not building the firehouse,” says WHO assistant director-general Bruce Aylward.

The WHO estimates that 750 foreign health-care workers and 12,000 workers from the affected countries will be necessary to meet the goal of stemming the Ebola outbreak within six months. The agency did not offer figures on how many health workers are already involved in Ebola response.

WHO member states are expected to foot the bill for the effort, along with sources such as the World Bank and the African Development Bank, which have already pledged $200 million and $210 million, respectively. By comparison, the WHO’s budget for response to outbreaks and crises of all kinds is only $228 million; it was slashed by half last year owing to budget restructuring and the economic downturn.

The agency has a three-part plan to fight the Ebola epidemic, which has now killed more than 1,550 people. First, governments and first responders must ensure that all affected geographic areas have adequate surveillance and health care in the next three months so that standard strategies for containment and tracking the spread of the disease will work. Second, countries need to contain any outbreaks in new regions within eight weeks; and finally, countries must strengthen their capacity to detect and respond to cases.

The $490 million estimate assumes that the outbreak is two to four times larger than the WHO has been able to detect, because many cases of infection are probably going unreported. It also assumes that within two weeks, health workers will be able to convince airlines to resume flying to regions where Ebola is rampant. The decisions by airlines to suspend flights to these areas have seriously hampered the ability of the WHO and other groups to deliver personnel and protective equipment. If the travel restrictions continue, transportation costs could rise substantially.

Jeremy Youde, a political scientist at the University of Minnesota Duluth, says that the WHO's transparency is admirable and demonstrates why its plan to fight Ebola is a worthy investment. But he wonders whether $490 million will be enough to end the current outbreak, and suggests that funding could become more difficult to obtain as the situation continues.

Youde says that the WHO is probably thinking about its immediate Ebola response in relation to its long-term budget. Member states, which supply 77% of the WHO budget, “could say ‘We gave $100 million for Ebola, so we can't pony up for flu,’” says Youde.

But Barry Bloom, a public-health researcher at the Harvard School of Public Health in Boston, Massachusetts, says that the WHO could benefit if its Ebola response is effective, by strengthening the agency's case for funding in future years, especially for improving health systems generally in developing countries. “The hope is that in the course of putting on the band-aids, there will be some training,” he says.