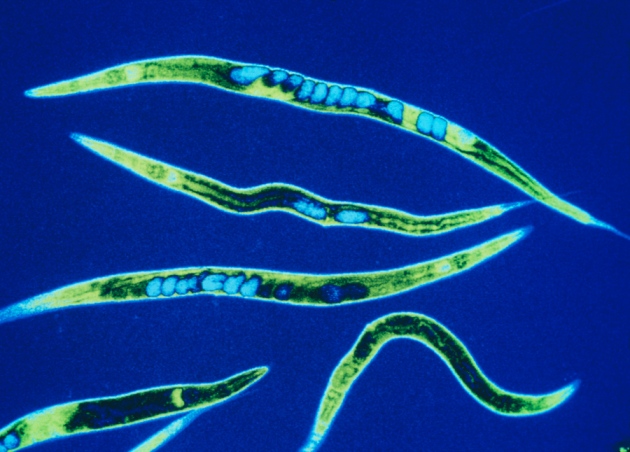 Caenorhabditis elegans treated with a α-ketoglutarate displayed youthful vigour even after two weeks.

A compound available in some dietary supplements extends lifespan in the nematode worm Caenorhabditis elegans by interfering with cellular energy production and mimicking the effects of severe calorie restriction. The results, published online in Nature today1, suggest that the compound, called α-ketoglutarate, could provide a way to increase longevity.

Though intriguing, data linking the compound to longevity are limited to short-term studies in a worm and should not lead people to start taking α-ketoglutarate supplements, cautions Matt Kaeberlein, who studies ageing at the University of Washington in Seattle. “I'm not sure I would characterize α-ketoglutarate as an anti-ageing drug yet,” says Kaeberlein, who was not involved in the study. “It’s premature.”

Chemical biologist Jing Huang at the University of California in Los Angeles and her colleagues stumbled on α-ketoglutarate while screening metabolites for the ability to improve lifespan in C. elegans. α-ketoglutarate boosted longevity by about 50% over untreated controls.

Differences in behaviour were also clear, says Huang: as untreated worms surpassed the age of two weeks, they became sluggish. “They move their head if you poke them,” she says, “but otherwise there’s not much activity.” Treated nematodes, however, wriggled and squirmed with youthful vigour.

α-Ketoglutarate is a component of a metabolic pathway called the tricarboxylic acid cycle, which is part of cells' energy-generating machinery. Huang and her colleagues found that α-ketoglutarate can also inhibit a crucial enzyme called ATP synthase. That enzyme is the main producer of ATP, the chemical energy currency in cells, and so reduces energy production in the body.

Huang and her colleagues reasoned that the interruption in energy production could mimic the effects of diets very low in calories, which have been shown to extend lifespan in some animals. To back up this notion, they also showed that calorie restriction raised levels of α-ketoglutarate.

Calorie restriction had no added effect on longevity in worms given α-ketoglutarate, suggesting that the metabolite is a key part of the mechanism by which low-calorie diets aid longevity. If this is so, the findings hint at a way to gain the benefits of calorie restriction without the suffering. Only a dedicated few are able to withstand the rigours of such dietary deprivation.

But while the results are promising, researchers need to pursue longer-term studies in animals that more closely resemble humans to fully understand α-ketoglutarate’s potential, cautions Brian Kennedy, president of the Buck Institute for Research on Aging in Novato, California. “We don’t just want to make the animals live longer,” he adds. “We want to make them healthy longer.”

And impairing the body's ability to produce energy could have unpleasant side-effects. Depleted energy stores can lead to muscle fatigue, says Michael Ristow, who studies energy metabolism at the Swiss Federal Institute of Technology in Zurich. “Exercise does the same thing.”

If the results do stand up in future studies, α-ketoglutarate may become the latest addition to an expanding medicine chest of potential life-lengthening elixirs. Last week, researchers reported that a protein enriched in the blood of young mice could rejuvenate older mice2. And previous studies have suggested that the drug rapamycin, used to suppress the immune system following organ transplants, could also boost lifespan in mice.