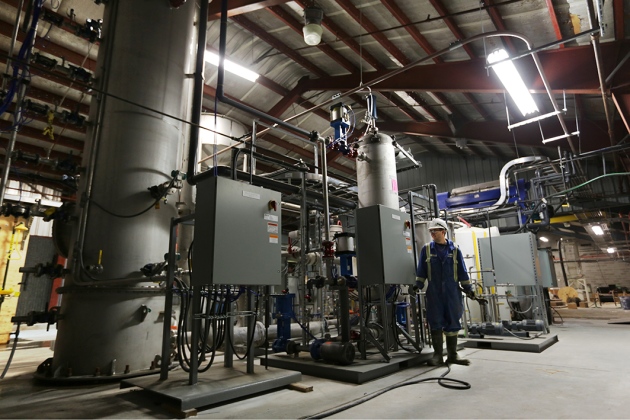 It has long been regarded as one of the more blue-skies solutions to climate change. Now two companies have vastly increased their capability to suck carbon dioxide from the air. One, based in Canada, plans to convert captured CO2 into diesel to fuel buses; the other, in Switzerland, will sell it on to a firm that uses CO2 to boost crop growth in greenhouses.

The carbon emissions that this will save are not significant. But David Keith, executive chairman of the Canadian firm, Carbon Engineering in Calgary, and a climate physicist at Harvard University in Cambridge, Massachusetts, says that his company’s air-capture plant will position the technology to be further scaled up. Most significantly, he says, the plant will now run the whole process — from CO2 capture to regeneration — for the first time.

Others are excited by the development. “The fact they’re getting to commercial-scale proto­types is incredibly encouraging,” says Noah Deich, executive director of the Center for Carbon Removal in Berkeley, California.

More than a dozen facilities worldwide, including oil refineries and power plants, already capture millions of tonnes of CO2 from the flue gases they expel. The idea of capturing carbon directly from the atmosphere — where CO2 is present in much lower concentrations than in flue gases and so is harder to extract — has been around for several years, but only in the form of small, demonstration projects.

On 9 October, Carbon Engineering officially opened a new plant in Squamish, British Columbia, that can capture and process around 1 tonne of CO2 per day — about the same as a typical car might emit when driven about 5,000 kilometres. This represents a big step up from the company’s earlier demonstration plant, which ran only the first step of capture and did not regenerate gaseous CO2.

The plant uses fans to push air through towers containing potassium hydroxide solution, which reacts with CO2 to form potassium carbonate; the remaining air, now containing less CO2, is released. Further treatment of the solution separates out the captured CO2, regenerating the capture solution for reuse. These processes are currently powered by electricity, which in British Columbia is mainly generated by hydroelectric sources, says Keith. Initially, the company will re-release the captured CO2, but Carbon Engineering announced last week that it had signed a Can$435,000 (US$333,000) deal with the province of British Columbia to assess the potential of turning the CO2 into fuel to power local buses.

Meanwhile, the Swiss company, Climeworks in Zurich, announced at a UK meeting on greenhouse-gas capture in Oxford earlier this month that it plans to start capturing CO2 on a commercial scale. Its plant in Hinwil, Switzerland, will capture 1,000 tonnes of CO2 per year starting in mid-2016, according to Anca Timofte, a process engineer at the company.

In some ways the technology is similar to that of Carbon Engineering, but Climeworks will instead use granules to soak up the CO2, using a module that will sit on top of an incineration plant. (The technology is still classed as air capture because the material will scrub CO2 from air near the plant rather than from the expelled gases.) Waste heat from the incinerator will be used to drive the captured CO2 off the granules, which can then be reused. 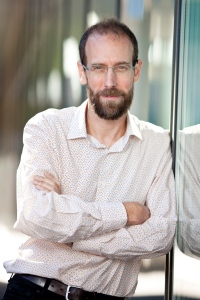 The company has arranged to sell CO2 produced in this way to the firm Gebrüder Meier, which will use it to increase crop yields in greenhouses. Climeworks is also assessing the beverage industry as a source of potential customers, says Timofte.

If such companies are to scale up further and make money, one challenge will be finding buyers for their CO2, says Tim Kruger, a geoengineer at the University of Oxford, UK, who organized the Oxford meeting and runs a company, Origen Power, that hopes to generate carbon-negative energy. And it is not clear whether companies will be able to produce CO2 or related products at a price that is competitive enough to attract a wide pool of clients.

In 2011, a report from the American Physical Society (APS) estimated that air capture would cost at least US$600 per tonne of CO2, assuming a large system that removed 1 million tonnes of CO2 per year. But Climeworks says that its price will be in that range in the first year of its plant’s operation, despite being on a smaller scale than the APS example. The company also expects that cost to fall as the technology develops. Keith, meanwhile, says that the CO2 produced by Carbon Engineering’s plant is expensive, but emphasizes that it is a pilot; he says that prices of $100–200 per tonne of CO2 are realistic for the bigger iterations that it is planning.

Even if the companies cannot compete on price with conventionally manufactured CO2 (which can be as low as tens of dollars per tonne but can be significantly higher), there are other factors that could help to create demand for air-captured CO2. The introduction of a carbon tax could incentivize big emitters to pay other companies to mop up their CO2 to avoid paying the tax. And if the world is ever to become completely carbon neutral, air capture will have a part to play, says Nilay Shah, an engineer working on low-carbon technologies at Imperial College London.

Efforts to mitigate climate change should focus on capturing CO2 at the source. But there are many scenarios in which pre-emission capture is not viable. “Once you start to get into things like capturing carbon from vehicles or from household boilers, that’s much more expensive,” says Shah. “You may well be better off capturing CO2 from the air.”

Keith emphasizes that his company is not trying to fix climate change on its own. “Air capture has been stuck in a catfight between one group of people saying it’s a silver bullet and one group saying it’s bullshit,” he says. “The truth is it’s neither.”