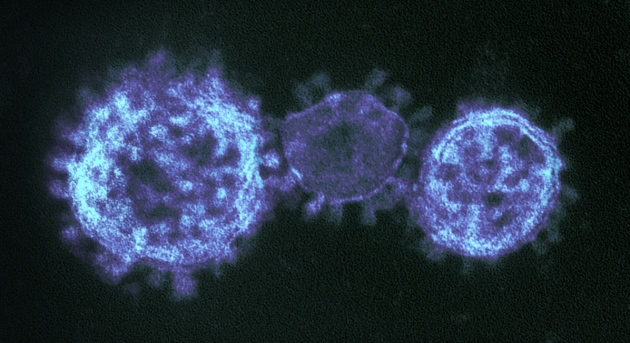 A new coronavirus found in the Middle East is one of a family of viruses named after the corona-like appearance of their surface spikes.

Is the coronavirus that has appeared in the Middle East a simmering threat to global public health or a viral footnote that will end up being of interest only to academics? That is the key question that researchers and public-health officials are now struggling to resolve. Two unsettling developments have fed their concerns: fresh hints that the virus might show at least limited spread from person to person, and signs that it has extended its geographical range.

Last week, the World Health Organization (WHO) urged that surveillance for the virus, called human betacoronavirus 2c EMC/2012, should be extended to all countries worldwide, with a special focus on all clusters of severe pneumonia, particularly in health workers. Epidemiologists say that the nebulous threat requires close monitoring, by investigating and controlling any new clusters of human cases that could signal that the virus has adapted to spread between people more easily.

The coronavirus, first reported on 20 September, causes severe pneumonia and often kidney failure. In the nine cases confirmed so far, it has had a death rate of more than 50%. “It’s an extremely serious disease; it’s very much in the category of H5N1 [avian influenza],” says David Heymann, chairman of the UK Health Protection Agency and former head of the communicable-diseases programme at the WHO during the 2003 SARS epidemic, caused by a different coronavirus. Yet this latest coronavirus is still limited to the Middle East and shows no sign of spreading easily between people, Heymann emphasizes.

In late November, however, the WHO reported a household cluster of four cases in Saudi Arabia, in which two people died. Retro­spective tests looking for the coronavirus in samples from a cluster of 11 people who were admitted with serious respiratory symptoms to a hospital in Jordan in April have revealed the virus in another two fatal cases. This pushes back the first known date of its emergence by several months and marks the first evidence for infection outside Saudi Arabia and Qatar.

Although independent infections from the same animal or environmental source might explain these outbreaks, such clusters always raise the possibility of transmission between humans. Because the disease did not spread any further, however, person-to-person transmission of the virus — if it occurred at all — would have had to have been through close contact. Still, the extension of the disease to Jordan, and the identification of these earlier cases, marks a significant epidemiological development and suggests that infections may have gone undetected in other countries.

What is needed now, says Heymann, is “good old shoe-leather epidemiology; that’s what worked in SARS”. Epidemiologists need to talk to the families and neighbours of any infected people; try to track down everyone who has come into contact with them to look for symptoms and test for the virus; and isolate infected people to try to stop any spread.

Researchers including Christian Drosten, director of the Institute of Virology at the University of Bonn Medical Centre in Germany, have moved quickly to develop diagnostic tests to determine whether people or samples are infected with the coronavirus1, 2. These tests are now being rolled out by many national health authorities, and Drosten says that a survey in Europe is showing a particularly quick response.

“It’s an extremely serious disease; it’s very much in the category of H5N1.”

Teams from the WHO and the US Centers for Disease Control and Prevention in Atlanta, Georgia, have been helping countries in the Middle East to boost surveillance. During the annual hajj religious pilgrimage in Saudi Arabia in late October, when millions of people visited the country before returning home — a potential recipe for global virus spread — both Saudi Arabia and return countries were on high alert.

Beyond immediate surveillance efforts, increased monitoring for coronavirus antibodies in the wider population should help to pin down the true death rate. The current high death rate would fall, for example, if many people in the vicinity of cases turn out to have antibodies to the virus but have not developed serious disease.

Meanwhile, laboratory studies are shedding light on the virus itself. This week, a team including Drosten has shown that this coronavirus seems to differ from the SARS virus in some important ways3. Because the SARS virus binds to the ACE-2 receptor on human cells deep in the lungs, it causes serious disease in the lower respiratory tract but is relatively difficult to contract and is not easily spread by coughing or sneezing. The researchers have determined that the new coronavirus does not bind to the ACE-2 receptor, but declined to elaborate on which receptor it does use, pending a separate publication. But ruling out the ACE-2 receptor has immediate practical implications — all the reagents and therapeutic strategies developed for the SARS virus will be of little use with this latest virus, says Drosten.

The same team also found that cells from bats, pigs and humans can all be infected in the lab with the coronavirus. This suggests that it is “promiscuous among mammals”, says Drosten, and that it might jump readily between mammal species, although he cautions against extrapolating such in vitro studies to the real world.

More clues have come from Ian Lipkin, a renowned ‘virus hunter’ from Columbia University in New York, who was invited by the Saudi government in October to study the first cases there. He told Nature that he has discovered that partial genetic sequences of a virus isolated from bats match the coronavirus found in humans. “The finding gives insight into the original source of the virus,” he says.

The route taken by this coronavirus to infect humans is still not clear. It could, for example, be carried by intermediate animal hosts, or in foodstuffs contaminated by the faeces of bats or other infected animals. To answer that, says Lipkin, “one would need to work for months”. He hopes to send in another team to work alongside his Saudi colleagues in the near future.

INTERACTIVE TIMELINE
A novel coronavirus, called human betacoronavirus 2c EMC/2012, has caused a handful of infections in three countries in the Middle East. Although it does not seem to transmit between humans, it can cause severe disease and death, and scientists are watching closely for new cases.

A cluster of 11 cases of respiratory disease at a hospital in Amman, Jordan, tests negative for coronaviruses. But retrospective testing in November reveals that the two fatal cases were caused by a new coronavirus.

A cluster of 11 cases of respiratory disease at a hospital in Amman, Jordan, tests negative for coronaviruses. But retrospective testing in November reveals that the two fatal cases were caused by a new coronavirus.

The first identified infection with the new coronavirus involves a 60-year-old man, who is admitted to the Dr Soliman Fakeeh Hospital in Jeddah, Saudi Arabia, with severe pneumonia and acute renal failure. He dies on 24 June.

Ali Mohamed Zaki, a microbiologist at Dr Soliman Fakeeh Hospital in Jeddah, Saudi Arabia, announces on online disease-reporting system ProMED that the infection was caused by a novel coronavirus.

The UK Health Protection Agency reports that it has confirmed a second case: a 49-year-old man from Qatar who fell ill on 3 September with similar symptoms.

Researchers at the Erasmus Medical Centre in Rotterdam, the Netherlands, deposit the coronavirus genome sequence in GenBank, and give it the provisional name human betacoronavirus 2c EMC/2012.

A new case of coronavirus infection is confirmed in Saudi Arabia.

Saudi Arabia reports a cluster of four cases of respiratory disease. Three are subsequently confirmed as having the coronavirus, and two of the patients die.

A new coronavirus case is reported in Qatar.

The World Health Organization in Geneva, Switzerland, urges a global surveillance effort for the coronavirus, and advises health authorities to thoroughly investigate any clusters of severe respiratory disease, including testing suspect cases for the virus.

The World Health Organization has so far reported a total of nine cases, including five deaths, in Saudi Arabia, Qatar and Jordan.