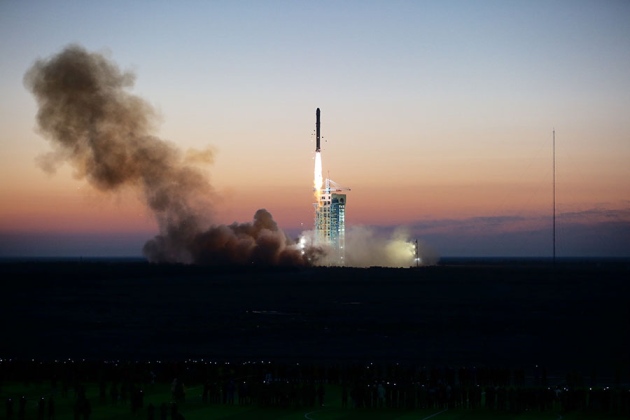 The Monkey King spacecraft, which took to the skies on 17 December, is designed to detect the high-energy particles produced by annihilating dark matter.

Against a purple morning sky, in a cloud of brown smoke, the Monkey King took off. China’s first space-based dark-matter detector — nicknamed Wukong (or Monkey King) after a warrior in a sixteenth-century Chinese novel — rocketed into the air on 17 December, marking the start of a new direction in the country’s space strategy.

From Earth’s orbit, the craft aims to detect high-energy particles and γ-rays. Physicists think that dark matter — a substance thought to make up 85% of the Universe’s matter but so far observed only through its gravitational effects — could reveal itself by producing such cosmic rays as its constituent particles annihilate.

Wukong, officially called the Dark Matter Particle Explorer (DAMPE), is also notable for being the first in a series of five space-science missions to emerge from the Chinese Academy of Sciences’ Strategic Priority Program on Space Science, which kicked off in 2011.

China is already one of the world’s major space powers, but so far has focused on human and robotic exploration, with little investment in space science. (A notable exception is the Double Star probe launched in collaboration with the European Space Agency in 2003 to study magnetic storms on Earth.)

The DAMPE lift-off from the Jiuquan Satellite Launch Center in northern China will be followed next year by a further two missions: the world’s first quantum-communications satellite and an X-ray telescope observing in a unique energy band. Together, these missions mark a new start for space science in China, says Wu Ji, director-general of the National Space Science Center (NSSC), which runs the programme.

Other countries have had Moon missions, adds Pan Jian-Wei, chief scientist for the quantum-science satellite, but with the space-science satellites, “we can do something new and something really great and not only for China — for the whole world”.

The public gave DAMPE its nickname, Wukong, earlier this week, as part of an outreach drive in China’s space programme; a similar open effort also produced the name Yutu, or Jade Rabbit, for the nation’s lunar rover, which landed in 2013.

Wukong will use its relatively large detection area to observe high volumes of cosmic rays, as well as where they come from. It will survey the sky at energies much higher than do existing detectors such as the Alpha Magnetic Spectrometer (AMS), which is currently attached to the International Space Station. “We don’t know if this is a better way to search for dark matter, because dark matter has not yet been found,” says Michael Capell, an AMS physicist at CERN, Europe’s particle-physics laboratory near Geneva, Switzerland.

The detector could help to clear up some mysteries. In 2013, the AMS team announced that it had seen hints of dark matter, but so far it has detected too few high-energy particles to say for sure. DAMPE lacks the equipment to clarify the situation directly, but it could reveal whether the signal is from an astrophysical source other than dark matter, such as pulsars, says Capell.

Although it will collect fewer incoming photons than existing γ-ray telescopes such as NASA’s Fermi-LAT, DAMPE is better at pinpointing the energies of these particles, says Miguel Sánchez-Conde, a physicist at the Oskar Klein Centre for Cosmoparticle Physics in Stockholm. This capability should allow DAMPE to see sharp spikes in radiation that are predicted by some dark-matter models.

The two experiments that will follow hot on Wukong’s heels are no less ambitious. The quantum-science satellite, to launch in June, will be the world’s first space experiment to probe the phenomenon known as quantum entanglement. The mission will test whether a pair of entangled photons beamed from the satellite to two ground stations can remain entangled over a record-breaking distance of more than 1,000 kilometres.

The experiment will also test whether a quantum connection can be set up between a ground station and the satellite and used to ‘teleport’ information instantly and securely. Previously, such experiments have transmitted photons on Earth through optic fibres or air, and over much shorter distances. The eventual goal is to create a global quantum-communications network, says Anton Zeilinger, a physicist at the University of Vienna who is collaborating with Pan on the quantum satellite. By pushing the limits of quantum entanglement, Pan says, the satellite may also help to solve fundamental mysteries about the Universe, such as how to unite quantum mechanics with Einstein’s theory of general relativity. 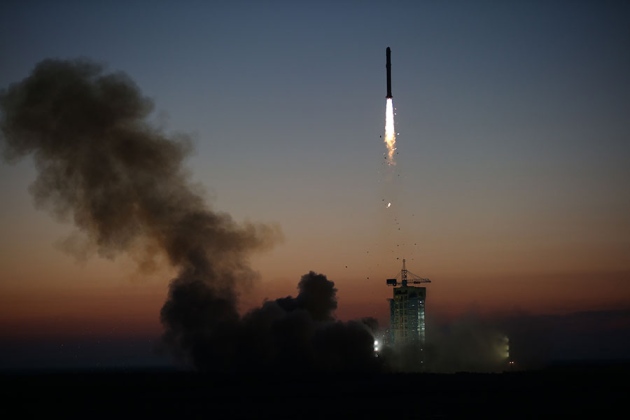 The launch of the DAMPE satellite marks the start of a new direction in China's space strategy.

In the second half of the year, China will launch the Hard X-ray Modulation Telescope (HXMT), looking for bright and brief sources of radiation, such as growing black holes. The HXMT will do a broad sweep of the sky, with a sensitivity at the top of its large energy range that exceeds those of existing wide-field telescopes, says Luigi Piro, an astronomer at Italy’s National Institute for Astrophysics in Rome.

Quantum communications leap out of the lab

All three are cutting-edge missions, with the potential to make real discoveries, says Wu — but he is still not satisfied. Space science in China is funded in 5-year cycles, receiving around 3 billion yuan (US$460 million) in the current round. As a result there is no permanent funding, unlike in the United States and Europe, which makes it difficult to make long-term plans. “We don’t feel it is secure,” says Wu. “It is better than nothing. But we are still catching up.” He believes that until China makes discoveries in space science, “we are not a real space power”.

The current funding round runs out next year. Although Wu thinks that the Chinese Academy of Sciences will continue to support the programme for another five years, that will be confirmed only next year. The funding will have to cover the remaining two missions — a satellite, Shijian-10, to conduct microgravity and life-sciences experiments, and a space-weather satellite known as Kuafu.

The US Congress passed a law in 2011 that prevents NASA from collaborating with China except in rare circumstances. By contrast, the European Space Agency wants to work with China and is already collaborating with the Chinese academy on a small space-weather observatory, the Solar wind Magnetosphere Ionosphere Link Explorer (SMILE).

China’s limited experience in space science, alongside its politics, has hampered collaboration so far, says Joan Johnson-Freese, who specializes in China’s space programme at the US Naval War College in Newport, Rhode Island. But the country is anxious to develop and establish its expertise, she adds.

Chinese scientists would like to collaborate with the United States, says Wu, but the severed ties hurt the United States more than China. “It gave a good chance for the Europeans. The US should realize that.