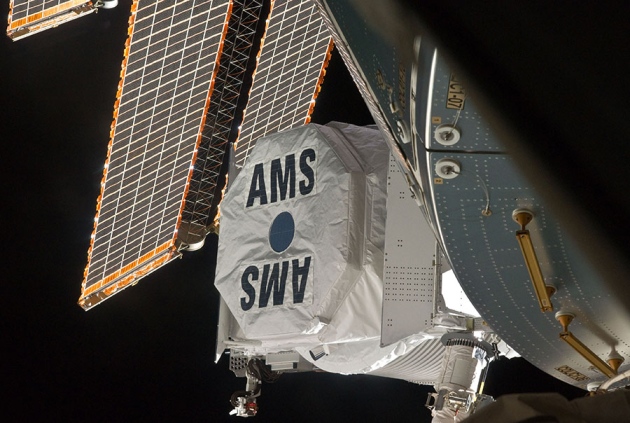 The Alpha Magnetic Spectrometer has flown on the International Space Station since 2011.

The operators of a US$2-billion dark-matter experiment aboard the International Space Station are striving to figure out how to keep three crucial cooling pumps working after the failure of a fourth last year. The glitch raises the most serious concerns yet about whether the Alpha Magnetic Spectrometer (AMS), which probes cosmic rays for signs of dark matter being annihilated in deep space, will last until the space station's planned retirement in 2024. Originally designed for a three-year mission, the AMS is in its fourth year with nine to go.

“We are analysing a whole host of possibilities” for what went wrong with the cooling pump and how to fix it, says Mark Sistilli, the AMS programme manager at NASA's headquarters in Washington DC. Tests have already ruled out one possibility, that radiation fried the broken pump’s electronics.

The AMS continues to gather science data using the three remaining pumps. They are part of a liquid carbon dioxide cooling system that is meant to dissipate heat as the AMS, which is on the outside of the space station, cycles in and out of sunlight during each 90-minute orbit of Earth.

Only one pump is needed at any given time. One failed in February 2014 and at least one of the other three is showing possible signs of trouble.

Since the 8.5-tonne AMS began operating in 2011, it has tracked more than 69 billion cosmic rays flying through its detectors. Its goal is to search for antimatter and dark matter. In 2013, AMS scientists reported measuring numbers and energies of positrons that hinted at, but did not confirm, the existence of dark matter1.

The experiment’s scientific power depends on how many particles it tracks, so the longer it runs, the more solid the conclusions. “We’ve had some terrific science so far,” says Sistilli. “We really do want to get to 2024 if we can.”

Initially the AMS was supposed to run for only three years. Its original design called for a superconducting magnet that would accomplish the science more quickly, but engineers swapped it with an ordinary magnet months before launch. Tests had shown that the superconducting magnet warmed up more than expected, and the team worried it might consume all of its helium coolant before its three years were up.

Now, cooling systems are again the problem. The pumps, which are in a part of the AMS known as the silicon tracker, are the same ones that were designed to last three years with a superconducting magnet.

The cooling system was built by an international team led by the National Aerospace Laboratory in Amsterdam, the Netherlands. A representative there referred questions to the AMS science group at CERN near Geneva in Switzerland, which is headed by Nobel laureate Samuel Ting of the Massachusetts Institute of Technology in Cambridge.

Ting, who guided the AMS through years of development and setbacks, exhibited little patience for questions about the cooling pumps. “We have four pumps — we only need one,” he says. “We expect to operate for the lifetime of the space station.”

How to fix the problem depends on what it turns out to be. One simple solution could be to upload software that operates the remaining pumps in a different way to allow them to last longer, Sistilli says. Another possibility would be to install a thermal blanket on or near the pumps to control temperatures and reduce their load; other parts of the AMS already have such insulating blankets. A worst-case scenario would involve astronauts doing a spacewalk to replace parts.

It may be six months to a year before the AMS team decides on a solution, Sistilli says.

Meanwhile, a second and smaller dark-matter experiment, the Calorimetric Electron Telescope, arrived at the space station last month. Led by the Japan Aerospace Exploration Agency, it will hunt cosmic rays at energies higher than those in the AMS studies.