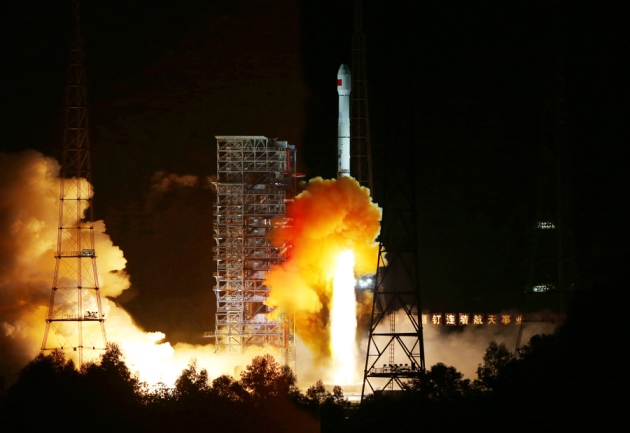 A Long March 3C rocket launched China's Chang'e-5 probe on 23 October into a successful mission around the Moon and back to Earth.

China is on track to overtake the United States in research and development (R&D) spending by the end of the decade,  according to a report on the global state of research spending. Other developing and middle-income countries are also narrowing their gap with the United States, Europe and Japan, the document finds. 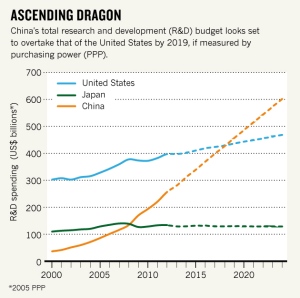 The biennial report, the OECD Science, Technology and Industry Outlook 2014, from the Organisation for Economic Co-operation and Development, was released on 12 November.

Its projection for China's ascendance is earlier than previously forecast, even though the country’s economic growth is slowing. In December 2013, the Battelle Memorial Institute, a non-profit science and technology organization based in Columbus, Ohio, and R&D Magazine predicted in their 2014 Global R&D Funding Forecast that China would not top the charts until around 2022.

“Despite the slowdown, we believe China will surpass the United States in 2020, with the caveat that such predictions are of course not an exact science,” says Dominique Guellec, head of country studies and outlook at the OECD’s Science, Technology and Innovation directorate.

But, he adds, “The quality of Chinese science is still behind the world average, which is reflected by citation indicators and the share of PhDs among researchers”. The country spends much of its R&D budget on building infrastructure, so that less of it goes into actual research than in most other countries, Guellec says. 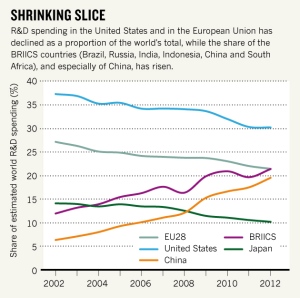 Already China has pulled ahead of the European Union (EU) in the ratio of R&D spending to gross domestic product (GDP), reporting 2% in 2013 against the EU's 1.9% (see 'China tops Europe in R&D intensity').

Although Beijing will probably pursue its commitment to improve that ratio, a number of uncertainties remain, says Richard Suttmeier, an expert on China's science policy at the University of Oregon in Eugene. “It is never entirely clear what the numbers really mean, especially in light of endemic corruption and misconduct.” Moreover, he adds, a severe economic downturn could have considerable impact on corporate R&D, so that current projections on its growth could be off.

The global 2008–09 financial crisis continues to weigh down on innovation across the world. Its impact was “considerable”, and the global economy has not picked up enough to bring innovation back on track, says the OECD report, which includes data for the 34 OECD countries and for 12 non-member countries. (See Nature's coverage of the OECD Science, Technology and Industry Outlook reports from 2010 and 2012.) 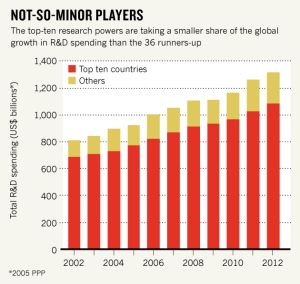 “Immediately after the crisis, governments maintained or stepped up R&D spending in order to spur the recovery, while industry cut back,” Guellec explains. “Now the balance has reversed, with industry boosting investment and governments reducing it in an effort to rein in national deficits.”

Despite budgetary constraints, tax breaks and other government incentives to foster business R&D have risen sharply. The results have mostly been positive, but there is growing tax competition among countries to attract foreign corporate R&D centres. However, tax breaks are not the main factor in multinational investors’ decisions on where to locate their labs, Guellec says, coming “after the quality of the local infrastructure, researchers, universities and labour.”

A shift in sources of public-research funding from agencies to specific projects, with the latter ranging from 25% of the total in Switzerland to 76% in Chile, has also prompted a steady rise in the role of universities in research, according to the report.