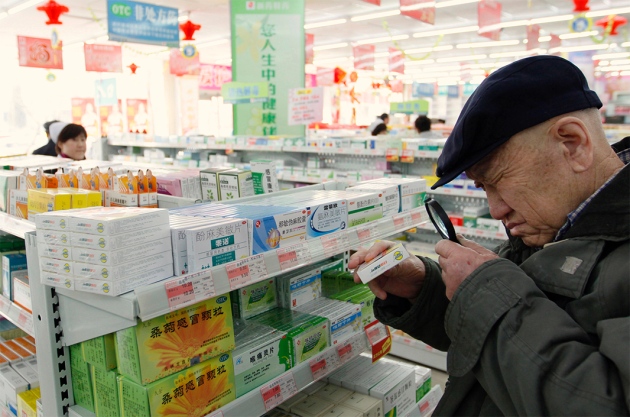 A man examines medicines at a pharmacy in Dandong, China.

Those who submit faked clinical trial data might now go to jail — and in extreme circumstances, be executed — under a new interpretation of China’s criminal code, announced last month.

The policy shift is one of a handful of measures that China is implementing both to speed up its notoriously slow drug-approval process and to keep dangerous and ineffective drugs off the market. This move “is the strongest signal yet, to all the drug developers, clinical-trial managers and principal investigators and physicians, that China is now very serious about clinical data”, says Dan Zhang, executive chairman of Beijing-based Fountain Medical Development, which helps companies to carry out clinical trials and itself stands to be held accountable by the policy change.

A hint of the depth of the problem came after the China Food and Drug Administration (CFDA) in 2015 ordered companies to re-evaluate “the authenticity, integrity and compliance of clinical trial data” in pending applications for new drugs. The agency told them that if CFDA examiners later found violations, the companies would not be able to submit other drugs for approval. More than 80% of the applications were voluntarily withdrawn, according to CFDA documents. One-quarter of the remainder was subsequently rejected because of problems with authenticity.

Manufacturing and selling counterfeit versions of drugs was already a crime, but the submission of fake data in the approval process was unregulated territory, says Su Ling, director of the Institute of Drug Regulatory Science at Shenyang Pharmaceutical University and a venture partner for the investment fund Lilly Asian Ventures. The new policy was approved by a court review committee on 10 April and will go into effect when published by the high court, expected within a few months. It will make those who submit faked clinical-trial data guilty under the same law as counterfeiting.

Under that law, if the approved drug causes health problems, it can result in a 10-year prison term or the death penalty, in the case of severe or fatal consequences. Even if the drug is not approved and even if no one is harmed by an approved drug, those who break the law by submitting fake data may face three years in prison. The new policy also subjects those who submit fake clinical trial data to prosecution under a law that forbids bearing false testimony.

The impact will depend on how the change is implemented, says Su. It still is not clear who among the large number of people involved in a trial would be held responsible for problematic data. Su also wonders how severe a judgment will be. “Will falsified data for one patient break the law, or would it have to be 10 or 100?” The first prosecution will clarify this, he says. “The government might make an example of someone.”

Some doubt that anyone will be executed under the new policy, but others say it could happen. In 2007, China executed the former head of its drug agency for accepting bribes to approve medicines, some of which ended up killing people.

“It’s a remote possibility, but if kids start taking bad vaccines, for example, and they die, I could see a real chance of this happening,” says Zhang.

Liu, however, says that it might be difficult to enforce. “If intent cannot be proven, the crime will not hold. Proving intent is very challenging,” he says.

Critics have long argued that the Chinese pharmaceutical industry is rife with problems. The flurry of application withdrawals last year happened for a variety of reasons, including poor documentation, “untruthful” data and neglect of standard protocols, according to a CFDA official.

Publications from Chinese clinical hospitals tell a similar tale, says John Ioannidis, a researcher in health policy at Stanford University in California. They often fail to document whether trials are double-blinded, whether the study goals are achieved, whether informed consent and ethics approval had been given and whether the test and control groups had been randomly selected to decrease bias. Studies have also found that Chinese trials are much more likely to show a positive effect for a drug, even if the medicine had failed elsewhere. “Most of these problems are the result of people trying to cut corners in order to get papers published in better journals and reap the resulting benefits,” says Ioannidis.

Su says the new policy will scare off many shams, whose applications clog up the approval process, and thus clear the way for valid drugs, which have been slow to get approval. There is typically a wait of four years or more for the CFDA to approve drugs that have already been approved in the United States or Europe.

The CFDA has taken other steps to speed up the regulatory process and make it more rigorous. Between mid-2015 and the end of 2016, it quadrupled the number of staff by adding 450 new regulators, and it expects to add another 300 this year. And beginning in May, the Center for Drug Evaluation will be allowed to approve drugs to start clinical trials without getting a rubber stamp from the CFDA, its parent organization, which adds months to the process.

Su even worries the efforts might “overheat”. People lacking drug development or regulatory experience could approve ineffective or even dangerous drugs, and that could be disastrous, he says.