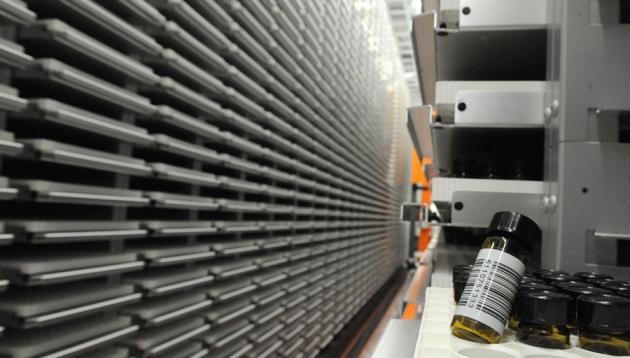 A virtual analogue to the molecule libraries in industrial labs (pictured), the Chemical Abstracts Service contains data on millions of compounds.

The world’s largest scientific society tried to unfairly obstruct a tiny entrepreneurial start-up from competing with its most lucrative scientific information product. That is the main conclusion of a ten-year legal battle that leaves the American Chemical Society (ACS) facing millions of dollars in penalties and sharp questions from some of its members about whether its business practices conflict with its mission to advance the chemical sciences.

The 18 September ruling by the Ohio Supreme Court focuses on the society’s cash cow: the Chemical Abstracts Service (CAS), which offers access to a database of 68 million chemical compounds, indispensable to many chemists the world over. By typing in the name of a chemical or submitting a drawing of its structure, researchers can access reams of data about the molecule’s properties, or a list of academic papers referring to it. According to court documents in the case, CAS makes up about 60% of the society’s gross revenue, amounting to some US$300 million a year. By contrast, membership payments raise only about $12 million (see ‘Chemical cash’). The society, a non-profit organization based in Washington DC, ploughs the cash back into programmes for chemistry education, academic meetings and improvements in chemical-information resources. 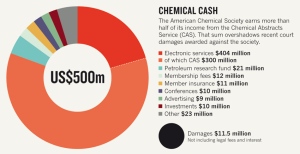 In 2002, the ACS sued Leadscope, a chemical-informatics firm in Columbus, Ohio. The society alleged that the company had infringed ACS intellectual property when the firm obtained a patent on software to display correlations between structural features of chemical compounds and their biological and physical properties.

The ACS argued that Leadscope’s product was based on an aborted project called PathFinder, which two of three Leadscope co-founders had worked on in the 1990s when they were employed by CAS, also based in Columbus. A trial court and an appeals court in Ohio both ruled against the ACS, but the society requested that the case be reviewed by the Ohio Supreme Court. That court has now refuted the society’s allegations, and has instead upheld counterclaims by Leadscope that the ACS filed an “objectively baseless” lawsuit to unfairly quash a competitor.

The ruling means that the ACS will probably have to pay Leadscope $11.5 million in compensation — the amount awarded by the trial court in 2008 and upheld by the appeals court in 2010. However, the ruling clears the ACS of defaming Leadscope, a charge that lower courts had upheld, letting the society off the hook for a further $15 million in damages. The Supreme Court found that, although the ACS did make false public statements about Leadscope infringing its intellectual property, those statements were an accurate summary of allegations already mentioned in court documents and which the public had a legitimate interest in knowing about.

Both the ACS and a lawyer for Leadscope declined to give interviews because the Supreme Court ruling must still be implemented by the original trial court in Franklin County, Ohio. The society has previously said that part or all of the court’s award may be covered by its legal insurance. In a statement responding to the Supreme Court’s verdict, the ACS said that the ruling “will not impact ACS member dues; ACS products, programs or services; ACS staffing levels; or the ability of ACS to achieve its mission”.

But some of the society’s 164,000 or so members, who include chemists from academia, industry and government, are not convinced. “I believe that this lawsuit has brought damage to the society, not only financially, but also reputationally,” says Steven Bachrach, a chemist at Trinity University in San Antonio, Texas, an ACS member who has followed the case. “I’m concerned about the standing of the society in pursuing this aggressively after losing twice.”

Richard Apodaca, an ACS member who is founder of Metamolecular, a chemical-software company in La Jolla, California, says that as a software entrepreneur, he sympathizes with Leadscope. “I was shocked the ACS was being predatory,” he comments. “I felt kind of ashamed to be an ACS member and for the ACS to be doing this.” Court documents state that in 2002, Leadscope lost an important venture-capital deal because the ACS lawsuit scared off the investor, and that a financing deal the company later obtained was on less-favourable terms.

Apodaca says that, like any organization, the ACS has the right to defend its intellectual property, and that it is increasingly common for large software companies to pursue competitors who they believe may have stolen their products. But in this case, the court found that the ACS had no evidence of Leadscope copying source code from any software developed at CAS. Experts from Leadscope and the ACS, who had compared the source codes for Leadscope’s product and PathFinder line-by-line, both testified in court that the products were completely different. The Supreme Court ruling says that although PathFinder and the Leadscope product perform similar functions, the idea of developing such tools could not be considered a trade secret of the ACS.

The court rulings in favour of Leadscope emphasized the actions of Robert Massie, a lawyer and businessman who has been president of CAS since 1992. The court referred to evidence suggesting that before the ACS filed its lawsuit, Massie had been monitoring Leadscope closely and was aware that it was running out of money. Further evidence showed that he had e-mailed the governor of Ohio’s office to try to dissuade him from visiting Leadscope; and that the then-director of information technology for CAS had told Massie that he simply did not know whether Leadscope’s product infringed the ACS’s intellectual property. Massie did not respond to an e-mail from Nature drawing his attention to the court’s remarks and asking for comment.

ACS v. Leadscope is the most recent example of the society’s efforts to protect its intellectual property. In 2005, the ACS accused the US National Institutes of Health of unfair competition in pioneering PubChem, a database linking chemical compounds with their biological activity, although that dispute has never reached court (see Nature 435, 718–719; 2005). In 2004, the society sued Google, claiming that the name (but not the content) of its free Google Scholar service infringed on the ACS’s trademarked SciFinder Scholar software. That case was settled out-of-court in 2006 on confidential terms.

Donald Lewis, a patent lawyer based in San Diego, California, who is a member of the ACS Division of Chemistry and the Law, thinks that the society’s pursuit of Leadscope runs counter to its goal to advance chemistry — something on which the society’s status as a non-profit, non-tax-paying organization depends. By developing a chemical-information product that is useful to researchers, Leadscope was arguably doing its bit to improve chemistry too, Lewis suggests. “In my opinion, the Leadscope case illustrates an instance where the ACS’s business interests were pursued by its professional management to the detriment of the advancement of chemical sciences,” he says. “I’m interested in the soul of the ACS.”

“In my view, this is not a fair representation of our members’ opinions,” Madeleine Jacobs, chief executive of the ACS, wrote in an e-mail to Nature. She declined to comment on the recent court ruling, but emphasized that the society spends its revenues on fulfilling its mission through programmes to improve chemists’ qualifications and the scientific literacy of the public, and by providing “the most accurate, most trusted, and most in-depth chemical information in the world”.