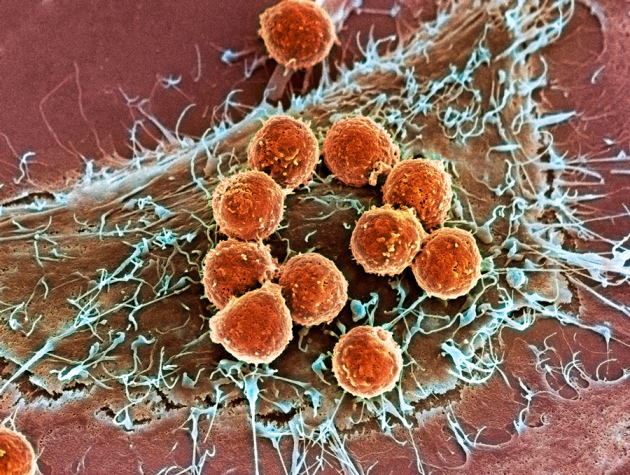 The immune cells (orange) that respond to tumours are more diverse than previously thought.

Detailed maps of the immune cells that surround tumours could suggest fresh therapeutic targets, point out biological markers that can be used to select the patients most likely to respond to a given therapy, and offer insights into the best time to start administering that treatment, according to two studies released on 4 May.

The papers, published in Cell1, 2, reflect a growing appreciation by cancer researchers that a tumour’s response to treatment is often guided by the cells in its neighbourhood — particularly the immune cells that amass at its borders and invade its core.

The make-up of that population could determine the success of immunotherapy treatments, which unleash the immune system to fight cancer. And advances in the ability to characterize those individual cells in unprecedented detail are fuelling a push to catalogue them and learn more about how they dictate the progression of the disease.

“These papers are really important,” says Nick Haining, an immunologist and oncologist at the Dana–Farber Cancer Institute in Boston, Massachusetts. “They put a flag in the ground, saying: here’s the technology that makes it possible, and there’s way more stuff here to learn than you would have thought.”

One team, led by systems biologist Bernd Bodenmiller of the University of Zurich in Switzerland, mapped the immune response to a form of kidney cancer called clear cell renal cell carcinoma2. It focused on two kinds of immune cell, T cells and macrophages. Both can either mount or suppress an immune attack on a tumour, depending on the state that they are in and the proteins they express.

Bodenmiller and his colleagues examined samples from 73 people with kidney cancer along with 5 samples of healthy tissue. They analysed 3.5 million cells for the expression of 29 proteins used to characterize macrophages, and 23 to characterize T cells.

The data show that the current practice of looking at only one or two proteins to infer the state of a T cell or macrophage misses important information, says Kai Wucherpfennig, an immunologist at the Dana–Farber Cancer Institute. “It’s very unlikely that a single marker is sufficient,” he says.

Another study, led by oncologist Miriam Merad of the Icahn School of Medicine at Mount Sinai in New York City, created an atlas of immune cells associated with early-stage lung cancer1. The team compared normal lung tissue and blood with tumour tissue, and found that the young tumours had already begun to alter the immune cells in their neighbourhood.

This is a sign that cancer therapies that target the immune system need not be reserved for advanced stages of the disease, says Merad. “It suggests that already, we could act,” she says. “We don’t have to wait until the tumour has spread.”

Both studies are too small to change cancer treatment on their own. Ultimately, their importance is not in their immediate findings, but in the trend that they could unleash, says Haining. He likens them to the first papers to report the genome sequences of tumours — an effort that generated large, international collaborations and thousands of sequences.

Wucherpfennig notes that Dana–Farber, which already sequences its patients’ tumour genomes, plans to start profiling the immune cells in their tumours as well. The analyses, set to begin in the coming months, will be much simpler than the detailed atlases reported today. But they will reflect growing respect for how an individual’s immune response to a tumour affects their prognosis and should influence the treatment they receive, he says.

Haining expects that attitude to spread over the next few years. “We need hundreds of patients across dozens of tumour types, profiled at the level of thousands of immune cells per sample,” he says. “That’s what we need in order to understand the biology in a way that simply counting heads of this type of immune cell or that type of immune cell didn’t do.”