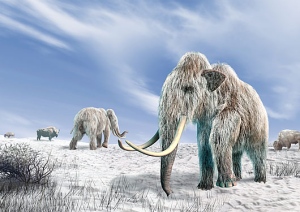 Yesterday brought a flurry of news stories trumpeting a mind-blowing discovery from the lost world of the last ice age: a 10,000-year-old woolly mammoth carcass that preserves muscle tissue the color of fresh meat and blood in liquid form, despite the –10 degrees Celsius temperatures in the Novosibirsk Islands, where Russian researchers discovered the beast.

The Siberian Times obtained striking photos of the specimen showing the reddish tissues and a vial of the dark brown liquid said to be blood that was found in ice cavities under the animal’s belly, as well as additional details of the discovery. The story quotes mammoth researcher Semyon Grigoriev of the North-Eastern Federal University in Yakutsk, who led the recovery of the mammoth, as speculating that the blood contains “a kind of natural anti-freeze” and declaring the specimen — a female that was between 50 and 60 years old when she died — to be “the best preserved mammoth in the history of paleontology.”

An AFP report, meanwhile, referred to the animal as the first old female mammoth ever found and quotes Grigoriev as saying “this find gives us a really good chance of finding live cells,” which would be a windfall for his institution’s project with South Korea’s Sooam Biotech Research Foundation to clone a mammoth.

Wow! I mean, there have been some spectacular mammoths to emerge from this part of the world — the baby mammoth Lubya, discovered in 2007, for example. But muscle tissue like fresh meat? Liquid blood? The possibility of live cells? Sounds amazing, right?

Yet with only the news reports to go on (the find was announced in the popular press rather than in a peer-reviewed scientific journal), I wondered if it might be too good to be true. So I contacted a couple of experts not involved in the discovery to get their read on the development. The upshot: it really does appear to be an incredible find, but some of the claims about it are incorrect as reported or have yet to be established as fact.

Daniel Fisher of the University of Michigan, a leading authority on mammoths who has worked with Grigoriev in the past and considers him a close colleague, comments that the news reports appear to be mostly legit. But he noted via email:

“…a few points have gone astray in the story, perhaps just the usual result of language differences and reporters and scientists getting a little out of sync.” For instance, this is not the first old female mammoth found, just the first time we have found this much of the carcass (i.e., soft tissues) of an old female. Likewise, they have not found any “living cell” — at most they could hope to find what the cloning enthusiasts might call a cell with “viable” DNA, meaning that it would be intact enough to use in the context of a cloning effort. In fact, although there is much talk of “viability” of this sort, I think it remains to be demonstrated that any DNA from a mammoth meets this criterion. In general, ancient DNA is highly fragmented and by no means “ready to go” into the next mammoth embryo.

“As for the blood, I have no doubt that they have something interesting, but what exactly it is … is hard to say at this moment. Whether it is exactly blood, and only blood, will of course require a little more analysis, including some microscopic examination. I have previously seen coagulated blood in mammoth blood vessels, which is very close to what has been reported here, so that much is entirely reasonable. At the moment, I must reserve judgment on the specific nature of this new sample, but I am sure it will be of interest.”

I also reached out to physiologist Kevin Campbell of the University of Manitoba, who, working with colleagues, has used ancient DNA to recreate the red blood cell protein hemoglobin from a woolly mammoth and then observed how that protein functioned. Their efforts, which he and molecular biologist Michael Hofreiter of the University of York, UK, described last year in an article for Scientific American, revealed that the temperature-sensitive protein evolved adaptations that enabled it to perform its job of delivering oxygen to body tissues in the frigid conditions mammoths faced.

Campbell noted via email that “If the fluid (‘blood’) sample is as well preserved as the muscle (which, judging from the pictures seems to be amazingly well), there is the possibility that red blood cells are still intact.” He told me he is interested in studying the substance to evaluate its oxygen-binding properties.

“The first step — from an oxygen-binding study perspective — is to look for red blood cells and then isolate hemoglobin from all the other proteins/cell debris in the sample. Since the sample was collected from outside the body, it is likely that there is also ‘contamination’ from myoglobin and possibly bacteria (for example). Based on the color alone, I think it is pretty safe to say that there is indeed a fair amount of hemoglobin (and possibly myoglobin) in the vials.”

Campbell says Grigoriev told him by email that the “blood” did not even freeze when placed in a museum freezer kept at –17 degrees C. Campbell would like to examine why the substance is not frozen solid at –17 degrees C, noting that he was initially very skeptical about the claim that the supposed blood contains so-called cryoprotectants that have maintained it in a fluid state. He writes:

“Given that the sample is still fluid at –17C indicates that it is in a ‘supercooled’ state, as we expect blood and other body fluids to freeze at about –0.6C. Many insects (and some vertebrates) are able to avoid freezing at far colder temperatures via the expression of antifreeze peptides/glycoproteins and (largely carbohydrate based) cryoprotectants, which can dramatically lower the supercooling point (roughly equivalent with the freezing point).

“If mammoth blood had this trait, they would be the only known mammalian example of this to my knowledge (however, the abdomens of arctic ground squirrels have been shown to supercool down to –2.9C, though the mechanism allowing this ability is still unknown [I think]). At any rate, I highly (very highly) doubt that circulating mammoth blood was able to supercool to –17C — though it is worth testing the samples to see why they are still ‘fluid’.

“For instance, maybe they did have some sort of cryoprotectant (arctic ground squirrels certainly seem to), and this became concentrated during the long period of preservation. Conversely, maybe they had absolutely no ‘antifreezes’ and instead most of the water in the sample was taken up by the surrounding ice, such that the remaining ‘blood’ became extremely concentrated — which would lower its freezing point. Alternatively, perhaps the sample was contaminated by ice-living bacteria which secreted cryoprotectants, or maybe there is some other explanation?

“Another question is, how were these samples preserved in this state for so long? Also, why, given the many recent mammoth finds, is this the only one (that I know of) with ‘fluid’ blood? Regardless, this — on balance — appears to be a remarkable finding [if of course it is true — and I have no way to assess that at this point] and something worth pursuing.”

Both Campbell and Fisher are now in discussions with Grigoriev about studying the new specimen. From the sound of things, these remains may well revolutionize scientists’ understanding of mammoth physiology, which would be thrilling indeed. As for resurrecting this long-vanished creature, well, let’s hope it doesn’t come to that. As my colleagues and I argue in the June issue of Scientific American, de-extinction is a bad idea.