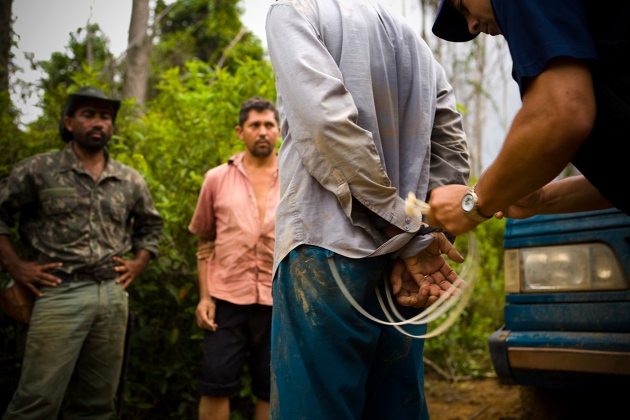 Despite Brazil’s efforts to safeguard the Amazon rainforest by establishing protected areas and boosting law enforcement, illegal use of the region’s natural resources is still widespread, according to a study1 published on 10 October in PeerJ.

The researchers looked at 4,243 law-enforcement records from between 2010 and 2015, across 118 federally protected areas of the Brazilian Amazon. Although the overall number of citations decreased over those five years, illegal activities still occurred in nearly every protected area. The analysis highlighted the need for improved monitoring and enforcement, says study co-author Érico Kauano, a conservation biologist at the Chico Mendes Institute for Biodiversity Conservation (ICMBio), the Brazilian agency responsible for the management of the federal protected areas.

Kauano and his colleagues grouped illegal activities into ten categories, and found that 37% of the infractions fell into the “suppression and degradation of vegetation” group, which included deforestation, logging of endangered tree species and the unauthorized use of fire. Illegal fishing was the next most common citation at 27%, followed by hunting at 18%. Most of the illegal activity occured in more accessible and densely populated areas.

Roads have a major role in opening up the tropics to colonization and exploitation2. Deforestation of the Brazilian Amazon increased after the construction of the Belém–Brasília Highway in the 1960s, and continued with the opening of the Trans-Amazonian Highway in 1970s. A 2014 study2 using satellite images found that around 95% of the deforestation in Brazil’s Amazon occurred within 5.5 kilometres of a road and within 1 kilometre of a navigable river.

Caught in the act

The availability and use of government data are what sets this study apart from others, says Emilio Bruna, a tropical ecologist at the University of Florida in Gainesville, who was not involved in the study. Past studies, including a paper3 published last month in Biotropica (where Bruna is editor-in-chief), struggled to obtain even the most basic information, such as how many staff members were employed by the agency that manages protected areas, and how much they were paid, Bruna says.

Data from efforts on the ground are important because, although remote-sensing instruments such as satellites can detect deforestation, for example, they fail to identify threats present beneath the forest canopy. Law-enforcement records, when available, can complement remote-sensing data sets, the study authors say.

“You can actually tell what it is they’re writing infractions for, and that’s valuable,” says Bruna. But he points out that, without knowing where law-enforcement efforts are being allocated, it’s only a partial picture. “It could be that the reason certain protected areas have the most infractions is because those are the places that are under the greatest threat,” he says. “Or it could be because that’s where the greatest enforcement is being focused.”

“We are still far from having adequate staff in the protected areas,” Kauano says. In 2014, a local news outlet reported that the Brazilian Institute of Environment and Renewable Natural Resources had only 47 agents to monitor environmental crimes in Amazonas, the country’s largest state in the Amazon region, which covers an area of about 1.6 million square kilometres.

Hiring more enforcement officials looks unlikely in the short term, however, owing to Brazil’s ongoing political and economic crisis, says Kauano. “What ICMBio seeks to do to overcome this is to prioritize some regions with greater problems.”

Bruna cautions against jumping to conclusions from the study’s results, however. “Not all infractions are created equal,” he says. It’s important to differentiate between a resident fishing out of season and a fishing charter operator. Bruna worries that some may look at this study and think that the people living near protected areas are the problem. But they aren’t the only ones breaking the law, he says. And the demand for the fruits of this illegal labour comes from all over the world.

Local people can, in fact, be part of the solution. There is some evidence that people living in or near protected areas are helping with conservation, says Kauano. But he adds that the government needs to make a greater effort to work with local communities.