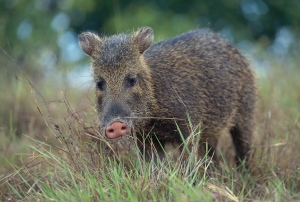 White-lipped peccaries are extinct in the Atlantic forest regions surveyed.

Mammal extinctions in Brazil's Atlantic forests are occurring at least twice as fast as estimates suggested, according to the latest survey of the region.

Jaguars, lowland tapirs, woolly spider-monkeys and giant anteaters are almost absent in Brazilian northeastern forests, which are among the most ancient and threatened tropical ecosystems on the planet. And the white-lipped peccary, a species closely related to pigs, has been completely wiped out there, the assessment shows.

The study, by a team of ecologists based in Brazil and the United Kingdom, focused on populations of 18 mammal species in 196 forest fragments, within an area of more than 250,000 square kilometres.

The researchers estimated the population density of the mammals from before European colonists arrived roughly 500 years ago, by assuming that all 18 species were found throughout the forests' original area. They then compared the findings of their survey to these estimates.

The results1 suggest that out of 3528 populations estimated to have originally lived in the area, only 767 (21.7%) of those remain today. Only three species (two small monkeys and one armadillo) are still present across the region.

Previous modelling studies conducted in the 1960s were far more optimistic2. Those early models predicted no threat to between 47% and 83% of all mammal populations in the northeastern forests, assuming that the forest fragments stayed the same size.

Bigger but no better

According to Gustavo Canale, a zoologist at the State University of Mato Grosso (UNEMAT) in Tangará da Serra, who led the study, even big forest patches are in fact largely empty of mammals — a proxy for the general health of the ecosystem. “Trying to predict the presence of those species only by looking at the size of the forest fragment doesn’t work for the northeastern Atlantic forest,” Canale explains.

The Atlantic forest once stretched from the north of Brazil down to Argentina, and almost as far west as the Amazon rainforest. It is home to several species that are found nowhere else. During the past five centuries, ranches, sugarcane plantations, logging and hunting have destroyed nearly 90% of the forest, which now exists in fragmented plots of degraded cover. Just 1% of its original area remains in Argentina.

Estimates of earlier mammal populations were based on the relationship between forest area and its capacity to support various species, which depends on food availability, for example. But those studies failed to account for the synergistic effects of habitat loss, fires, urban expansion and hunting on the fragmented forests. Even species populations that would otherwise survive in a fragmented forest end up disappearing as a result of those multiple hits, Canale explains.

Canale and his co-authors spent two years driving along dirt roads in three Brazilian states to interview local people about the presence of large mammals. “In most places, jaguars, tapirs, woolly spider-monkeys and white-lipped peccaries weren’t even in living memory,” Canale says.

Mammal populations did better in official protected areas, such as national parks, where forest fragments are large and hunting is forbidden. But those in forest patches on private properties, which landowners are obliged to keep in compliance with the Brazilian Forest Code, did not fare any better than would have been expected had forest fragments of the same size lacked such protection. In other words, private land owners in northeastern Brazil are turning a blind eye to hunting - or shooting animals themselves.

“What we need is for large protected areas to be surrounded by landscapes that allow for gene flows. And that would only work if legal reservations and riparian forests are protected in practice,” says Jean Paul Metzger, an ecologist at the University of São Paulo, who was not involved in the study.

The Forest Code was changed by Brazil's Congress in April, after years of pressure from the powerful agricultural lobby to weaken forest protection. The bill was partially vetoed by President Dilma Rousseff, but went back to Congress, where the agricultural caucus has been trying to further cut down its provisions for safeguarding forested land near rivers. A final vote is expected by the end of August.

“The new bill doesn’t explicitly stimulate deforestation, but it doesn’t impose forest restoration either,” says Metzger. “That means protected areas are likely to remain isolated, which in turn may mean more extinctions in the future.”