Borophene is a honeycomb of boron atoms (purple), with each hexagon capped by another boron atom. It forms atom-thin films on a silver substrate (silver). Reprinted with permission from Mannix, A. J. et al. Science 350 1513–1516 (2015).

Meet flatland’s latest resident: borophene, a sheet of boron just one atom thick. It joins a family of two-dimensional materials that has been flourishing ever since graphene, the granddaddy of them all, took the world by storm in 2004.

Graphene’s honeycomb arrangement of carbon atoms lends it strength, flexibility and superb electrical conductivity. Borophene’s boron atoms share the same arrangement, but with an extra boron atom cherried on top of each tessellated hexagon. And although borophene has not yet been isolated as a free-standing sheet, there are already tantalizing hints that some of borophene’s properties could surpass those of its flat cousins.

“Borophene is just beginning to be studied,” says Mark Hersam, a materials scientist at Northwestern University in Evanston, Illinois, and part of the team that unveiled the material in Science on 17 December1. “It’s good to get it out there so the field as a whole can take it on — there’s so much to be done with it.”

The super materials that could trump graphene

Hersam and his colleagues grew borophene on silver, by evaporating boron atoms from a solid boron rod at temperatures of 450ºC to 700ºC inside an ultrahigh-vacuum chamber. Whereas boron itself is a poor electrical conductor, the team found that borophene is fully metallic. Unprotected samples oxidized in a few hours, but a silicon covering kept them stable for several weeks.

“I was delighted to see this result,” says Deji Akinwande, a nanomaterials researcher at the University of Texas at Austin. “It’s quite different from other 2D materials, which are mostly semiconductors.”

Images under a scanning tunnelling microscope revealed that borophene could take different forms, depending on the temperature used to make it and on how the atoms of boron sat on the silver below. One looked smooth, while the other appeared stripy, with corrugations like the ridges and furrows of a ploughed field. 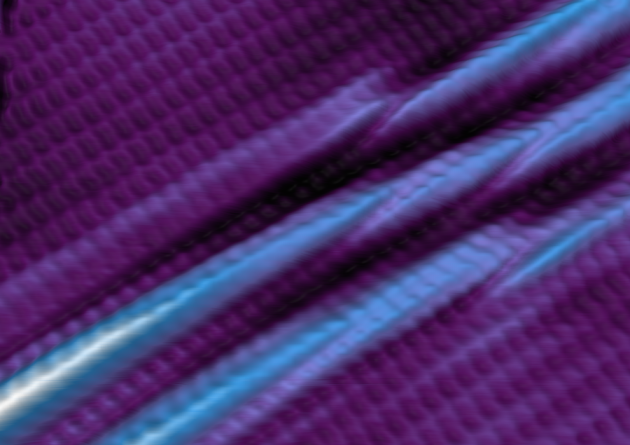 A view of borophene under a scanning tunnelling microscope, showing corrugations which are due to the silver layer beneath.

Calculations suggest that corrugated borophene conducts electricity much better along these ridges than across them; it could even be stiffer and more conductive in this direction than is graphene. Hersam’s team is now trying to measure these qualities experimentally, and he says that their directionality could give borophene an advantage in certain applications, such as a switchable filter for polarized light.

“The next fundamental challenge is to demonstrate a free-standing sheet of this material,” says Akinwande. “That really opens up the science and engineering opportunities.”

Transferring free-standing borophene to an insulating substrate would allow researchers to accurately measure its conductivity, for example. But that’s far from trivial: “Boron reacts with almost everything around it,” says Hermann Sachdev, an inorganic chemist at the Technical University of Kaiserslautern in Germany.

Boron's reactivity may turn out to be an advantage, however, because borophene could be readily modified with other chemical groups or sandwiched between other materials to fine-tune its properties. Boron and many of its compounds are also extremely hard, so if borophene’s chemical exuberance can be controlled it might be easier to handle than more fragile flatlanders such as silicene or germanene (2D sheets of silicon and germanium, respectively). “I expect folks working on silicene may pivot to this,” says Hersam.

Back in February, Akinwande made the first silicene transistor2, and says that he would like to study borophene as well, if he can get the funding. Measurements by Hersam’s team suggest that borophene has a higher electron density than graphene, and Akinwande says that this raises the possibility that cooled borophene could act as a superconductor, carrying electrical charge with no resistance.

Borophene may even point the way to the next 2D material. Aluminium is immediately below boron in the periodic table, and a theoretical study has predicted that it could form atom-thin honeycomb sheets of aluminene3. If that material could be created in the lab, says Akinwande, its conductivity might overshadow both graphene's and borophene's.