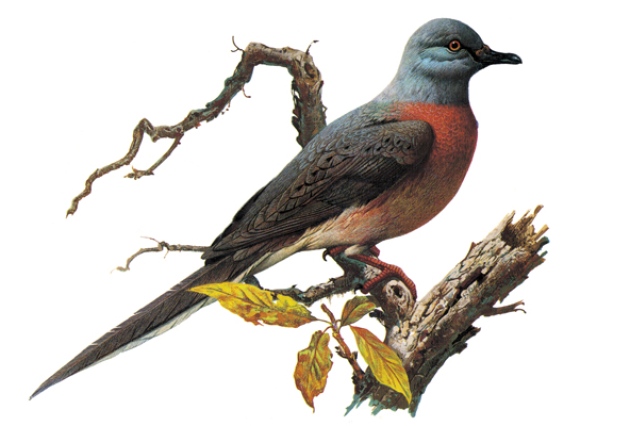 The passenger pigeon was once the most numerous bird species in North America, with a population that at one point was estimated to have reached 3 billion.

John James Audubon knew birds. As part of what he called his 'frenzy' for avians, the French-American naturalist attempted to survey and document in drawings all the native bird species of North America. And it is Audubon who in 1833 identified the passenger pigeon, Ectopistes migratorius, as the most numerous bird on the continent, highlighting the point by describing a mile-wide flock of migrating pigeons that passed over his head and blocked the sun for three straight days.

In fact, the passenger pigeon in the early 1800s may have been the most numerous bird in the world, with an estimated population of at least three billion birds — or at least a third as much as the total population of all kinds of birds in North America today. Yet, by 1900, none survived in the wild, and on 1 September 1914, the very last one, named Martha, was found dead on the floor of her cage in the Cincinnati Zoo in Ohio. The species had gone from extraordinarily populous to extinct in a human life span.

Now an analysis of genes pulled from toe pads of stuffed museum specimens suggests that a tendency for boom-and-bust cycles might have been written into the passenger pigeon's DNA and contributed to the species’s downfall. "The passenger pigeon was likely to experience dramatic population fluctuations," explains molecular ecologist Hung Chih-Ming, a postdoctoral associate at National Taiwan Normal University and lead author of the analysis published in Proceedings of the National Academy of Sciences1 on 16 June. And, it was “not always superabundant,” says Hung, who began studying the birds at the University of Minnesota in the lab of avian evolutionary biologist Robert Zink.

Back in 2011 Hung and his co-authors were chatting over the dinner table in Minnesota. The conversation turned to "how evil humans can be to wildlife," Hung recalls. "The passenger pigeon was once the most abundant bird in the world and suddenly it disappeared totally from the Earth." Could hunting alone have brought down the passenger pigeon? And what would genetics reveal about the population size of the bird that seemed innumerable to early European settlers?

So Hung and his colleagues gathered four museum specimens of E. migratorius bagged in Indiana, Minnesota and Pennsylvania — three brightly colored males and one drab female. The three males' toe pads yielded long stretches of the passenger pigeon genome (although the female toe pad proved a bust). They then compared genetic sequences with the genome of the still common domestic pigeon (Columba livia) and, based on those comparisons, estimate they captured between 57 and 75% of the passenger pigeon's genetics (assuming that its genome was roughly the same size as its relative's). "To our knowledge this is the longest genome sequence with the highest quality ever obtained for an extinct avian species," Hung and his colleagues wrote of the achievement.

With such long stretches of DNA, Hung and his team could assess the extent to which the sequences of DNA code in the genes in the three specimens varied from bird to bird. With this map of genetic variation in hand, the scientists could then estimate how big the population of passenger pigeons once was — typically, a small population will have less genetic variation than a larger one because it derives from a smaller pool of ancestors who bred successfully. Through this technique of looking at many genes on a single genome for variations, a smattering of birds from across the breeding range can reveal the approximate number of their peers.

In the case of the passenger pigeon, Hung and his colleagues concluded that the population of breeding birds was roughly 330,000 on average, falling to as few as 50,000 birds at points in the last million years. This mismatch between these numbers and 1880 estimates of at least three billion suggests that the passenger pigeon may have been what is known to ecologists as an 'outbreak' species, like locusts, that boom and bust with changes in conditions, rather than a species that experiences a singular population explosion, as Homo sapiens has in the last 200 years.

This answer from genetics matches up well with ecological modelling of the abundance of passenger pigeon food — acorns, beechnuts and other forest mast — in North America over the last few thousand years. Such computer simulations suggest a population crash for passenger pigeons some 21,000 years ago as glaciers buried the trees that gave them food, followed by a rebound around 6,000 years ago to as many as 1.6 billion birds.

This boom-and-bust scenario also lines up well with arguments by some that human immigration from Europe may have artificially swelled the ranks of the passenger pigeon by eliminating their Native American hunters and foragers, who competed with the birds for nuts and other forest foods. This population growth, the story goes, would have been temporary, because large flocks would have damaged the forests that provided food to the pigeons. "I suspected that the huge flocks of passenger pigeons that were observed when Europeans first arrived in North America were something ephemeral," notes paleogenomicist Beth Shapiro of the University of California, Santa Cruz, who was not involved in this work but is also working on sequencing the passenger pigeon genome. "It is hard to imagine how these birds could sustain such enormous populations over the long term. They were so incredibly destructive to the forests!"

After all, the massive flocks were like a biological storm, cracking trees under the weight of birds and covering the ground in excrement, among other impacts. European settlers exacerbated this arboreal destruction, clearing the great US eastern forest over the course of the 19th century. This downward trend in the abundance of forest mast paired with increased hunting by these same humans may then have combined to trigger the passenger pigeon's rapid extinction. "I think the reduction of habitat definitely decreased their population size," Hung says, noting something similar may explain the extinction of other outbreak species in North America, like the Rocky Mountain grasshopper in the western US. "Our study suggests that the combination of natural population size changes and human disturbances drove the rapid extinction of this bird."

Is a return possible?

But the fact that passenger pigeons persisted at relatively small population sizes gives fresh hope to efforts to bring them back — so-called de-extinction. "Perhaps we don't need to create billions of them in order for their populations to be sustainable," Shapiro notes, given that the bird survived in relatively small numbers during periods when ice reigned.

Would-be de-extinction scientist Ben Novak is leading that charge via the Long Now Foundation's Revive & Restore project in conjunction with Shapiro's lab. Novak — who is unconvinced that any natural processes played a part in the bird’s demise — predicts that, if the de-extinction effort is successful, "the passenger pigeon of the future will adapt to our forests as it adapted to the changing forests of the past." In other words, the passenger pigeon will not become a pest as an outbreak species, constrained by the supplies of acorns and other mast as in its evolutionary past.

Of course, there are other food sources available today that were not as abundant in the 19th century, including widespread cropland in Minnesota, Indiana and elsewhere the passenger pigeon once roosted. Is there a place in the US — outside of national parks and forests perhaps — for huge flocks of this bird to roam free anew? And what would prevent farmers from poisoning (or hunting) the birds to extinction again if huge flocks destroyed crops? De-extinction of the passenger pigeon will not be an easy job, either from a social or a genetic perspective, Hung notes. "It is interesting, but I personally do not think it is a worthy step to take for conservation."

Regardless, the genetic sleuthing in the case of the missing passenger pigeon gives hope that waiting in museum drawers lies a rich repository of genetic information about species both extinct and living, and all of it accessible from small samples like a toe pad. At the same time, for genetic resurrection to work in the case of the passenger pigeon, the great eastern forest would have to return even more fully, too. Audubon, for one, thought that the only thing that could threaten the passenger pigeon was the disappearance of its forest home, which happened even faster than the ardent naturalist could foresee. Paired with the hunting that Audubon himself practiced — only it was market hunters empowered by the advent of the telegraph and railroads — the two forces conspired to deliver the fatal blow.