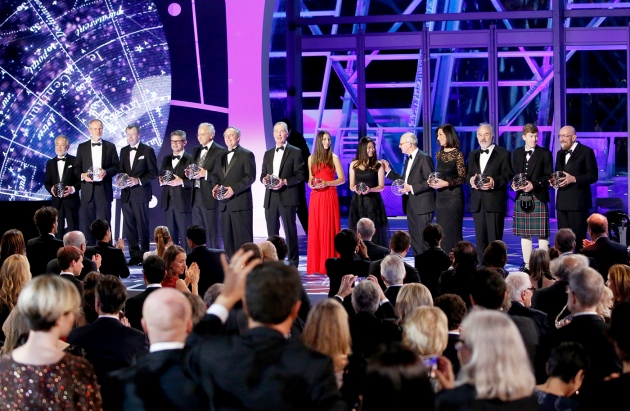 The winners of the 2016 Breakthrough Prizes pose on stage with their awards during the ceremony in Mountain View, California.

Posing problems in science can be just as rewarding as solving them. The discovery of the black-hole firewall paradox — one of the most confounding puzzles to emerge in physics in recent years — has bagged its co-founder a share of one of this year’s US$3-million Breakthrough Prizes, the most lucrative awards in science.

Joseph Polchinski, at the University of California, Santa Barbara, is one of three string theorists to share the fundamental-physics prize — announced along with the life-sciences and mathematics awards on 4 December at a glitzy ceremony at NASA’s Ames Research Center in Mountain View, California.

Polchinski co-authored an analysis in 2012 that concluded that either black holes are surrounded by a ring of high-energy particles known as a firewall — a possibility that contradicts the general theory of relativity — or physicists’ understanding of quantum theory is wrong1. As yet, there is no consensus as to which of these two cornerstones of physics has to give.

“I made a list of about 11 distinct solutions proposed by some of the biggest names in physics, but none are quite convincing, and none are clearly wrong,” says Polchinski. “I’m completely mystified.” 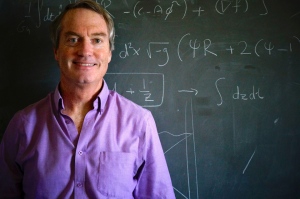 Andrew Strominger and Cumrun Vafa, both at Harvard University in Cambridge, Massachusetts, share the physics prize with Polchinski. All three have examined black-hole physics from the perspective of string theory, which posits that at the fundamental level, elementary particles are made up of strings that are anchored to higher-dimensional membranes, or ‘branes’.

The Breakthrough physics prizes have previously been criticized for honouring string theorists because string theory lies beyond the reach of direct experimental testability. But the prize’s founder, Russian billionaire Yuri Milner, argues that this helps to set the prize apart from awards such as the Nobels, which require ideas to be backed up by experiments. “The physics prizes are really recognizing intellectual achievement,” he says. In this case of firewalls, he adds, “this can be in the asking of a question, rather than the finding of an answer”.

This May, the Breakthrough prizes cemented another distinction from the Nobels by announcing a special collective prize to 1,015 people working on the LIGO project. In February, researchers working at LIGO announced the first detection of gravitational waves, ripples in the fabric of space-time created when two black holes merge. The Nobel prizes honour at most three people in their science categories.

The three LIGO project leaders — physicists Ronald Drever and Kip Thorne at the California Institute of Technology in Pasadena, and Rainer Weiss of the Massachusetts Institute of Technology in Cambridge — will share $1 million; the remaining $2 million will be distributed among the other 1,012 physicists who worked on the project. This continues a trend set last year, when 1,377 neutrino physicists split the mega-prize. “The physics prize selection committee want to send a clear message here that experimental physics is collaborative,” Milner says.

Harry Noller, a molecular biologist at the University of California, Santa Cruz, was honoured with a life-sciences prize for his research revealing the centrality of RNA to protein synthesis. Some argue that he missed out on winning the 2009 Nobel Prize in Chemistry because of the award’s limitation to three winners. And this year’s Nobel laureate for physiology or medicine, Yoshinori Ohsumi at the Tokyo Institute of Technology, in Japan, also picked up a Breakthrough gong for his work on autophagy, cells’ recycling system.

The other life-sciences winners were: geneticist Stephen Elledge at Harvard Medical School in Boston, Massachusetts, for elucidating how cells sense and respond to DNA damage; developmental biologist Roeland Nusse at Stanford University in California for pioneering research into the Wnt signalling pathway, which transmits signals from outside to inside cells; and geneticist Huda Zoghbi at Baylor College of Medicine in Houston, Texas, for discovering the causes of the neurological disordersspinocerebellar ataxia and Rett syndrome.

The Breakthrough prize in mathematics went to Jean Bourgain at the Institute for Advanced Study in Princeton, New Jersey, for work on the geometry of multidimensional spaces and techniques for solving partial differential equations, with applications to quantum physics, and other research. Bourgain also won the $1-million Shaw Prize in mathematics in 2010.