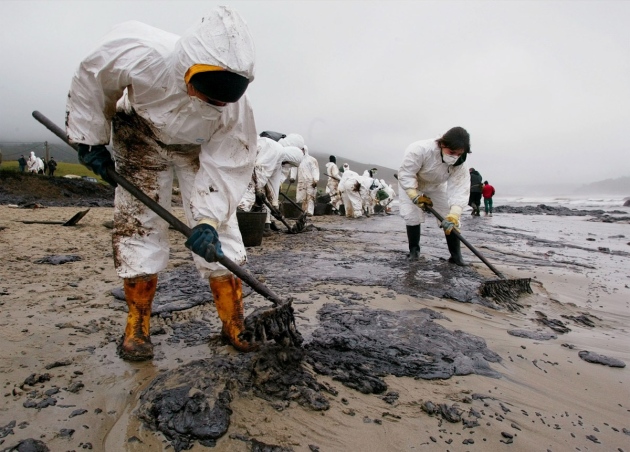 Oil spills kill a lot of wildlife quickly, but their long-term effects are hard to establish because to compare the situation before and after a disaster, a study would need to have been already up and running before the disaster occurred. Fortunately, this was precisely the case for a Spanish team of researchers.

Back in 1994, marine biologist Álvaro Barros and his colleagues at Spain's University of Vigo started looking at the reproductive activity of 18 colonies of a diving bird known as the European shag (Phalacrocorax aristotelis). Then, on 13 November 2002, the hull of the Prestige oil tanker broke in half off the north-western coast of Spain, releasing 63,000 tonnes of oil. The oil heavily coated regions near seven of the colonies, and mostly missed the other 11, creating ‘oiled’ and ‘unoiled’ populations for the researchers to compare.

The team now reports in Biology Letters1 that reproductive success was 45% lower in oiled populations compared with unoiled colonies, whereas it had been much the same before the spill. The researchers measured reproductive success by counting how many fully grown young emerged from each nest. This number averaged 1.6 for both oiled and control colonies before the spill. Afterwards, while the control colonies maintained the 1.6 figure, the number for the birds in the oiled colonies dropped to 1.0.

“We just don’t have much information on long-term oil-spill effects. That this team was able to compare colonies like this over so many years makes the findings very valuable,” explains ecologist David Grémillet at the CNRS Centre for Functional and Evolutionary Ecology in Montpellier, France.

Barros and his team did not investigate why reproductive success was so much lower in the oiled colonies, but speculate from their knowledge of other studies that it resulted from wider ecological damage. “It looks like many of the shags’ preferred prey were wiped out, and that a lot of oil pollutants got incorporated into the ecosystem. This would certainly harm their ability to reproduce,” Barros explains.