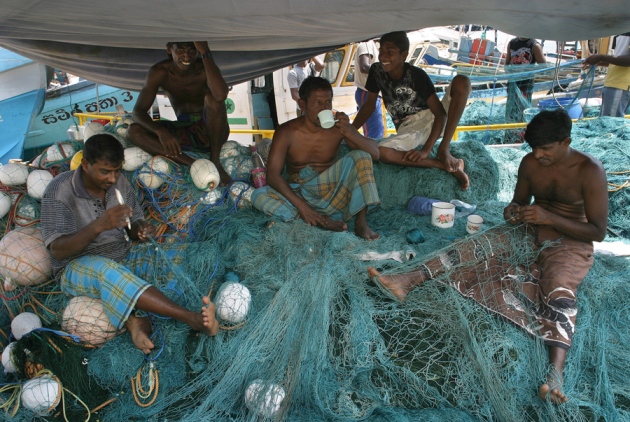 Larger groups may find it easier to improve their collective skills at tasks such as making fishing nets. Pictured are fishermen on the South coast of Sri Lanka.

Humanity's success depends on the ability of humans to copy, and build on, the works of their predecessors. Over time, human society has accumulated technologies, skills and knowledge beyond the scope of any single individual.

Now, two teams of scientists have independently shown that the strength of this cumulative culture depends on the size and interconnectedness of social groups. Through laboratory experiments, they showed that complex cultural traditions — from making fishing nets to tying knots — last longer and improve faster at the hands of larger, more sociable groups. This helps to explain why some groups, such as Tasmanian aboriginals, lost many valuable skills and technologies as their populations shrank.

“For producing fancy tools and complexity, it’s better to be social than smart,” says psychologist Joe Henrich of the University of British Columbia in Vancouver, Canada, the lead author of one of the two studies, published today in Proceedings of the Royal Society B1. “And things that make us social are going to make us seem smarter.”

“There were some theoretical models to explain these phenomena but no one had done experiments,” says evolutionary biologist Maxime Derex of the University of Montpellier, France, who led the other study, published online today in Nature2.

Derex’s team asked 366 male students to play a virtual game in which they gained points — and eventually money — by building either an arrowhead or a fishing net. The nets offered greater rewards, but were also harder to make. The students watched video demonstrations of the two tasks in groups of 2, 4, 8 or 16, before attempting the tasks individually. Their arrows and nets were tested in simulations and scored. After each trial, they could see how other group members fared, and watch a step-by-step procedure for any one of the designs.

After 15 trials, the larger groups were more likely to still be making nets as well as arrows. They had also maintained the quality of the original net design, while improving on the arrows. In smaller groups, however, the arrows never improved, and the nets became simpler over time. When most players tried to copy the tools, they ended up with less effective versions, but larger groups were more likely to contain skilled artisans who equalled or improved on the initial designs. They provided templates for their teammates to duplicate, and boosted the group’s overall performance.

In their study1, Henrich and his collaborators asked 200 students to either recreate an on-screen image using complex editing software, or to tie a series of rock-climbing knots. The students played the games in successive ‘generations’, and could see detailed instructions from either one or five of their predecessors.

After ten generations, students who had access to five models were substantially better at editing the images and tying the knots than those with just one model. Even the least skilled of them performed better than the most skilled person in the one-model group.

Henrich's team found that the students paid most attention to the most capable of their five possible mentors, but also drew inspiration from the others. “This indicates that the advantage of a larger group is that participants can copy several individuals, blending their knowledge to achieve better results,” says Lewis Dean, a primatologist at the University of St Andrews, UK, who was not involved with either study.

“Innovations like literacy, writing and mail allowed us to access the thoughts of people in distant places and times,” says Henrich. “Extend that to the Internet, and things should only speed along even more.”

The two studies also suggest that a large population size may be necessary for the evolution of cumulatively complex cultures, of the sort that distinguishes modern humans from other primates.

For example, Henrich notes that many anthropologists assumed that Neanderthals were less intelligent than humans even though their brains were the same size, because they built less complex tools. “Another possibility is that they lived in scattered groups without much interconnectedness,” he says. They lacked the large groups that ratchet culture to new heights.

But Dean notes that human culture is more sophisticated than these experiments allow. We help one another with complex tasks, teach each other and provide feedback. “I think the experiments risk underestimating what all groups, including small ones, can achieve,” he says.