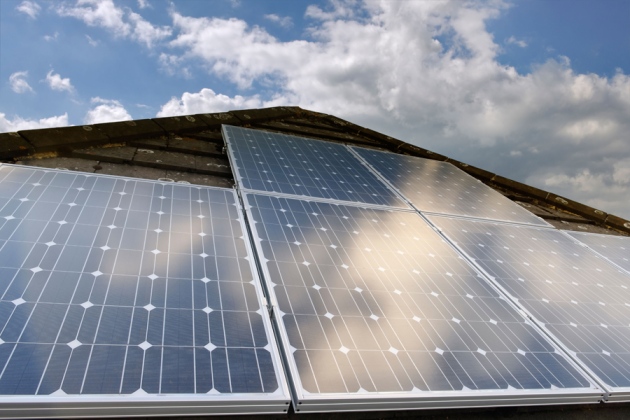 A common chemical used as a bath salt and in the making of tofu can replace a toxic, expensive chemical in the manufacture of high-tech solar cells, chemists announced today1. Although not all experts agree, the authors of the study say that their surprising discovery could make cadmium-telluride cells — a breed of ultra-thin photovoltaics that have only a 5% share of the world solar market — not only safer to make but also substantially cheaper.

Most commercial photovoltaic modules are based on wafers of ultra-pure silicon; these absorb sunlight, which gives a kick to the material's electrons, allowing them to move around the cell and generate current. Another approach is to build the cell from thin films of materials that absorb light more strongly, and so don't need to be pure and can be deposited quickly. These films are around 1 micrometre thick — barely one-hundredth of the thickness of a silicon wafer — so they use less material than conventional cells and can potentially be made with flexible backings such as plastic or foil, rather than rigid glass.

When they were first proposed, thin-film cells — and in particular those based on cadmium telluride (CdTe) — promised to be cheaper than silicon and only slightly less efficient. But in 2009 the price of silicon modules from China plummeted, driving most thin-film manufacturers (as well as many conventional silicon firms) out of business. Nowadays, “CdTe is running a very tight race with crystalline silicon in terms of cost per watt”, says Jenny Chase, a solar analyst at Bloomberg New Energy Finance in Zurich, Switzerland. “It will need to sell much cheaper to compensate for the lower efficiency,” she adds.

Jon Major briefs Richard Van Noorden on the advantages of his team's invention.

Cut out the cadmium

One of the problems with CdTe, says Jon Major, a physicist at the University of Liverpool, UK, is that the cell must be coated with a solution of cadmium chloride (CdCl2) to boost its efficiency. Among other benefits, chloride ions dissolve into the CdTe layer and set up a semiconductor junction that makes it possible for electrons to flow easily across the device. But the chemical is “horrendous” because its cadmium ions are soluble in water, says Major. “It’s toxic, possibly carcinogenic, causes long-lasting damage to aquatic life — and is very expensive.” Chemists must take costly precautions, including wearing protective suits and filtering dissolved cadmium out of a lab or factory’s waste. (The cadmium in the CdTe layer is not soluble, so the finished modules do not pose a health hazard, says Major.)

Major and some colleagues at Liverpool searched through the periodic table to find elements that bond with chlorine to make cheaper, safer powders. They tried several different salts — including table salt, or sodium chloride — but these failed because ions such as sodium fouled up the device’s electronic structure. At last, they hit on magnesium chloride (MgCl2), a commonly found chemical that produced a cell almost as efficient as CdCl2. The researchers think the salt works because magnesium ions have a double positive charge, just like cadmium ions, so they do not disrupt the electron flow. 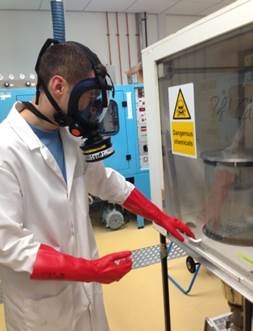 “We’re getting cells as good as anything we’ve ever made with cadmium chloride,” says Major. “And we can use the salt on an open lab bench, with a cheap spray coater bought online.” MgCl2 is so safe that it is used in cooking (known in Japan as nigari) to coagulate soya milk and make tofu. It is also used as a bath salt and as de-icing grit on wintry roads. It costs around US$1 per kilogram — whereas CdCl2 costs 300 times more.

From lab to factory

Kurt Barth, an engineer at Colorado State University in Fort Collins who founded CdTe firm Abound Solar — which filed for bankruptcy in 2012 — says that CdCl2 was one of the costliest parts of the cell. “We are trying out the MgCl2 in our lab today and if we are successful we will adopt it in all our processes,” he says. But neither Barth nor Major say that they can quantify expected savings.

The biggest firm in the business, First Solar in Tempe, Arizona, is less impressed. Environmental, health and safety controls are expensive, but “the CdCl2 treatment step is not a major cost driver in our manufacturing process”, said the company’s chief technology officer, Raffi Garabedian, in a brief statement.

Michael Bauer, chief technology officer at Calyxo, a CdTe firm in Bitterfeld-Wolfen, Germany, was similarly sceptical. “The impact on the costs side will be limited,” he says.

The Liverpool team does not want to set up its own company, but has tried to file a patent for the discovery — only to find that First Solar had, last May, filed an application for a separate patent that happened to mention MgCl2. “They listed every chloride they could think of in the patent,” says Major, who adds that his discovery is news to First Solar, so the company could not have known about it when it filed the patent. (First Solar says it does not comment on intellectual-property issues). Major hopes that the company will take up his team's finding anyway. “It would mean our small-scale lab work can actually have an impact on an industrial scale — and that’s why we do science,” he says.