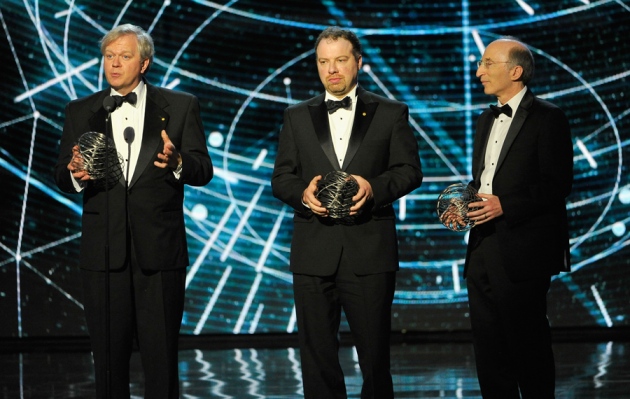 The astronomers who discovered dark energy and the developers of the gene-editing technique known as CRISPR have won Breakthrough prizes. At US$3 million per winner, the awards are science’s most lucrative prize. Winners were announced on 9 November at a gala in the iconic Hangar One at NASA’s Ames Research Center in Mountain View, California.

The first Breakthrough prizes were given in 2012 as a series of physics awards given by Russian Internet entrepreneur Yuri Milner. He soon recruited other online magnates, including Mark Zuckerberg of Facebook, Sergey Brin of Google and Jack Ma of Alibaba Group, to fund awards in life sciences and mathematics. The prizes, which attempt to elevate scientists to pop-culture heroes, have drawn both praise and criticism from the research community.

This year’s Breakthrough Prize in Fundamental Physics was given to two teams of astrophysicists who raced to find exploding white dwarfs in distant galaxies. One group was led by Saul Perlmutter of the University of California (UC) in Berkeley, and the other by Adam Riess of Johns Hopkins University in Baltimore, Maryland, and Brian Schmidt of the Australian National University in Weston Creek. Their work led to the discovery, in 1998, that the expansion of the Universe was speeding up, leaving cosmologists struggling to explain the apparent ‘dark energy’ that is driving the phenomenon. Unlike the Nobel prize, which the three researchers split in 2011, the Breakthrough prize will be shared among all 51 members of their teams.

Six biologists won awards in the life-sciences category, including Jennifer Doudna, also of UC Berkeley, and Emmanuelle Charpentier of the Helmholtz Centre for Infection Research in Braunschweig, Germany. They were honoured for inventing the CRISPR (Clustered Regularly Interspaced Short Palindromic Repeats) system, a technique that exploits bacterial defence mechanisms to enable precise cutting and pasting of the genome.

The ceremony also recognized the recipients of the inaugural Breakthrough Prize in Mathematics, who were announced earlier this year. New Horizons in Physics Prizes for junior researchers went to seven scientists, including researchers exploring the theory that the Universe is a projection of a two-dimensional hologram.

The ceremony was hosted by Seth MacFarlane, executive producer of the US documentary television series Cosmos, and featured award presentations by actors Benedict Cumberbatch, Kate Beckinsale and Cameron Diaz. The event will be televised in the United States on 15 November and in the United Kingdom on 22 November.