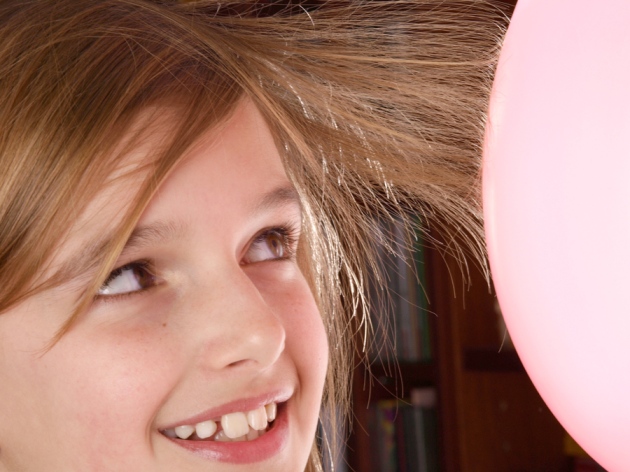 Static electricity is fun when it sticks hair to balloons - but no laughing matter in the electronics industry.

It might be called a shock finding. Coating plastic or rubber materials with antioxidants such as vitamin E stops static charge from building up on the polymer’s surface, chemists report today1. The discovery could prove a cheap solution to problems such as dust clinging to plastic, static electric shocks, or the sparks that damage television circuits and fry computer motherboards.

Children can have fun with static electricity — when they rub balloons on their hair, the rubber and hair stick together because of the attraction between transferred charged particles. But static charge that builds up on industrial components, such as plastic fuel filters on cars or inside semiconductor parts, can lead to potentially dangerous electric sparks and a build-up of dust.

The puzzle with static electricity, explains Bartosz Grzybowski, a physical chemist at Northwestern University in Evanston, Illinois, is that although charged particles should repel each other when they land on an insulating surface, making them spread evenly across a material and leak back into the air, they actually form stable, long-lived clumps. This leads to the build-up of large amounts of tightly confined static charge, enough to abruptly discharge when a conductive path becomes available: for example, shooting through a human body to a metal railing, or sparking through air like a miniature lightning bolt.

Grzybowski’s team reports in Science that it has solved the mystery. The researchers examined under the microscope the patterns of electric and magnetic charge created when charged particles land on polymer surfaces. They discovered that charged particles are stabilized by radicals — reactive molecules with spare, unbound electrons that form when chemical bonds are broken on a surface. The radicals share some of the burden of the electric charge; without them, charged particles would not be able to clump together so tightly. The answer, the team says, is to apply surface coatings that react chemically with the radicals, mopping them up. Such coatings could include vitamin E, among other cheap, non-toxic antioxidants. Some of these chemicals are in fact already added to the blends from which polymers are made, in order to scavenge the radicals formed when ultra-violet light damages plastic - but haven't been used as antistatic coatings.

The researchers proved their case by using solutions of radical scavengers to coat common polymers, such as beads of polystyrene. Sure enough, after being shaken up to gain static charge, the coated beads shed their static electricity within minutes. The scientists also used their anti-static coating to protect a transistor component, showing that it remained undamaged when charged particles were shot at it from an ion gun. “It’s actually quite incredible that the answer is so simple,” says Grzybowski.

Other researchers contacted by Nature found the work exciting. The real advance is the insight into the root causes of static electricity, says Michael Dickey, who researches nano-electronics at North Carolina State University in Raleigh. “It is very clever in the simplicity of addressing an old problem,” he adds.

Dealing with the effects of static electricity is "a very big problem in industry,” says Fred Roska, a researcher at 3M in Saint Paul, Minnesota. He adds that simply finding ways to supply charged particles that neutralize the static charge building up on polymers during semiconductor manufacturing, for example, is a billion dollar market. Industrial firms also deal with static electricity by modifying the materials they use: either by covering polymers with water or gel coatings through which charge can dissipate, or by inserting conductive strips of metal or carbon nanotube into a polymer blend to provide a path for static charge to fade away.

But those solutions involve trade-offs, Grzybowski says, such as making a plastic more conductive, and do not address the underlying cause of the static build-up. And he thinks that the antioxidant coatings will prove a cheaper solution. He says that he has patented the discovery and hopes to license it to companies such as 3M and Dow.