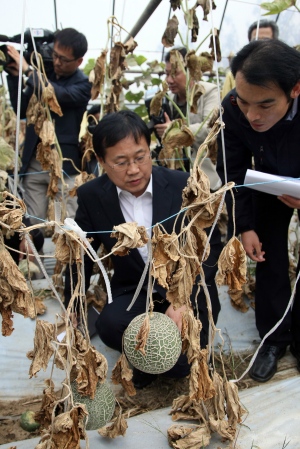 Government investigators survey the impact of a hydrogen fluoride leak.

By mid-December, the chill winter winds had stripped South Korea’s trees bare. But around the city of Gumi, about 280 kilometres south of Seoul, blighted branches still bore a shroud of brown, withered leaves — reminders of the chemical accident that shook the region some three months earlier. At the edges of arable fields, red placards waved in the breeze: “Contaminated by the hydrofluoric acid leak,” they warned. “Not edible.”

On 27 September 2012, about eight tonnes of highly toxic hydrogen fluoride (HF) gas, which dissolves in the moisture in air to form droplets of corrosive hydrofluoric acid, burst from the Hube Global chemical plant in Gumi. The leak killed five workers and injured at least 18 others, including plant employees and emergency personnel.

Thousands of local citizens say that inhaling the acid has damaged their health. Exposure to HF can trigger an irregular heartbeat and cause fluid build-up in the lungs, and the long-term health effects include chronic lung disease. The government has said that it will pay about 36.4 billion won (US$33.4 million) in compensation to citizens and local businesses.

This may sound like a freak accident — but it was not. On 15 January, about 2,500 litres of hydrofluoric acid escaped at a factory in Cheongju, injuring one person. And on 28 January, a worker died during a hydrofluoric acid leak at a Samsung Electronics computer-chip plant in Hwaseong. In the wake of the incidents, experts are raising questions about safety in the country’s research-intensive chemical and microelectronics industries, and the government is investigating what went wrong.

“South Korea tends to focus on resolving accidents only when death occurs, but action to prevent such accidents is still severely lacking,” says Lim Hyun-Sul, a researcher in preventive medicine at Dongguk University in Gyeongju. Lim, who has been treating patients for HF exposure since the 1990s, says that preparation is key. “Protocols must be prepared thoroughly in advance, including education of factory workers, firefighters, medical doctors and public servants about the risks of toxic chemicals.”

Hydrofluoric acid is commonly used by the electronics industry to etch patterns into silicon chips, and as South Korea has become one of the world’s leading electronics exporters in recent years, annual consumption of HF has risen sharply. According to the Ministry of Environment, 26 businesses each handled around 10 tonnes of HF in 2001; by 2010, the number of these large-scale handlers had almost tripled, and in 2011, 545 companies were registered as producers or distributors of the gas.

A mistake by Hube Global workers may have caused the Gumi disaster. Surveillance-camera footage seen by Nature shows two workers attempting to connect a hose to a valve on top of a HF tank. Neither is wearing protective gear. Suddenly, white vapour gushes from the tank, engulfing the workers and killing them instantly. Prosecutors have indicted three Hube Global executives on suspicion of negligence resulting in death, citing the absence of proper safety equipment and a lax attitude to safety regulations.

The disaster was compounded by the regional government’s response. “Both the immediate and the long-term response to the hydrofluoric acid release from the South Korean government seemed to be really chaotic and uncontrolled,” says Neal Langerman, who runs the consulting company Advanced Chemical Safety, based in San Diego, California.

Some firefighters failed to use chemical-protective clothing and self-contained breathing apparatus because they did not initially understand the threat posed by HF. Almost a day passed before they began using calcium hydroxide to neutralize the acid, which is standard procedure after such a leak.

Meanwhile, residents nearby were exposed to HF for about four hours before local authorities decided to evacuate them. The following day, they were told to return after investigators found no HF in the air. But thousands of residents soon complained of nausea, chest pains and rashes, suggesting that the all-clear had been sounded too early. Eleven days after the accident, the national government designated the area a ‘special disaster zone’, and residents began to leave again.

Evacuated residents finally returned to their homes in late December, after investigators reported that hydrofluoric acid concentrations had dropped to safe levels. Officials have allowed farming to resume, and work has restarted at Hube Global. But some experts worry that residents should stay away until there has been a more rigorous assessment of safety at the plant. “Three months is not sufficient time for thorough investigations of this incident,” says Langerman.

Lim adds that long-term monitoring of air and water is essential. “Once underground water gets tainted, there is a possibility that fresh water could become polluted,” he says. A stream that lies just 1.5 kilometres from the Hube Global plant flows into the Nakdong River, which supplies water to more than 10 million people in the surrounding area.

So far, more than 12,000 people have claimed compensation for their injuries, and Woo Kuck Hyeun, an occupational and environmental physician at Soon Chun Hyang University Hospital in Gumi, is leading a follow-up study of those exposed to the gas. “It’s almost an unprecedented case, so we are facing a lot of trial and error,” he says.

Woo explains that the survey is modelled on a two-year health investigation that followed a 1987 leak at an oil refinery in Texas, when 18 tonnes of HF were released (H. H. Dayal et al. Ann. Epidemiol. 2, 213–230; 1992). In contrast to the accident at Gumi, however, the authorities there acted quickly to contain the leak. Within seven minutes of the release, water was used to contain and hydrate the escaping gas; within 20 minutes, a 0.8-kilometre evacuation zone was established.

The response to the Gumi accident has already been the subject of a parliamentary inquiry, and South Korea’s government has promised to establish a centre that will work with local branches of the environment ministry to oversee the use of dangerous chemicals. Lim says that the regional approach is an important step. “Most chemical plants are located out of Seoul, so it’s too late to wait for government agents coming from the capital to deal with an accident.”

Meanwhile, the clean-up near Gumi continues. On 13 December, the government began burning about 9,100 tonnes of crops and trees killed by the gas, leaving the scene of the accident even more barren than before. “Surrounded by thousands of blighted trees, and watching them every day, recreated the trauma,” says Kim Sangho, an elementary-school teacher, explaining why he has not yet returned to his home. “It’s nothing different from the Fukushima accident,” he adds. “What kind of people would buy the agricultural products from my village even if the government says they are absolutely safe?”