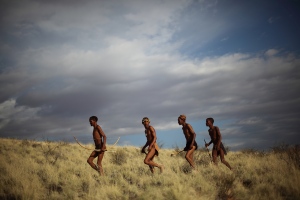 Genetic studies of African bushmen show that even geographically close neighbours have been genetically isolated for millenia.

Two studies exploring the genetics of hunter-gatherers and pastoralists in sub-Saharan Africa, where humans are thought to have originated, reveal that even though the click-language peoples of southern Africa live in close proximity, they belong to two distinct genetic clusters.

To assess the degree of genetic difference, both teams looked at single nucleotide polymorphisms (SNPs) — variations at individual nucleotides between different people — in the DNA of the various populations. One study, led by Carina Schlebusch at Uppsala University in Sweden and published today in Science1, analysed SNPs from 220 individuals belonging to 11 different southern African populations. The other, led by Joseph Pickrell at Harvard Medical School in Boston, Massachusetts, and posted to the arXiv preprint server ahead of its publication in Nature Communications2, examined SNPs from 187 individuals belonging to 23 southern and eastern African populations.

By considering the similarities and differences among the SNPs in the various click-speaking peoples, and comparing them with patterns from other African populations, the teams were able to identify ancestral relationships. Both teams deduced that the southern African click-speaking populations (known generally as the Khoisan) actually belong to two genetically differentiated groups, one in the north and and one in the south of the Kalahari, which went their separate ways around 30,000 years ago. The discovery of this genetic divide is raising numerous questions about how it could have come about.

“It makes you wonder if they became isolated from one another for cultural reasons, or if there was some sort of geographical isolation that led to the differentiation,” says Sarah Tishkoff, a human-origins geneticist at the University of Pennsylvania in Philadelphia.

Evolutionary geneticist Rasmus Nielsen at the University of California, Berkeley, agrees with the idea of the environment being involved. “Africa was very dry during the last glacial maximum, and this might have led to an extended period of smaller overall population sizes, more population subdivision and increased fragmentation,” he says.

Aside from identifying a key time of separation among southern African peoples, Pickrell and his colleagues also discovered an ancient genetic relationship between the south and east of the continent. They found that the Sandawe and the Hadza, east-African hunter-gatherers who speak a click language but are geographically isolated from the other Khoisan peoples, derive roughly a quarter of their ancestry from the southern African click-speakers. This, Pickrell argues, implies the existence of a link having once existed between these peoples.

The possibility of such a connection is important because tensions have been growing among anthropologists as fossil evidence unearthed by palaeontologists increasingly suggests that modern humans originated in east Africa whereas genetic studies have suggested a southern origin. The identification of a genetic link between south and east Africa may help to resolve this conundrum.

Schlebusch and her colleagues also noticed that some of the genes in the populations they were studying seem to have undergone changes due to natural selection since the two southern-African groups split 30,000 years ago. They included genes involved in muscle function and growth and, intriguingly, genes involved in immunity.

The reasearchers found that the more southerly of the two groups carry evidence for selected changes in two immune-related genes, whereas these genes in the more northerly group show no signs of selection.

“This signal could be due to this population having early and extensive contact with European colonists and suffering epidemics such as smallpox,” explains Schlebusch.

Tishkoff says that this again raises the question of “whether these populations were once geographically widespread and experienced local adaptation to different environments”.