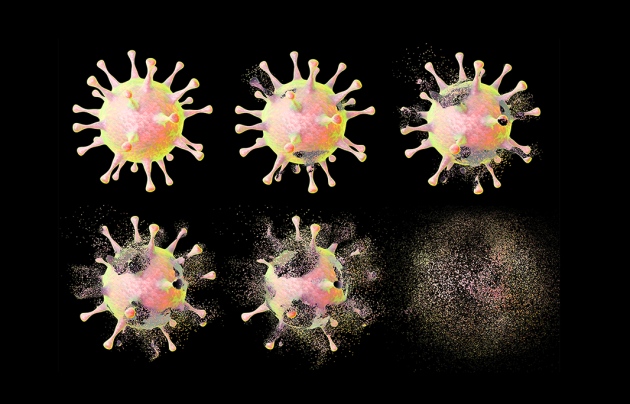 Viruses have evolved to invade the cells of plants, animals and other organisms.

Viruses and their hosts have been at war for more than a billion years. This battle has driven a dramatic diversification of viruses and of host immune responses. Although the earliest antiviral systems have long since vanished, researchers may now have recovered remnants of one of them embedded, like a fossil, in human cells.

A protein called Drosha, which helps to control gene regulation in vertebrates, also tackles viruses, researchers report today in Nature1. They suggest that Drosha and the family of enzymes, called RNAse III, it belongs to were the original virus fighters in a single-celled ancestor of animals and plants. “You can see the footprint of RNAse III in the defence systems through all kingdoms of life,” says Benjamin tenOever, a virologist at Icahn School of Medicine at Mount Sinai in New York and lead author of the paper.

Plants and invertebrates deploy RNAse III proteins in an immune response called RNA interference, or RNAi. When a virus infects a host, the proteins slice the invader’s RNA into chunks that prevent it from spreading. But vertebrates take a different approach, warding off viruses with powerful interferon proteins — while Drosha and a related protein regulate genes in the nucleus.

But in 2010, tenOever witnessed an odd phenomenon: Drosha appeared to leave the nucleus of human cells whenever a virus invaded2. “That was weird and made us curious,” tenOever says. His team later confirmed the finding, and saw that Drosha demonstrates the same behaviour in cells from flies, fish and plants.

To test the hypothesis that Drosha leaves the nucleus to combat viruses in vertebrates, the researchers infected cells that had been genetically engineered to lack Drosha with a virus. They found that the viruses replicated faster in these cells. The team then inserted Drosha from bacteria into fish, human and plant cells. The protein seemed to stunt the replication of viruses, suggesting that this function dates back to an ancient ancestor of all the groups. “Drosha is like the beta version of all antiviral defence systems,” tenOever says.

tenOever speculates that RNAse III proteins originally helped bacteria to maintain their own RNA, and that bacteria later deployed the proteins against the genetic material of viruses. He points out the occurrence of RNAse III proteins in immune responses throughout the tree of life. For instance, some CRISPR systems, a virus-fighting response in archaea and bacteria, include RNAse III proteins. Plants and invertebrates deploy the proteins in RNAi. And although vertebrates rely on interferons for viral control, this study now shows that Drosha still chases after viruses, in the same way a pet Golden Retriever — a dog bred to retrieve waterfowl — fetches a stick as if it were a fallen duck.

Donald Court, a geneticist at the National Cancer Institute in Frederick, Maryland, calls the finding cool, but he doesn’t buy the evolutionary scenario. “RNAse III is involved in many things, in almost all domains of life,” he explains. He sees no reason to think that one antiviral system evolved into the next. For instance, he says, the fact that one CRISPR system includes RNAse III whereas others don’t suggests that the proteins were probably deployed acquired independently and not inherited.

“It’s a really intriguing story, and the data are good, but you’re talking about processes that happened over millennia so it’s hard to know whether it’s true,” says Bryan Cullen, a virologist at Duke University in Durham, North Carolina. Cullen predicts that the paper will prompt researchers who study RNA and infectious diseases to test tenOever’s hypothesis. “The immune system has been under tremendous pressure to evolve as viruses overcome defences, and this paper suggests that RNAse III has played an important role in that evolution,” he says. “It’s like what the Red Queen said to Alice in Through the Looking-Glass: you have to keep running to stay in one place.”