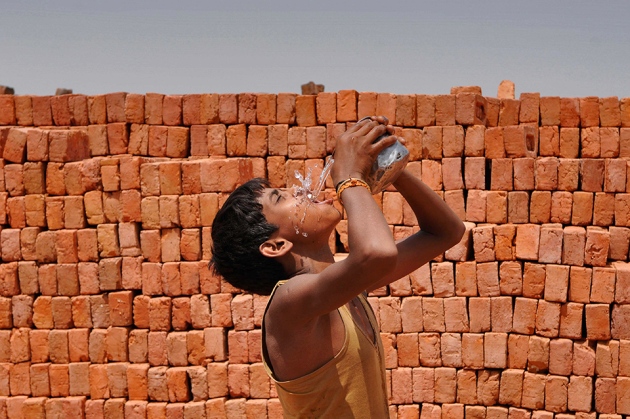 India and several other regions suffered extreme heat in 2015.

Released on 20 January, the global temperature data come from three independent records maintained by NASA, the US National Oceanic and Atmospheric Administration (NOAA) and the UK Met Office. All three data sets document unprecedented high temperatures in 2015, pushing the global average to at least 1 ºC above pre-industrial levels. Although El Niño boosted temperatures late in the year, US government scientists say that the steady increase in atmospheric concentrations of greenhouse gases continues to drive overall warming.

“The reason why this is such a warm record year is because of the long-term trend,” says Gavin Schmidt, director of NASA’s Goddard Institute for Space Studies in New York City. “And there is no evidence that this long-term trend has slowed.”

Average global surface temperatures in 2015 were 0.16 °C higher than in 2014, the next-warmest year on record, says NOAA. Almost all areas of the globe, including both land and sea, experienced above-normal temperatures. Satellite and balloon records of temperatures in the upper atmosphere showed less warming owing to a delayed response to El Niño, but are expected to rise faster in 2016.

“Clearly the 2015 data continues the pattern,” Karl says. “This trend will continue.”

The current El Niño is predicted to continue to boost the average global temperature over the next several months. This could translate into another year of record heat. But the question facing scientists is whether the near-record El Niño that developed in 2015 has helped to flip the Pacific Ocean into a warmer state that will favour the development of such systems in future, and will boost global surface temperatures.

The Pacific Decadal Oscillation (PDO) is a 15- to 30-year cycle that increases sea surface temperatures across the eastern Pacific in its positive phase and produces cooler temperatures in its negative phase. Since 1998, after the last major El Niño and a subsequent La Niña cooling system, the PDO has been mostly negative. Some scientists say that the cooling helped to suppress the increase in global temperatures in the early part of the millennium. But since early 2014, the PDO has been largely positive.

“It sure looks to me like we’ve changed phases in the PDO,” says Kevin Trenberth, a climate scientist at the National Center for Atmospheric Research (NCAR) in Boulder, Colorado.

“If you try to look at PDO and global temperatures, you can come up with a variety of relationships,” says Karl, who questions whether the oscillation is an independent phenomenon or merely an extension of El Nino.

Trenberth notes that the PDO is related to the El Niño–La Niña cycle in the tropical Pacific. That leaves open the possibility that it could fade with El Niño, which models predict will diminish over the next several months. But he says that the PDO is also a result of longer-term fluctuations in ocean currents that push warm water deep into the ocean or keep it closer to the surface.

Jerry Meehl, a climate modeller at the NCAR, has a study under review that suggests that the PDO is likely to remain in a positive state over the coming decade. In that analysis, Meehl and his colleagues plugged actual atmospheric and ocean data from 2013 into a global climate model and then ran the model forward to simulate how the climate might change. The model evolved into a positive PDO and remained there.

“Over the next ten years, we see higher rates of warming,” says Meehl. He adds that this does not change the overall assessment that global warming has proceeded apace over the past century. Rather, he says that global temperatures vary and often increase in stepwise fashion over decades.

Scientists are now trying to understand how ocean circulation works and how much changes in it can affect global temperatures.

“We are still trying to figure that out,” says Meehl. “It’s really intriguing. That’s why it’s exciting for climate science.”