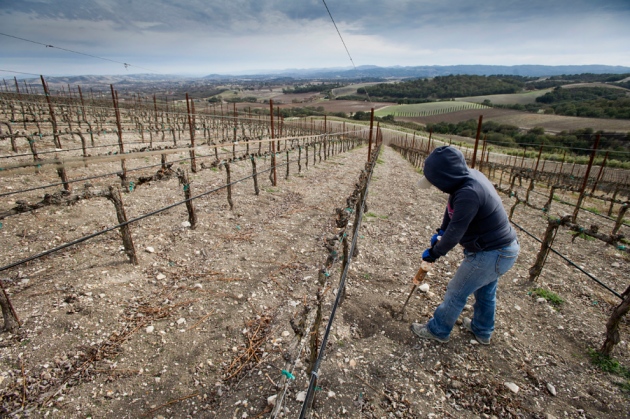 High temperatures in California in 2014 helped drive widespread drought there.

This past year was the hottest since at least 1891, the Japan Meteorological Agency (JMA) said on 5 January. According to the JMA, the average temperature in 2014 was 0.27 °C warmer than the 1981 to 2010 baseline average.

This was not unexpected: in December, the United Nations' World Meteorological Organization released a preliminary analysis of temperatures from January through October 2014 pointing to a record-setting year. The UK Met Office said at the time that its data were in agreement. The US National Oceanic and Atmospheric Administration, which is set to release its final analysis on 16 January, is expected to report the same finding.

The warmth in 2014 is also notable for another reason: the absence of El Niño. Three years that were previously considered to be the hottest in the global record — 2010, 2005 and 1998 — got a boost from the weather pattern known as the El Niño Southern Oscillation, which pushes up air temperatures.

El Niño is marked by the warming of surface waters in the eastern equatorial Pacific Ocean. It occurs when oceans are warm and Pacific trade winds are weak, allowing heat from the waters to be pumped into the atmosphere.

Although Pacific temperatures were high in 2014, atmospheric conditions did not allow El Niño to form. “It is surprising to have record heat in a year without strong El Niño,” says Michael Oppenheimer, a climate scientist at Princeton University in New Jersey. It is a reminder that the Earth is heating up quickly, he adds.

The new high comes after more than a decade during which the rate of temperature rise slowed. This so-called warming hiatus began around 1998, following a particularly strong El Niño that year. Between 1951 and 2012, the average global temperature rose by 0.12°C per decade, compared with just 0.05 °C for the period from 1998 to 2012.

Although El Niño is generally thought to warm the climate, some researchers have suggested that 1998’s strong El Niño changed heat absorption in the Pacific, contributing to the warming slowdown1.

Other researchers disagree that this period of slower temperature rises should be termed a hiatus. “The theory is that rather than a hiatus, the warming temperatures have been collecting in the bases of oceans instead,” says Anthony Barnston, chief forecaster at the International Research Institute for Climate and Society at Columbia University in New York. “But it was harder to tell because we couldn’t measure this well.”

The record warmth in 2014 does not indicate a major change in the continuing warming trend, scientists say. “It’s important to remember that we’re talking about a very small difference between this record and the last,” says Oppenheimer. The JMA's data show 2014's high to be 0.05°C higher than the previous record.

Still, he says, “this should chasten sceptics who have used the past decade’s temperatures to deny that climate change is happening. It’s a reminder that variability happens in both directions, up as well as down.”