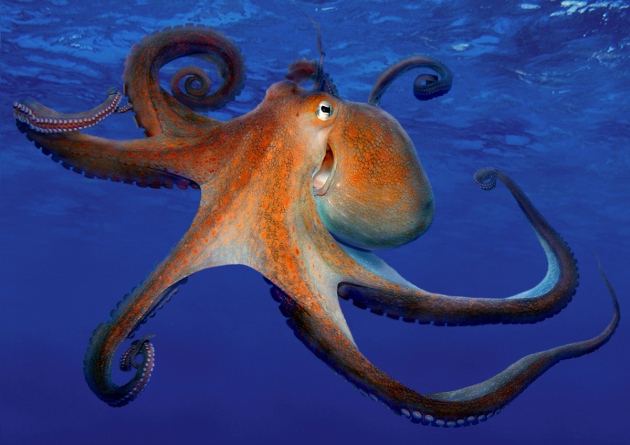 The common octopus (Octopus vulgaris) can rotate its body while moving along a constant line.

To researchers who study how living things move, the octopus is an eight-legged marvel, managing its array of undulating appendages by means of a relatively simple nervous system. Some studies have suggested that each of the octopus’s tentacles has a 'mind' of its own, without rigid central coordination by the animal’s brain1.

Now neuroscientist Guy Levy and his colleagues at the Hebrew University in Jerusalem report that the animals can rotate their bodies independently of their direction of movement, reorienting them while continuing to crawl in a straight line. And, unlike species that use their limbs to move forward or sideways relative to their body's orientation, octopuses tend to slither around in all directions.

The team presented its findings on 10 November at the annual meeting of the Society for Neuroscience in San Diego, California.

The new description of octopus movement is “not how one would imagine that would happen, but it seems to give a lot of control to the animal", says Gal Haspel, a neuroscientist at the New Jersey Institute of Technology in Newark.

Haspel studies worm locomotion, and he was also surprised by the researchers’ report that the octopus pushes itself with worm-like contractions of its tentacles. Different combinations flex together to produce movement in different directions.

Levy, who began the research as part of a project to design and control flexible, octopus-like robots, says that the work could also help to uncover basic biological principles of locomotion.

In one of the most intriguing early results, Levy tracked individual suckers across consecutive video frames, and reported a lack of any mathematical relationship between the lengths of the octopuses' arms, their velocities and their accelerations. Instead of the rhythmic alternations of limb movements that most other animals use, octopuses seem to marshal eight largely independent appendages.

Neuroscientist Binyamin Hochner, the project's principal investigator, says the results suggest that the octopus brain sends out high-level, goal-oriented commands, but leaves the details of movement execution to neurons in each of the arms — which together contain about two-thirds of the animal's 500 million neurons.

The octopus can maintain the direction its body faces even as it changes its overall trajectory.
GUY LEVY

"It's surprising that you wouldn't see some strong pattern of coordination," says neuroscientist Jonathan Dyhr, who studies biomechanics at the University of Washington in Seattle. Whereas the human arm is divided into two main segments for its control — the upper and lower arm — the joint-less octopus arm offers many more degrees of freedom. A basic motor program to coordinate the eight arms would be one way of simplifying the nervous system's task, says Dyhr.

But he and others caution that it is premature to conclude that there is a total lack of centralized coordination of the octopus limbs. Simple motor programmes are ubiquitous among known nervous systems. Dyhr says that, in octopuses, a weak underlying template for crawling motion might be obscured by decisions that the animals make on the fly in response to sensory feedback from the environment.